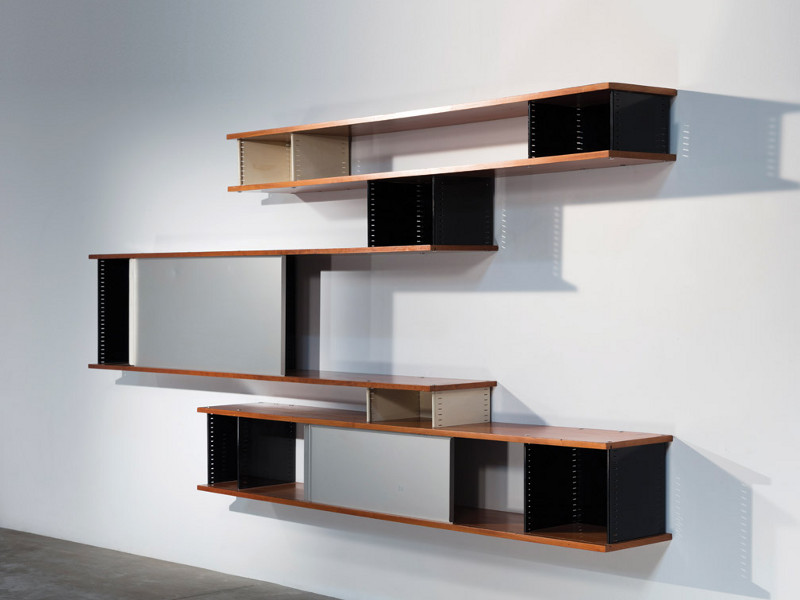 Trailblazing through a male-dominated universe to become one of the leading designers of the 20th century, Charlotte Perriand (1903–1999) always had a pluralistic vision. Her relationship to artists — such as longstanding collaborator Fernand Léger as well as Picasso, Miró and Calder — and the architects Le Corbusier and his cousin Pierre Jeanneret, is intensely underscored in the new exhibition on her work at the Frank Gehry-designed Fondation Louis Vuitton in Paris. So, too, is Perriand’s indefatigable curiosity and versatility, ranging from interior design and architecture that eliminated divisions between rooms, to organising exhibitions. Her furniture is contextualised within this far broader spectrum about ‘the art of living’, revealing the scale of Perriand’s category-defying ambition 20 years after her death. ‘It’s a voyage into the history of art of the 20th century — architecture, painting, sculpture, photography, drawing and tapestry,’ Pernette Perriand-Barsac, Perriand’s daughter, says at the press conference about the exhibition, which she helped to curate. ‘Charlotte used to say: “I was born under a beautiful star with a need to create.”’

The decision to situate Perriand in rapport with other luminaries is set out in the first room. The Chaise Longue Basculante B 306 (1928) — an adjustable, reclining steel chair designed with Le Corbusier and Jeanneret — and Fauteuil Pivotant (1927), the swivel, metal-and-leather armchair designed for her Saint-Sulpice studio in Paris, are displayed in front of Léger’s monumental painting, Le Transport des Forces (1937), depicting power plants and a rainbow. Nearby is a Picasso painting of two nudes that Perriand selected to accompany her proposals to furnish the Musée National d’Art Moderne, then in the Palais de Tokyo, in 1956, and a mobile by Calder. Considerable care has been taken to reconstitute spaces designed by Perriand, starting with the Saint-Sulpice studio (1927–1928); a modern apartment that Le Corbusier, Jeanneret and Perriand presented at the Salon d’Automne in 1929, two years after Perriand joined Le Corbusier’s agency; and a studio apartment created for the International Exhibition of Brussels in 1935. Her ergonomic approach to design is exemplified in her curvaceous Boomerang desk (1938) — reproduced by Cassina — for a magazine editor.

What also emerge are the various streams of influence in Perriand’s oeuvre. Contrasting with her modern, tubular steel designs evocative of industry is her love of nature, stemming from holidays spent at her grandparents’ home in the mountainous region of Savoy. This is evidenced in a low table made from a tree trunk in 1940, among other pieces made in wood and photographs of landscapes and rocks. Perriand’s adaptability is conveyed in her work produced in Japan. Invited by the Japanese government as an adviser on industrial design production (1940–1942), she designed furniture in bamboo that drew inspiration from how the Japanese lived closer to the ground on tatami mats. She returned to Japan in 1955 to curate the exhibition Proposal for a Synthesis of the Arts, showcasing paintings by Hans Hartung and Pierre Soulages, tapestries by Le Corbusier and Léger and her own furniture. ‘In all her exhibitions, she reunited works by her contemporaries to show that art was indispensable to daily life,’ Perriand-Barsac says.

Stretching her artistic ideas further, in 1960 Perriand designed a kinetic wall for the Air France agency in Tokyo, the design appearing differently from left to right. The project came about thanks to her husband, Jacques Martin, working for Air France — Perriand had also designed the firm’s London office in 1957. After he was appointed its general representative for Latin America, the couple moved to Rio de Janeiro. Perriand shifted her language, designing organic furniture and the Rio bookcase (1962) made from locally sourced, caned wood as well as paper-and-bamboo lighting in collaboration with Isamu Noguchi (1963). Cultural sensitivity was similarly reflected in the bright colours of the Nuage bookcase/room partition, manufactured by Ateliers Jean Prouvé, that she designed for the rooms of Mexican and Tunisian students at the Cité Universitaire, a university residency in Paris in 1952. Indeed, Perriand would revise her approach for each commission, inventing a system of leather sliding rails that could conceal paintings and drawings for a Parisian collector’s apartment (1976).

Perriand’s professional hurdles are also documented in the exhibition. After returning from Indochina, where she spent the latter part of the Second World War and gave birth to Pernette, Le Corbusier invited Perriand to design furnishings for the Unité d’Habitation in Marseille (1947–1949). In an intriguing letter on display, Le Corbusier wrote: ‘I don’t believe that it would be interesting now that you are the mother of a family [...] to constrain you to a presence in [my] atelier.’ Perriand’s ensuing kitchen-bar opening on to the living room showed that women needed to be liberated from domestic confines. After being hired by the American architect Paul Nelson as a consulting engineer for the furnishings of Saint-Lô hospital (1947–1955) in Normandy, Perriand’s biggest commission came in 1967. Over the next two decades, she designed the interior architecture and fittings, including prefabricated kitchens and bathrooms, for Les Arcs, a vast ski resort in Savoy. Significantly, Perriand had imagined mountainous dwellings decades earlier. In 1938, she and Jeanneret designed the Tonneau refuge — a shelter for 38 people that could be assembled by six people in three days. After existing only in draft form, this compact dwelling in wood was finally built 70 years later in an eight-person version.

Another early prefab project on show is La Maison au Bord de l’Eau, or House Beside the Water, from 1934, that evolved from Perriand’s entry for a magazine competition. As her design didn’t win, Perriand integrated more comfortable furnishings and sliding windows on the covered terrace, hoping to get the piece realised by other means. Built for the first time in 2013 by Sice Previt, it is exhibited outside, on stilts, overlooking Gehry’s steps of cascading water. This is where the exhibition ends, a testament to Perriand’s tenacity and legacy.