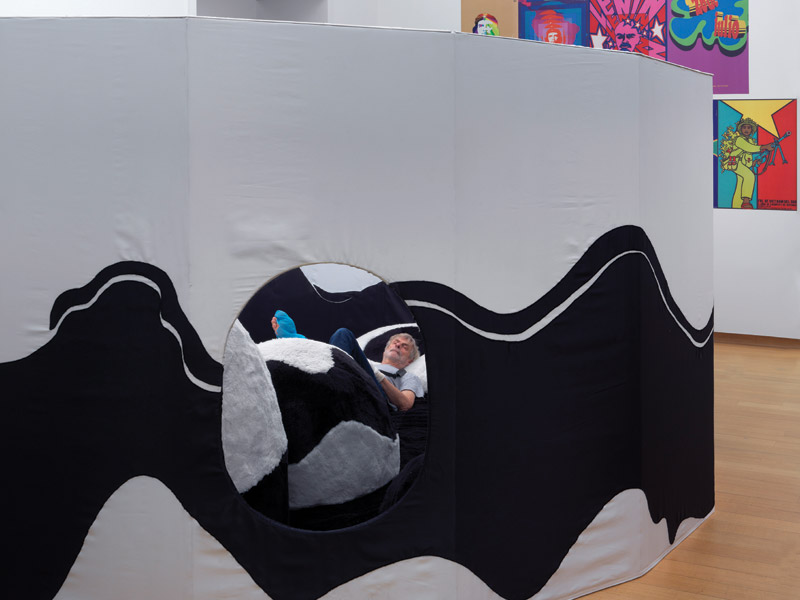 This year has seen an array of events and exhibitions to mark 50 years since the 1968 protests that shook the world. At a time when the tectonic plates of culture and society were shifting rapidly, the actions of those students, workers and minority groups encapsulated the move towards — and demand for — greater equality, liberation and democratic power.

Although it is no sunny story — violence and repression marked many of the protests around the world — for Amsterdam at least, this catalysing of counterculture was more playful and joyful. It is with this sentiment that the new exhibition at the Stedelijk Museum, Amsterdam, The Magic Centre: Art and Counterculture 1967–70, is presented, celebrating the city as a creative haven during this time, an arena in which the pleasures and advances of this social and cultural movement played out. As the exhibition text announces: ‘The revolt in Holland was largely a frolicsome one.’

Curated by Leontine Coelewij, the show spans the era’s developments in art, activism and youth culture, focusing of course on the creations, events and movements unique to Amsterdam — from the drug-friendly youth centre Paradiso that started life squatted by hippies to Dolle Mina, the Dutch feminist group which campaigned across the city for women’s equality. Ferdi’s Hortisculptures (1966–9) on show at the Stedelijk

First, the art. The late Sixties saw artistic practice become more conceptual, immersive and boundary-pushing. It began to move out of the gallery space and interact with natural and built landscapes, as well as people. Eventstructure Research Group (ERG) was founded in 1968 in Amsterdam by Jeffrey Shaw, Theo Botschuijver and Sean Wellesley-Miller, and performed playful happenings and interventions in the city using inflatable structures. These experimental structures invited people to interact, play and experience the city in new ways — from running on water in an inflatable pyramid (Waterwalk, 1969) to walking through a PVC tunnel in the middle of a park (Pneutube, 1968).

The city and its streets also became a platform for artist Tjebbe van Tijen’s Continuous Drawing Project in 1967, in which — with public help — van Tijen drew a decorative line from the Institute of Contemporary Arts (ICA) in London to the Stedelijk in Amsterdam, and from there to Rotterdam, using buildings, walls, streets and people as a canvas.

Innovations of course happened within the gallery realm, too. On show at the Stedelijk is Maria van Elk’s Soft Living Room (1968) — an abstract, black-and-white, immersive landscape with undulating mounds made out of artificial fur and foam that visitors can climb inside of and relax in (indeed, it is the only interactive part of the show). Described as a ‘social sculpture’, the work was also installed in a youth centre in Amsterdam soon after van Elk created it, in order to provide a comfortable and communal space for the city’s young people. Alongside the art on show sits the activism of the period. In 1969, the Stedelijk hosted an exhibition about the May 1968 student protests in Paris, featuring leaflets, posters and activist material. Those are re-installed in this year’s show alongside photographs of the protests and an array of Holland’s radical publishing from the era, illustrating the preoccupations of the counterculture, as well as the way it shaped developments in graphic design.

A dominant form of activism in Amsterdam in the late Sixties and early Seventies focused on housing — in particular, the lack of an affordable supply of it. At the time, much of Amsterdam’s housing stock was dilapidated and in decay, and whole neighbourhoods were slated for demolition. Angered by such destructive plans, activist Rob Stolk and others founded a squatters’ housing association, Woningburo de Kraker, in 1968, campaigning for affordable housing. The group also produced the ‘Squatters’ Handbook’, giving practical advice on how to save a building through occupation.

In 1970, activist Roel van Duijn launched the Kabouter Partij (Gnome Party), a political group focused on utopian, anti-consumerism, environmentalist ideals. The party campaigned to improve the quality of life in the city — including more green space, more affordable housing and fewer cars. We might think of Amsterdam now as a cycle-dominated, eco-friendly city, but it was in fact efforts like those of van Duijn that countered the powerful car lobby in the Seventies to achieve that. Amsterdam’s activism of this time was by no means dominated by men, however. The Dutch feminist group Dolle Mina, founded in 1969, campaigned and protested across the city for women’s equal rights, using both frank and humourous methods. The photographs, descriptions and film footage of their actions seem to provide the guts, and laughs, of the Stedelijk’s exhibition. We see Dolle Mina members confront a male editor of a magazine asking why there are no female editors; wolf whistle at men on the street to subvert sexist behaviours; protest en masse for the legalisation of abortion and use of the contraceptive pill with the words ‘baas in eigen buik’ (masters of our own belly) scrawled on their bare abdomens. The most uncanny aspect, of course, is how contemporary their actions feel — such demands and demonstrations are still being made today in women’s marches, #MeToo stories and the continued attempts to globally legalise abortion.

The exhibition is part nostalgia (for those who lived through those years), and part rose-tinted storytelling. There’s not much that challenges or surprises the visitor — although the film reels of original news footage of protests and youth culture is fascinating to watch. Coelewij certainly approached it as a celebratory exhibition — though with this tone, more could have been done to make the show an immersive, interactive, pleasure-filled experience. But it unfolds more like a historical archive — and for a historical exhibition, it has somewhat airbrushed gritty realities out of the story.

Nevertheless, the show presents the visitor with an opportunity to stop, look back and reflect — and the (likely unintentional) takeaway ends up being the realisation that 50 years on, these radical movements in search of greater equality, inclusivity, democracy and freedom have not resulted in as much progress as those young people of the 1960s might have hoped.