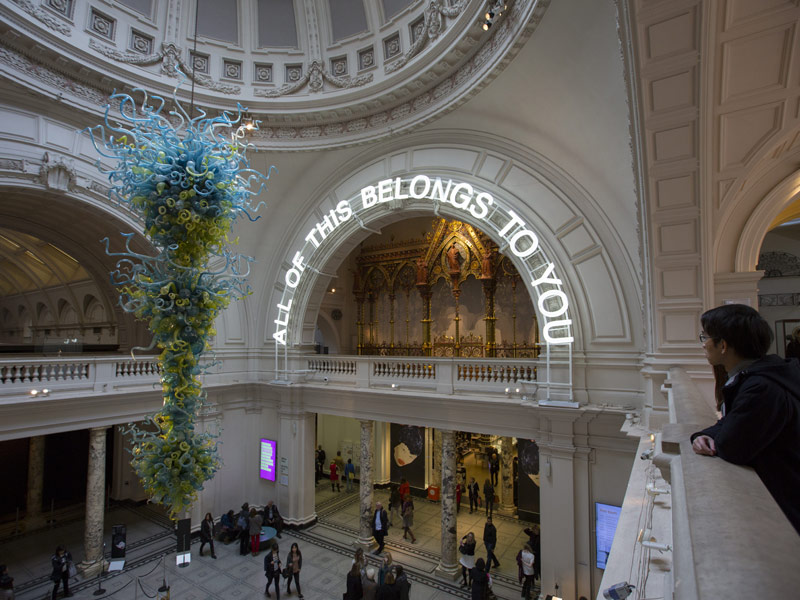 The V&A’s latest exhibition ‘All of This Belongs to You’ uses spectacular commissions, recent acquistions and historical objects to propose a critical, democratic discourse around issues of publicness, privacy and ownership. Shumi Bose finds the ethos of the show to have its roots in the museum’s radical past, as well as pointing the way forwards for its East London future...

When the civil servant Sir Henry Cole helped to set up the Victoria and Albert Museum in 1857, he embedded some pretty radical ideas within its ethos. Hot on the success of the Great Exhibition and capitalising on the interest in industry and innovation, Cole's ideal was to create a space for public appreciation and discourse, surrounding the objects and artefacts increasingly informing 19th-century life. This was to be done both through British Empire acquisitions and the advances to contemporary domestic and civic life.

Where extant institutions such as the British Museum would largely be used by gentleman scholars, the Victoria and Albert was the first museum or cultural establishment to be open in the evening - it also had artificial lighting and a public cafeteria - meaning that the ordinary working man or woman could visit the collection after a day's toil. If not educational in the academic sense, its purpose was nevertheless to encourage the capacity for public discernment: to stimulate a discourse around design and public life. The Ethics of Dust, a giant latex cast by Jorge Otero Pailos of the interior of 19th century cast of the Trajan Column in Rome. Photo: Peter Kelleher/Victoria & Albert Museum, London 2015

The museum's current exhibition, All of This Belongs to You, takes a similarly radical, self-appraising stance, engaging the long narratives around its historic as well as its recent 'rapid response' acquisitions. The exhibition is spread around the museum; as well as four specially commissioned pieces and displays, a range of 'civic objects' have been selected from the V&A's permanent collection. The dispersed exhibition and accompanying events examine the museum's role as a public entity, providing not only the possibility of appreciating interesting objects, but an chance to interrogate the subject of 'publicness'.

The spirit of AOTBTY is best encapsulated in the display of Edward Snowden's hard drives, which held documents leaked to The Guardian newspaper and were subsequently ordered to be destroyed by the UK Government. A security guard's hi-vis jacket is mounted alongside a display on the ongoing King's Cross redevelopment, at the entrance to the architecture gallery. A couple of acquisitions from the last Venice Biennale take the discussion further afield - including the Italian Limes project by Studio Folder, which focuses on the constant GPS-driven negotiation of the Austro-Italian border. Issues around privacy, security and responsibility around ownership and data, have never been more prevalent. All Of This Belongs To You uses objects from diverse fields to frame questions around the contributions of art, architecture and design to civic life.

The museum's biggest object - a full-size cast of Rome's Trajan Column - is also the subject of the show's largest special commission. The Ethics of Dust by New York-based academic and artist Jorge Otero-Pailos has used conservation latex to take a 'meta-cast' of its internal structure. The resulting 'ghost' column is illuminated from within, easily holding its own in the spectacular surrounds of the Cast Courts. Or at least it seems to hold its own - in fact it hangs from the ceiling, but the genius stroke of 'standing' the pillar on a highly mirrored, shallow plinth baffles the eye.

Elsewhere, British architecture practice MUF proposes what it calls 'reverse restitution' in the museum's Medieval and Renaissance gallery, not by restoring displayed objects to their original locations but rather by bringing the ongoing narratives behind their historic contexts back into the museum. Modest videos show the continuing life of churches and related charitable associations; in the absence of the exquisite icons long removed to the august environs of the museum, benevolent activities continue on site, enacting the humanity represented by the removed religious sculptures. MUF has also inserted soft furnishings and communal seating in the gallery, which challenge museum conventions and allow the space to be inhabited in different, more informal ways.

Long narratives and archival histories are also mined in James Bridle's Five Eyes - named for an alliance of global intelligence bodies - an installation in the climate-controlled tapestry rooms on the third floor. Amid the hum of air-conditioning sensors, five vitrines show objects assembled and juxtaposed by a contemporary tool - a digital algorithm - that sifts through the stacks of files and information relating to more than 1.4 million artefacts in the V&A collection. The algorithm indenties common threads in the archival data of, for example, a nutcracker, an aboriginal boomerang and a feathered tiara.

Curated by Corinna Gardner, Rory Hyde and Kieran Long, the triumvirate who comprise the museum's architecture, design and digital department, All of This Belongs to You is particularly interesting in terms of its attitude.And indeed, it is an attitude indicative of the V&A as an institution, moving forward. This is particularly so in light of its prospective new outpost in 'Olympicopolis' - the new cultural hub planned for The Queen Elizabeth Park in East London (E20). The plans for the area also include a studio and theatre for the Sadler's Wells dance company and new campus buildings for the London College of Fashion and University College London. Developed in collaboration with the London Legacy Development Corporation, the cultural quarter will be the site for a 20,000 sq m space for the V&A, complementing its historic home on Exhibition Road. Alongside permanent galleries, the V&A E20 will host the UK's first museum space documenting 'the full breadth of digital design', as well as studios hosting residency programmes for emerging artists and designers. Construction is due to start in 2018 and the building is currently in phase two of a design competition.

V&A director Martin Roth has professed the aim of creating 'a new model for museums of the future, where reserve collections and archives are visible and accessible all of the time, and the public can really be engaged with their national collections'.

It is this idea of public engagement - in terms of a critical reflection of ownership, responsibility and the role of design in the contexts of everyday life - that is bravely tested in the current exhibition, which runs over the UK election until 19 July. As a statement put forward by a publicly funded institution, the show's provocative title is a reminder that there are questions to be asked and opportunities to be had when you realise that 'all of this' really does belong to you.