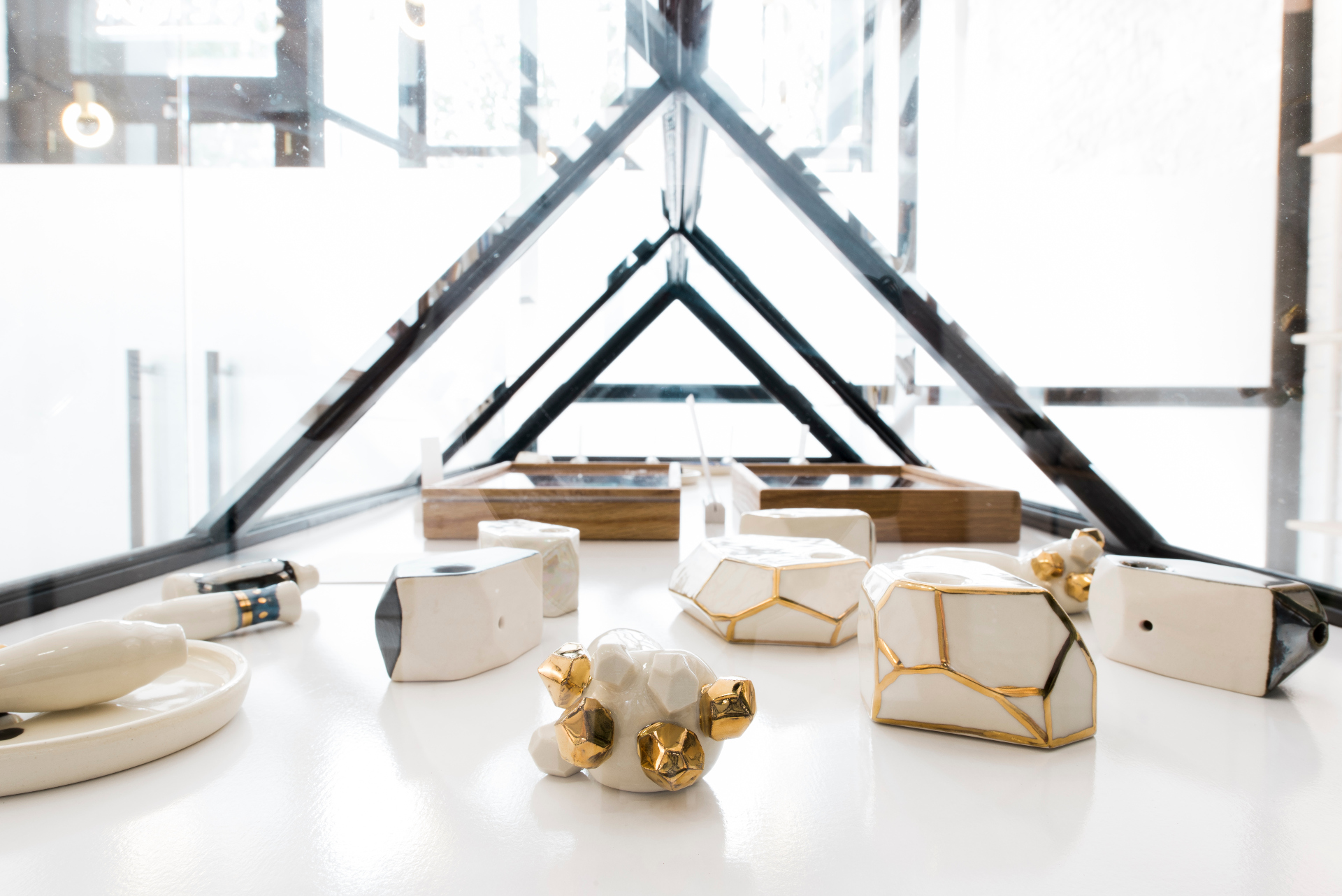 Architects and designers are being courted by retailers looking to distinguish their brands, as marijuana gains a license for recreational use in a growing number of US states

As marijuana gains a licence for recreational use in a growing number of US states, architects and designers are being courted by retailers in this new high-value category looking to distinguish their brand with a compelling look. The stakes are high – US sales are expected to triple to $30bn in the five years from 2018, the year cannabis came out of the closet in the largest market, California, to 2023, by which time dispensaries are expected to have a high-street presence across most of the country.

‘It’s the new gold rush,’ says Ramon Alonso, co-founder of Commune, which has gone from designing London’s Juicy Couture boutique and Gwyneth Paltrow’s Manhattan Goop store to an LA dispensary fielding gold-plated ceramic pipes intended as handbag accessories as well as rarefied pot to pack into them: ‘It’s the first wave, so you go in knowing everything is going to change.’

While most operators agree stores dispensing a legal high should distinguish themselves from typically dark and austere predecessors accessible only with a prescription, they are far from united over what kind of retail image drives footfall. High-concept cannabis dispensaries range from the rustic to the cutting edge, bright and white to warm and womb-like, with levels of branding that vary from minimal to the extremes which has won MedMen, market leader in high-design cannabis emporia, the epithet Apple store of the marijuana business.

MedMen’s scarlet-jacketed bud-tenders and the relentless red of the man-friendly merchandise displayed in their windows seems at odds with the state of mellow sought by most marijuana users – the look is distinctly masculine, even though like other big players, MedMen have cited middle-aged women as a target market. Which may be why female architects and designers are so sought-after in this field, creating stores which could be mistaken for boutique hotels, jewellery stores and beach clubs: ‘We’re showcasing the LA lifestyle,” says Terri Gilles, chief operating officer of Sweet Flower, a chain of dazzling white dispensaries for which designer Deborah Ross spec’d surfing videos and beach photography, giant flower paintings, white wainscotting and olive trees in planters.

The McBride Company, designers who believe playfulness and a sense of wonder are essential to the shopping experience, have hired a former VP of Imagineering from Disney to create theme park-like stores for Grass Monkey in Portland, Maine and Pineapple Express, due to open in California.

But this is not necessarily nice work if you can get it – dispensary design taxes architects with fulfilling the precise and complex requirements of highly-regulated back office space where controlled substances must be stored, secured and separated, and laws in some jurisdictions which require integrating the ‘man trap’ of the medical marijuana era– a tight reception area where ID is checked before clients are admitted to the shop: ‘Where these are required we make glass ones to create more of a vestibule,’ says Ross.

There is also the tricky business ot trying to satisfy a new kind of client who is pressed for time and can be impatient over refining detail: ‘Some totally get the value of design, but others don’t have the patience to get it right – having got their permits, they want to be up and operational as soon as possible,’ says Nicole Delmage, a partner in Merj, an architectural practice dedicated entirely to marijuana infrastructure. Whatever the challenges and legal restrictions, the possibilities for design innovation are limitless, says Alonso, noting: ‘There are a million rules - and no rules.  It’s the Wild West, and that’s exhilarating."

By far the largest cannabis retailer in the US, MedMen is big on branding but uncertain whether its aesthetic is more rustic Whole Foods or pristine Apple Store, as its Fifth Avenue store in Manhattan would suggest. The company, which designs all its shops in-house,has made a huge investment in 34 stores across nine states, but lack of operating profit has led to recent staff layouts and a downgrading of its publicly-listed stock.

The high-profile West Hollywood store was packed mainly with young men and tourists on a recent visit, a world away from the sleek, pared-back Fifth Avenue store MedMen opened in 2018 at a cost of $26.5m.  The frontage of the Manhattan boutique is white, as opposed to signature MedMen scarlet, with vaulted ceilings, corniced white walls and arches replacing a quotient of the somewhat claustrophobic floor to ceiling wood panelling which a signature of all MedMen interiors.  But although subtle chic is considered a watchword by many LA dispensaries, MedMen has reverted to a bold red frontage for its new Venice branch and Florida stores.

With chandeliers, long panelled bars equipped with footrails and the black and white floor tiles which signify old San Francisco, Apothecarium resembles a boutique hotel rather than a dispensary. This is intentional: ‘Welcome is the watchword,’ says Vincent Gonzaga, the architect charged in 2013 with helping the company transition from one small medical  dispensary to four expansive outlets for which CEO Ryan Hudson says an older woman he met in the queue at a medical dispensary was his muse when moving into recreational retail.   ‘He wanted to make people feel comfortable, not in any way as if they were going into a drug den,” says Gonzaga, who collaborates with interior design firm Urban Chalet after getting new buildings in place.

Constantly surprised, he says, by the number of people he meets in their 60s and 70s who shop at Apothecarium, he feels the design team have met the aim of dispensaries in which even a grandmother would feel comfortable shopping.  A key design element in all branches, apart from a uniform shade of Benjamin Moore dark grey paint, is the curved reception desk inherited from a restaurant on the site of the flagship which was kept, along with an elegant seating area where customers wait to be served: ‘though we are now also putting in kiosks for people who know what they want and prefer to order it on an iPad and pick up wthout a wait.’  Following the $118m acquisition of Apothecarium this year by Toronto firm TerrAscend, a Las Vegas outlet is being updated in the style of the three San Francisco branches and a new, larger store will open in spring across the bay in the university town of Berkeley.

A folding ceiling, shimmering floor and nightclub lighting are among the dramatic elements with which Nicole Delmage has infused a 420 square-metre space unpromisingly sited on a commercial strip at the edge of a multi-lane highway in Thornton, Colorado: ‘Medicine Man does have a store in Denver, but this is their flagship, with a high design aesthetic,’ says the architect who designs for every aspect of the marijuana business from cultivators and laboratories to processing plants.

Delmage echoed the M’s of the client logo in a dramatic ceiling which drapes in folds of Ipe timber, and created a floor of liquid epoxy resin which reflects the acid hues emitted by display walls equipped with an RGB colour-changer.  A sculpted steel screen composed of motorcycle rotors is a show-stopper, but the real wow factor, she says, is a cylinder nearly two meters in diameter dropped into the floor and circled with LED lights: ‘People like to lie down on it and take selfies.’ The total spend, including upgrading the external architecture, was just £1m: ‘We have made it our calling card; it shows we can create work on par with companies which have much bigger budgets,’ says Delmage of this, her practice’s first dispensary.

‘I wanted to create a place I could take my mother and my grandmother shopping for cannabis,’ says Cambria Benson Nocker, co-founder of Serra, a dispensary in Portland, Oregon in the throes of expanding to a large new premises in Los Angeles.  On West 3rd Street, prime territory for LA’s existing big-name dispensaries, an old automotive store is being transformed into an iteration of the jewellery-store model the founders of Serra created ‘to sell beautiful objects and create a very high-end cannabis experience.’

A clear inne glass wall and display cases resembling cold frames address the inspiration for the Serra name – ‘it’s Italian for greenhouse,’ says Benson Nocker, who also specified a living wall as a key feature of the design for Portland.   Interior design firm Commune has been tasked with preserving signature elements and bringing their talent for showcasing high-priced objects like designer spectacles to displaying the gold-plated pipes and other smoking accessories unique to the brand: ‘We don’t see a difference between eyewear and cannabis,’ says Commune principal Roman Alonso, who says the chief challenge of the build is addressing the difference in quality of light between Portland and Los Angeles.

Of all new-wave dispensaries, Seattle’s Reef, clad in commissioned street art, looks the most like a marijuana dive, recalling the head shops of the 60s and 70s frequented by users at the top end of the target demographic. It’s a nod to the location on Capitol Hill, which Kirsten Murray, lead architect and a principal of Olson Kundig, which has more dispensaries in the works, credits with: ‘a long iconoclastic history where many different things have happened.’

She created a bright open space within a dilapidated building which previously housed a pizza restaurant and a car showroom: ‘The idea was to celebrate the accessibility of a newly legal product with everything transparent and showcased in glass.’ Her vision was slightly at odds that with that of an owner wanting to create an inclusive environment for a diverse community, she admits: ‘I didn’t want people to come into a place that felt like a convenience store, with stuff hanging all over the place, but he didn’t want anything too sanitised.’

Reef operates as a farmer’s market for local growers, who come in to present their own product, but Washington’s conservative laws means tightly controlled displays: ‘In this state you can’t buy loose flower, and even if you buy a joint, it comes in a little plastic container,’ says Murray, who created signature pods to showcase products.