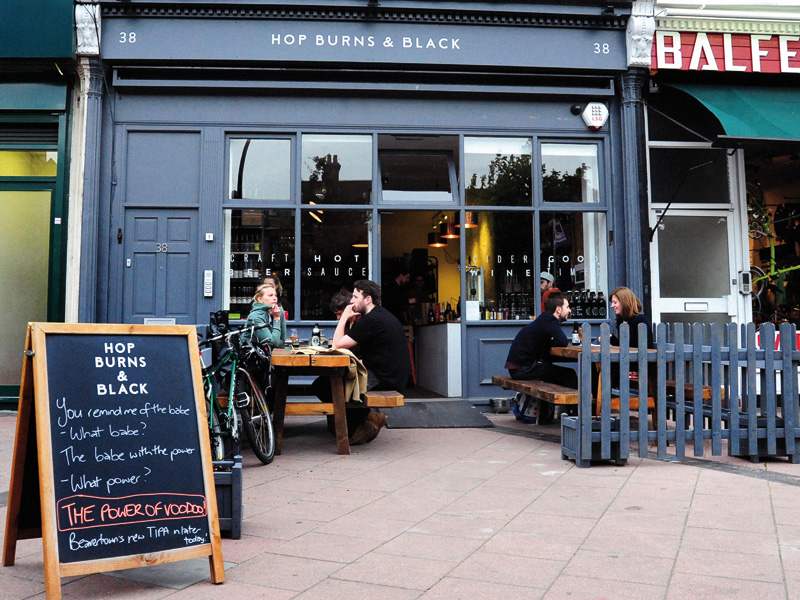 We take an in-depth look at four very different retail environments, from a food and drink outlet that sells records to an order-only clothing store, a refill shop and more.

A name combining a noun, verb and adjective trumpets this shop as a break from convention. As the name alludes, Hop Burns and Black in south-east London stocks a vast selection of craft beer and chilli sauces, alongside vintage records. Founders Jen Ferguson and Glenn Williams have designed their store so that the products are the heroes. This is aided by plenty of striking label graphics on the bottled items, which are packed in deep and high along two walls. An original brick wall was saved from the builder's sledgehammer

They are displayed on black shelving units made from steel piping and timber, made by Geoff Walker of Re-Fuze.

The colour allows prices to be chalked up below the products. While the retail offer is unexpected, the interior aesthetic is in keeping with many an independent outlet with an artisanal bent.

The two New Zealander founders viewed the shop in the early stages of its conversion by the building's owners from a laundrette. They were just in time to stop the builders from 'boarding up a beautiful red brick wall', says Ferguson. The counter, which stands in front of this, was also by Walker. He specialises in making furniture and shop fit-outs using reclaimed materials. The counter top was upcycled from a salvaged lab workbench

'This aligns strongly with our approach towards sustainability,' says Ferguson. So, the counter top is a salvaged old science-lab workbench, and the little tables inside the store in front of the windows are made from old church pews, with a hinge that allows them to fold down at night so that security shutters can be lowered.

Walker made the shades for the lights over the counter out of leftover copper sheeting, and the other pendant lights were salvaged from the builders' skip.

The branding by Samuel Muir comprises a series of four interchangeable logos, and Osaka-born, Barcelona-based artist Yoshi Sislay created a freehand mural in marker pen in the far corner of the shop.

Often an out-building not attractively stocked with local produce, some farm shops have taken steps to reinvent themselves. And many of those are increasingly upmarket.

The farming family that runs Keelham doesn't see itself as competing with these foodie destinations however. Instead, the shop is a grocer's-cum-deli that challenges the food offers of supermarkets. 'A lot of farm shops are unnecessarily expensive,' says Ian Thompson, of branding agency Thompson Brand Partners, 'where people supplement their shop with a bit of quality food that's higher price. Why can't farm shops be the place where you buy all your groceries?' Keelham's owners are 'committed to offering locally sourced fresh produce and to keeping prices down', he adds. The Leeds consultancy had created Keelham's branding, and was then persuaded to take on the interior design of the 1,850 sq m shop, which opened last summer in Skipton.

The shop is housed in a former car showroom originating in the Thirties, and while there are some standard modern gondolas, much of the fixtures and fittings are recycled -- such as the tables and milk churns from a North Wales vintage dealer (dealers-uk.com). The intention was to go old school. 'We looked at things that worked when we were young,' says Thompson, citing big tins of homemade biscuits, from which customers can pick and mix into a brown paper bag.

In contrast to supermarkets' brightly illuminated fresh fruit and veg areas featuring super-clean, glossy produce, 'We've not over-lit the products, and have loads of natural light, which supermarkets hate because they want to control that environment,' says Thompson. The wall behind Keelham's fruit and veg area is painted in Dulux's Highland Falls 2, a pleasingly dull green, rather than white 'as it would feel natural with the fruit instead of stark', he adds.

Old Town is a long-standing outfitters in the small town of Holt, which carries no stock. Customers -- who tend to be in the creative industries, and include the National Portrait Gallery's director Sandy Nairne -- must place an order, and items are made up by local machinists and delivered in four to six weeks. The collection rarely changes from year to year, and this fact combined with the simple styles and the long lead times makes Old Town an antidote to 'fast fashion' high-street or online shopping. 'I'm sure our way of doing things must put some people off, but there are others who are more than willing to wait. Like the slow food movement, it makes it more special,' says co-founder Marie Willie. Some other clothes shops she describes as 'a soulless experience.'

Willie and co-founder Will Brown, who handles the garments' design as well as the store's graphics, were early adopters of the nostalgic, vintage aesthetic. But, last year they redesigned the shop to shake that image off. Front window graphics was designed by the shop's Will Brown

'It looked a bit too like an old store, and everyone's doing the dreaded heritage look now,' says Willie. They have ditched that in favour of a cleaner, contemporary look.

The original Post Office counter was sold off to London reclamation business Retrouvius, and it was replaced with a long birchwood-ply cupboard with a pale blue Formica top, made by Norwich-based Stuart MacCallum. Dotted around the shop are three-legged VITOS stools by Paolo Cappello for Italian brand Miniforms.

Brown designed the decal for the front windows, as well as the 'styles board', a graphic rendition of all Old Town's styles. 'That's the most useful bit of kit in the shop,' says Willie. 'It's easier than looking through a rail of clothes.'

Some 70 garments per week are sent to customers in big, shallow, heavy duty cardboard boxes, made by Bridgeshire Packaging and Display in Derbyshire.

It's the brainchild of Catherine Conway, who set up and ran Unpackaged, a groceries refill corner shop in Islington. 'Planet Organic is the first UK chain to really put its weight behind the idea that refilling could work in a supermarket setting -- with the right technology and demand from customers,' she says.

In some countries, including New Zealand, there is a strong tradition among customers of taking empty containers shopping and filling them up from large bins of foodstuffs and other unpackaged items. But, fully automating a self-service system for a major retailer has been complex. Fill up and weigh in is at refill outlet Planet Organic

Conway wanted to create a system which was as simple and straightforward as possible. She commissioned design agency Multistorey to create some step-by-step wall graphics for the refill area. These explain the process: Weigh the empty container to get its weight, print a empty weight label and stick it on the container. Fill the container with a product, key in the product type at the scales, enter the weight from your first weight label and place the filled container on the scales. A second label is printed, which the shopper sticks on to the container, and then it can then be paid for at a till point. Products stocked include coffee beans, rice, seeds and wine, but Conway believes that there is no limit to what can be sold as a refill. 'I believe everything can be solved with good design, she says.