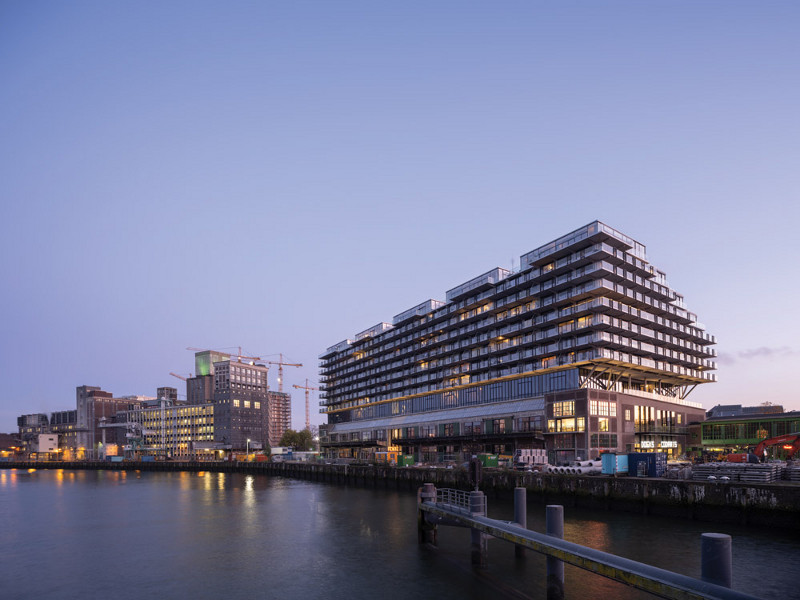 A historic dockyard warehouse in Rotterdam has been given a new lease of life as a mixed-use cultural and residential hub by Mei Architects and Planners, turning this once proud industrial building into a beacon of regenerative ambition.

Rotterdam has never been a city shy of ambitious relandscaping. As passenger and freight shipping boomed in the early 20th century, huge chunks of the city’s waterfront were excavated to create additional docks, and giant industrial sheds materialised where there had been peaceful farms and holiday homes, in order to service Rotterdam’s ambition to be at the heart of Europe’s shipping industry.

In its original, 360m-long, 1922 iteration, the San Francisco warehouse on the Katendrecht waterfront was the world’s largest harbour warehouse. Its interior was so cavernous it required two internal train tracks to process goods and luggage fast enough, and 13-car freight elevators were used to transport lorries up to the first floor to load and unload. It was named the San Francisco warehouse due to its being the key repository for the worldly goods of emigrating passengers heading for California, courtesy of the Holland America Line. Its two-storey roof was lined with cranes, its rough concrete facade characterised by large loading decks, and huge metal doors, painted green. The warehouse was badly bombed in the Second World War and consequently patched up and split into two; renamed the Fenix I and Fenix II in the 1950s, the structures remained active until Rotterdam’s docks were moved north in the 1980s. That kinetic energy and engineering ambition — as well as the history and character of the original building — have been nicely harnessed in Fenix I’s latest incarnation, a 45,000 sq m project courtesy of Rotterdam-based Mei Architects and Planners. The rumble of goods yards has been replaced by the pulleys, aerial acrobatics and breathtaking gymnastics of students and performers at Rotterdam’s leading Codarts Circus School and Circus Rotjeknor, its interior spaces also transformed into rehearsal rooms for the leading Dutch contemporary dance group, Conny Janssen Danst. These new tenants, enjoying the 6m ceiling heights of the former warehouse’s ground and first floors are part of a strategy to breathe culture into the heart of this mixed-use building, turning Katendrecht into a new cultural cluster for Rotterdam.

Meanwhile, the residential apartments that justify the investment in this previously derelict dockyard, are perched on top of the historic concrete shed, via a similarly daring engineering feat: the placing of a giant steel table over the top of the original building — requiring one kiloton of steel. Unusually, its component parts are welded, rather than bolted, together, to keep the frame as lightweight and slender as possible. Its grey-painted columns are visible throughout, whether in circulation, rehearsal or office space. Along the southern facade, windows have been rebuilt to mimic the shape, materials and style of the building's original 1920s ones. Image credit: Ossip Van Duivenbode

The 212 apartments are stacked from four to nine storeys above the historic structure, peaking along the northerly, riverfront aspect, their height a nod to the unfeasibly slender towers of OMA’s De Rotterdam clearly visible across the water, behind the iconic outline of the original Holland America Line’s HQ, now the Hotel New York. The apartments descend in steps to four storeys along the southern facade, keeping that elevation more in tune with the surrounding 20th-century residential architecture, and ensuring that southern light and sunshine reach into the central courtyard as well as the rear of the north-facing blocks.

There is definitely something triumphal for both architect and developer (Heijman), as they lead the first group of journalists around the finished, newly occupied spaces. Heijman first approached the City of Rotterdam 14 years ago with an unsolicited proposal to transform this then undesirable neighbourhood by restoring the Fenix I and its neighbouring warehouse, Fenix II (currently animated by meanwhile uses, it will close in early 2020, to be transformed into a Museum of Immigration). The internal, ground-floor 'street' contains large glass windows reavealing the circus rehearsal and training spaces on one side, and the parking garage on the other. Image credit: Ossip Van Duivenbode

But it has been a long, slow haul, with a huge amount of cultural programming and numerous interventions to try and draw the Rotterdam people over to this formerly dodgy area. Unlikely appearances in this derelict shed include the Rotterdam Philharmonic, while Fenix II’s meanwhile tenants have brought new life and visitors, thanks to pop-up restaurants, bars, a street food market called The Fenix Food Factory (which will be moving into Fenix I shortly) and the first iteration of the Circus Arts school, which has now made its permanent home inside Fenix I.

What the developer didn’t want to lose was any of the character of the original warehouse, in its 1920s or 1950s incarnations, which is why Mei Architects’ more time-intensive and craftsmanlike proposal was the one they chose. As much as possible of its overlapping structures has been expressed in the new version, including the outline of the sloping ‘tripod’ roof that was built in the 1950s. That slanting roofline now has a disconcerting presence against the more orthogonal outlines of the first-floor rehearsal space for Conny Janssen Danst. White concrete and metal elements are paired with wooden cladding panels along the apartment exteriors; the panels range from pale to warmer tones as the storeys rise. Image credit: Ossip Van Duivenbode

Elsewhere, sections of bomb-blasted concrete are left, as part of the architectural jigsaw, along the interior of the older, 1920s southerly facade, the windows of which have been rebuilt, where necessary, to exactly mimic the shape, materials and style of the 1920s ones. Mei has also re-rendered this elevation’s original brut concrete in plaster, and the loading bays have been rebuilt, but this time as balconies for the first-floor tenants. The northerly, riverfront elevation was entirely rebuilt in the 1954 version, and this has been maintained, with the addition of sliding, painted-green doors, just like the original Fenix loading bay doors.

Mei Architects’ reinvention has fully embraced the roughness and texture of the building’s industrial origins. ‘Transformation is what we do,’ says director Robert Winkel, whose key projects include the reinvention of a historic cheese warehouse in Gouda as 52 loft-style apartments, plus refurbishing Gouda’s 1930s swimming pool as community housing. During our press tour of the building, Winkel affectionately strokes the original 1920s concrete, drawing attention to how much rougher and more porous it is than its 1950s counterpart. He talks of the warehouse’s ‘scars’. These are visible, in all their rawness, in the new internal street that runs 40m through the building, linking the waterfront with the residential neighbourhood to the rear of the building. This street is one of the most exciting spaces, best expressing the kinetic intensity of the building’s past and present. Huge glass windows reveal the 12m height and robust materials of the ground-floor circus rehearsal and training spaces on one side, and the ramps and parking bays of the 270-space parking garage on the other. The placement of this concrete canyon through the building also inserts daylight into its core, through sliding glazed doors either side, plus an extensive rooflight sliced out of the structure above. This ‘spaceframe’ steel structure separates the existing warehouse and the apartments, with a floor of 4m-high interiors which have been left open to either residential or office use; a key part of its appeal will be the continuous glazing on to the riverfront. The apartments can be internally configured by residents. Image credit: Ossip Van Duivenbode

Accessed by a secure glass fenced area, a lift and steel staircase connect residents to the car and bike parking below, and apartments above. It is a nice contrast, emerging from these heavy, industrial textures into a courtyard surrounded by light, greenery and transparency. White concrete and metal elements are paired with pale-wood cladding panels along the apartment exteriors; they range from pale to warmer tones as they rise. Integral whitepainted metal planters on each gallery level are filled with vines, which will soon be creeping across this shared space. There is an ingenious rainwater collection programme that gathers rain off the roof and funnels it into each planter via the slender, connecting white tubes. A low-maintenance planting scheme has been embedded across the communal courtyard.

Shared living is what this scheme is all about, says Winkel. ‘People have come here because they want to be part of a community. When you make a special building with a special place in history, it’s a certain kind of people who want to live there. They have a certain mindset. There are lots of different types and lots of set-ups, whether family or solo. But arranging the apartments around a central gallery is not such a popular typology elsewhere. It’s very popular here.’ Each apartment enjoys some private outdoor space and a balcony, some overlooking the harbour. Image credit: Ossip Van Duivenbode

The apartments vary from 40 to 300 sq m. The first three layers of apartments consist of 80 rental units with limited variation. But the privately owned layers above have been organised around load-bearing concrete columns rather than walls, enabling a far greater choice than is usual. Says Winkel: ‘The existing structure defines the dimensions of the grid — 40 sq m, 60 sq m or 80 sq m — but people can choose how they configure that grid. And people were really glad to have that freedom. Every apartment has to be designed and made differently.’

The prices started out at the upper end of affordable, for Rotterdam — one 120 sq m apartment we look round is estimated by Winkel to have sold at €360,000 (£306,800) prior to completion; it is worth twice that now, he reckons. Ceiling heights are 2.7m throughout, and 3m for penthouse apartments, and each apartment enjoys some private outdoor space and a balcony. Mei’s services were appointed for 50 of the 132 loft-style tenants for interior design, while other tenants chose separate firms for the work.

Judging by the handful of apartments opened for press viewing, the interiors lend themselves to all manner of styles — from gothic sea-cave complete with kitchen aquarium to minimally furnished, contemporary art haven. And judging by the response at the building’s opening — plus the 2019 Rotterdam Architecture Prize the project was awarded in December — residents of Fenix I are surely proud that they are buying into a piece of history, while playing a vital part in the area’s future.