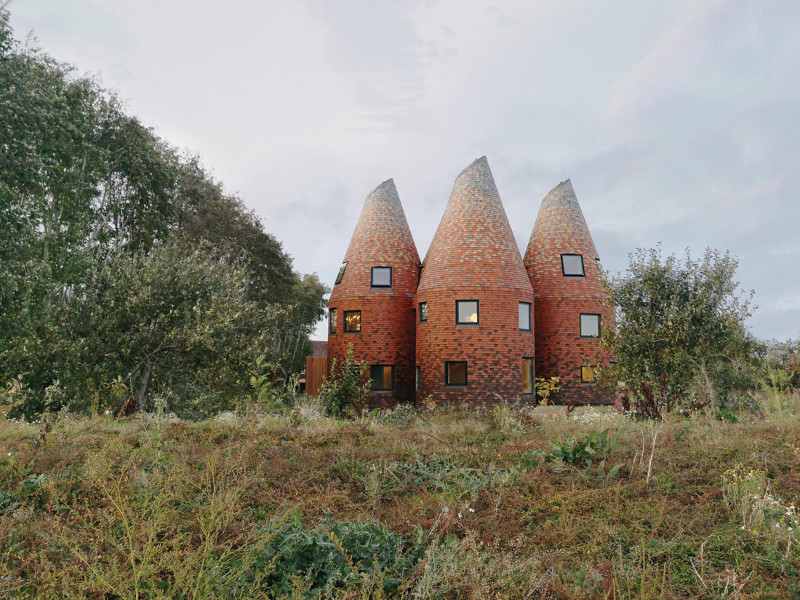 In Kent, ACME has created an inventive, spacious and contemporary home inspired by the iconic local vernacular of oast houses

When ancient typologies are reworked for modern purposes, there is always a huge risk that the resulting structure will veer towards pastiche, compromising functional intelligence or beauty for the sake of superficial imitation. But that is, thankfully, not true of Bumpers Oast — a remarkable 230 sq m residence of clustered towers in Kent, inspired by the county’s historic, turreted hop-drying barns. It proves what is possible with the combined passions and vision of the right architects and clients.

The five towers’ sleek, curved contours are of the local vernacular, and yet not; oast houses traditionally combine square brick structures with shingle-clad towers. This house is all towers, and they are entirely clad in richly hued, randomly patterned clay tiles, which glow against the wintry green fields and apple orchards with an almost hyperreal presence. The towers’ voluptuous forms combined with this continuous material give them a strong, sculptural quality. There is also something about the depth of colour and sheen of the tiles, or perhaps the pixellated prettiness of their quasi-random arrangement, that renders the structure almost domestically decorative — like an overscaled household object has landed in someone’s garden. But the interiors are something else: a sequence of organically contoured, beautifully crafted, pale and daylit contemporary caves. The owners, Sarah and Paul Newton, bought the land this modern oast home now sits on — eight miles south of Maidstone — 15 years ago, with a plan to build a house for themselves and their young family. Paul, who is a planning consultant, felt he could handle whatever the local planning restrictions threw at them. And yet a planning application for the first scheme — a sprawling but otherwise unremarkable family home designed by a local architect — was immediately rejected, because of its scale and the area’s Green Belt designation. Having worked with ACME as planning consultant on a Southampton project, Paul asked director Friedrich Ludewig for some suggestions. Ludewig happily obliged, with three: a low-level house with a turf roof, half buried in the landscape; a modest but distinctive contemporary family home; and the cluster of oast house towers that we see today. ‘The oast house was by far the most visible,’ says Ludewig, but as it was smaller in scale than the rejected proposal, and had clear contextual references, he thought it might win favour with the planning department. He was wrong. It took the Newtons’ calm, strategic campaigning among the local community and the planning officers — and their growing passion to see this quirky home realised — to get it through planning at the second attempt. Ludewig, who grew up in Germany, has always wondered at the oddness of the oast house typology. These cone-topped agricultural buildings, which proliferated in the hop-growing regions of the UK from the 16th century onwards, appear nowhere else in Europe. More efficient ways of preserving hops emerged in the 19th century, but they were saved from extinction thanks to a widespread fad for converting them into quirky homes.

ACME spent a great deal of time delving into the oast house’s origins. ‘The original oast house was a very simple agricultural typology: a brick barn with shingle roofs, designed from the inside out,’ says Ludewig. But there is nothing particularly special about the barn element; the charm is all in the towers. ‘So we thought it would be nice to have the towers in clusters. But then how do you connect them, because they tend to be built as individual structures?’ Placing a fifth tower at the heart of the cluster as a triple-height central space unlocked that problem, creating an open core which connects the surrounding towers’ ground and first floors. Then there was the dialogue between these towers and their setting. ‘It’s a very binary relationship to the outside,’ he says. ‘With a tower, you are either inside or outside.’ The solution was ‘to pull them apart slightly, have them not quite touching’. This allows for two tall windows and glazed front and back doors to be inserted where the central tower and its counterparts separate, providing views and access to the surrounding greenery.

Perhaps the biggest challenge, however, was transforming the tower cluster into a family dwelling, one that offers the warmth, welcome and transparency we now expect of a contemporary home; that took some serious spatial planning. But in this they have been entirely successful: stepping straight from the front door into the central core, which serves as a dining and gathering space, you have a spare bedroom and bathroom occupying the tower immediately to the right, a lounge in the base of the next tower, the kitchen taking up the third, and a utility room and office the fourth. To the right of the front door, the hand-built, wooden staircase rises gently to the gallery-style first-floor landing, which first opens on to an additional sitting room, and then on to three surprisingly spacious split-level bedrooms. Sleeping platforms for the two kids are accessed via a helical staircase made of curving plywood, placed by the entrance to each tower. For the kids’ rooms, the underside of the platform is turned into a study or den, with an adjacent en-suite bathroom. The master bedroom tower has a dressing area in the upper space with its own en-suite.

These cones are a delight. They are clad in overlapping wood shingles that draw the eye up to the slanted oval windows at the top of each tower. The opening Velux windows were chosen for durability, price and efficiency: operated by remote control, along with the house’s other windows, they can all be closed simultaneously as the Newtons leave the house; rain sensors trigger closure if anyone forgets. Three deep windows are placed around each bedroom cone, at varying heights, framing views on to farmland and the adjacent playing fields. The children's bedrooms are accessed via a helical staircase made of curving plywood. Image credit: Jim Stephenson

The staggered arrangement of windows throughout is one of the distinctive features of the house — there is, after all, no precedent for oast house windows; traditionally, they had none. So their placement is more about framing vistas. While the irregular size and spacing is odd, the depth of their setting and the elegant curve of the window reveal somehow seal their appeal — though project architect Lucy Moroney mentions putting a rectilinear window into a concave structure was ‘quite a challenge’.

The structure is timber frame, with a steel reinforcing element where the roundels end and the cones begin (this could have been done with timber, says Ludewig, but local builders wanted to play it safe). The cones were manufactured offsite then craned into position. The house is built on a concrete raft, with a polished concrete floor warmed by underfloor heating, powered via a ground source heat sink in the garden. This heating runs throughout the ground and first floor, but isn’t required in the bedrooms, whose conical forms draw the heat up from the lower floors, keeping them cosy year-round; on a hot summer’s day, simply opening a door and one of the cone’s top windows draws enough fresh air in to rapidly ventilate the entire structure. Velux windows at the top of the towers are operated by remote control, and thanks to sensors automatically close if it starts to rain. Image credit: Jim Stephenson

The interior walls of the roundels are plywood, skimmed with plaster, creating a continuous surface across the first two floors and reinforcing the sculptural qualities of the internal spaces. Finding craftsmen with the skills for curving cabinetry was, thankfully, no problem, due to the popularity of oast house conversions in Kent. That experience with oasts was a particular advantage when it came to placing 41,000 individual tiles around the exterior.

The tiles are in six shades, mostly inspired by the patination of ageing brick, and favouring darkest red at the base, moving to orange at the centre and blue as the cones head skywards. Moroney says: ‘There was a pattern for the roundels, but from the eaves up, we relied on a master tiler, who was about 75, and had a lot of experience with oasts. He had to choose each individually shaped tile, with the only proviso that there should be no row of just one colour.’ Everything could have unravelled over the lead flashing around the windows, but an octogenarian lead worker was found, who managed each awkward junction swiftly and smoothly. ‘All the craftsmen were amazing,’ says Moloney. ‘They were willing to go along with these crazy details. We found really good joiners, which was vital because we wanted to use timber throughout the house.’ Having spent every penny of their budget — and more — on constructing, finishing and furnishing the house, the landscaping has been put on hold. However, a low, grassy mound or ‘bund’ shields the house both visually and acoustically from the nearby sports field, and will be planted with wild flowers in the coming spring. Old apple trees line the boundary of the garden, their gnarly trunks and branches thrusting upwards, like clenched fists.

It has been a long haul, from initial drawings in 2012, to being fully installed in their passion project, but Sarah Newton only has praise for the architects and craftsmen who helped them realise it. One of the nicest details, she says, is the perceptual shift between exterior and interior: ‘It looks so big and imposing on the outside, but when you come inside it’s so cosy. We feel so at home here, we hardly go out.’