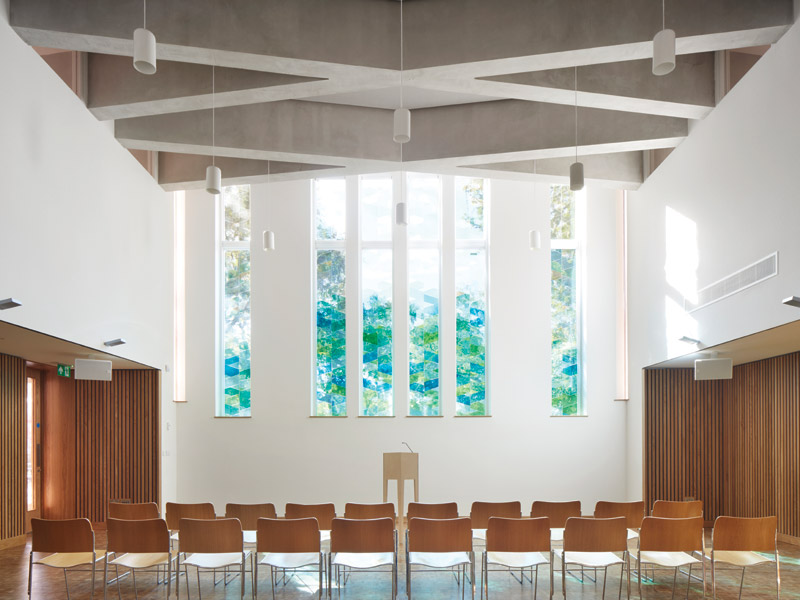 In east London, the rebuild of a community church space has seen 14 new flats created above, all with a generosity of light, space and amenities

Getting the right mix of commercial and community takes a lot of effort. Some housing developments link up with libraries (like Studio Egret West’s The Library Building in Clapham). In London’s East End, they’ve turned to God. A post-war concrete block housing the Bethnal Green Mission Church has been razed and replaced by Gatti Routh Rhodes Architects’ £7.2m house of worship, complete with community facilities including a cafe, a vicarage and 14 flats.

It’s a partnership between the Bethnal Green Mission Church and Thornsett, which specialises in such schemes. Since the mid-Eighties, the developer has been teaming up with churches as well as hospitals, housing associations, local government, livery companies, charities and private landowners ‘to realise the potential of their property assets’, says Thornsett director Bernadette Cunningham. The Bethnal Green Mission Church has a brand new space of worship, above which are arranged 14 flats, all designed by Gatti Routh Rhodes Architects. Image Credit: Jack Hobhouse

Thornsett is currently constructing 177 residential units and three new churches. One high-profile scheme is Hackney Gardens at Hackney Central, where the restoration of the St John at Hackney church — from architectural designer John Pawson — is due to complete in May 2019. As Cunningham explains, it’s about hard-nosed economics as much as altruism. At Bethnal Green, she says, ‘we are hinging the community space off the private residential sales (Brexit permitting).’

The initial intention was to refurbish the existing building — which was originally a medical mission for the new NHS — and improve its poor access. ‘But it was going to cost a fortune, and it still wouldn’t have been fit for purpose,’ says Cunningham. She met Richard Gatti, co-founder of Gatti Routh Rhodes Architects, when they were serving on a housing association board together. ‘We split the building in half,’ Gatti explains, referring to the fact there are three floors of community facilities, with residential above. The firm’s initial design was a storey taller. ‘The project was more comfortable financially when it had an additional floor, but Tower Hamlets council said no,’ says Cunningham.

It was Gatti’s idea to turn the double-height church space around to face the tatty, neglected — but Grade II-listed — Paradise Park next door, ‘to bring the light directly into the church,’ he says. While the room’s stained glass window, designed by Coralie Bickford-Smith, drinks in light from the park, its entrance is situated on the busy and noisy Cambridge Heath Road. These bronze gates give on to The Beehive cafe on the left — the interiors of which were worked on by designer Sara Brockett — and the church ahead, as well as the lower-ground community facilities. There’s a separate entrance next door for the flats, including the four-bedroom, 130 sq m vicarage. It’s an unusual move to have the vicar’s residence on site, as typically, it’s located in a separate building near the church.

The private sale flats are called the Macpherson Apartments, after Annie Macpherson, a contemporary and friend of Dr Thomas Barnardo who founded the church and charity 152 years ago. There are 10 two-bedroom units of 65 to 70 sq m, and four one-bedroom units of 45 sq m. They all have large inset balconies, intended as loggias or outdoor rooms. The architect has framed these with the precast concrete fins of the facade, and lined them with bronze coloured aluminium panels and grey composite decking. A dual-aspect kitchen-living-dining space in one of the apartments. Image Credit: Jack Hobhouse

The interiors have concrete-coloured porcelain tiles in the communal areas, bathrooms, corridors and kitchen-living-dining spaces. All apartments have dual-aspect rooms, and some are triple aspect. All the floor-to-ceiling windows are double- or triple-glazed, depending on their aspect, and all have high-performing acoustic trickle ventilation above each window. That should help block out the noise from the street at the front, and from the string of bars and restaurants that have moved into the railway arches at the rear of the building in the last five years. Not to mention the trains going along those tracks.

The first and second storeys are constructed of concrete, and above that, it’s cross-laminated timber (CLT) panels. The architect says they selected these for their environmental performance, the efficiency and speed of build, and their ability to meet the stringent height restrictions imposed in planning. The CLT is clad in precast concrete panels and site-laid brickwork. The interiors of The Beehive cafe were designed by Sara Brockett. Image Credit: Jack Hobhouse

Standing in the centre of the Bethnal Green Gardens Conservation Area, Bethnal Green Mission Church is in good company. Diagonally opposite on Cambridge Heath Road is the 1851 V&A Museum of Childhood, whose £13.5m renovation and extension by De Matos Ryan is due to open in 2022. Meanwhile, down the road is St John at Bethnal Green, designed by Sir John Soane, and the Grade II-listed 1920s York Hall, a famous boxing venue.

‘We are surrounded by listed buildings,’ says Gatti, ‘so the building had to sit well with the listed neighbours.’ Its exterior has a regular concrete grid, with brick infill panels arranged in a raking monk bond. ‘This pattern is inspired by a series of bold diagonal ribs that form the ceiling of the double-height church space, which are themselves references to the cross vaulting in traditional churches but reinterpreted to form a contemporary aesthetic,’ Gatti adds. For inspiration, he, Routh and Rhodes looked to Louis Kahn, and in particular the triangular grid ceiling of his 1953 Yale University Art Gallery. Because the practice was building on the entire footprint, the adjacent Paradise Gardens were used as a building site. Since then, the area of the park near the church has been replanted and spruced up. Now, the five-year-old practice has more work with the diocese of Southwark, and is designing more houses (though not of God) in London and Suffolk.