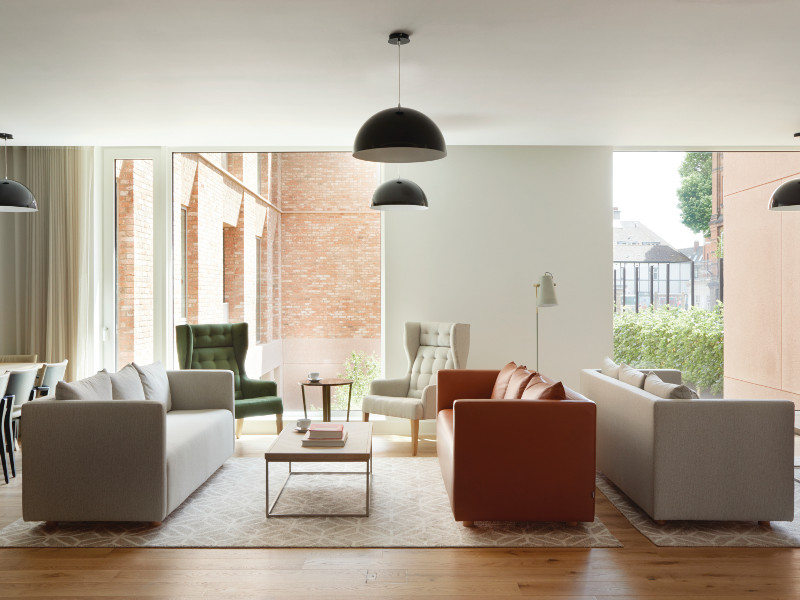 Morris+Company delivers a bold and innovative urban block of apartments aimed at enriching the social, cultural and physical prospects of the over-65s who choose to live here

To be assessing a residential London block for the over-65s on its architectural merits and enlightened programming is something that would have been inconceivable five years ago, given the dire nature of what the UK saw fit to serve up as ‘retirement living’.

But what Belle Vue — a new, 5,700 sq m complex of 59 one- and two-bedroomed ‘later life’ apartments — does, is actually exceed the provision you would expect, in the spatial and sculptural qualities of its architecture, its materials, and the generous internal dimensions; not just for older residents, but for the bulk of commercial developments, bar the super-luxurious. And that’s thanks to the ambition of Morris+Company, its architect and the client PegasusLife, which launched out of Pegasus Homes back in 2013 with a vision to apply aspirational contemporary design to the ‘third age’ sector. The external envelope of warm red, Belgian brick was used to be in sympathy with the russet tones of the nearby red-brick Victorian buildings. Image credit: Jack Hobhouse

To this end, PegasusLife hired a roster of really good, mostly young or emerging architecture practices who had no previous experience in this sector, in order to ensure a fresh approach. Belle Vue was one of the first schemes to be commissioned and succeeds in its aims, as founding partner Joe Morris says, to be: ‘A city-specific housing scheme for third-age living, which fuses contemporary attitudes to care for ageing with a bold and dense architecture.’

One of PegasusLife’s smartest moves was to understand that people don’t necessarily want to decamp to the countryside when they finally have ample leisure to enjoy the cultural delights of the city — at least, those who are fortunate enough to enjoy a decent retirement income. But to attract the kind of affluent downsizers to whom this new breed of apartment is intended to appeal, you have to offer premium locations. Each apartment is at least dual aspect, with those on the upper floors enjoying views of the London skyline
Image credit: Jack Hobhouse

Securing a construction site in Belsize Park, walking distance from Hampstead Village — one of London’s most desirable neighbourhoods — was quite a coup, though the site is a difficult one: steeply sloping and flanked to the east and north, respectively, by the multistorey concrete cliff face of the Royal Free Hospital and its nascent Hopkins Cancer Centre next door (currently a huge construction site), and to the south and west by a large, red-brick Victorian school, mansion blocks and shops. Yet, despite the 10-storey height of Belle Vue’s tallest block, from the street approach you would barely know it was there but for an interesting, textured red-brick tower just visible over the school’s roof.

There were multiple other constraints, as Morris explains: ‘The site is wrapped by six separate conservation areas, each with their own grain, texture and sense of place.’ However, the area including and around the Royal Free Hospital had no such listing or conservation area status. This gave the practice an opportunity to experiment, eventually settling on a ‘plan form of four interconnected blocks which could easily be manipulated through extrusion and at varying heights,’ as Morris says — a multilevel design he has aptly described as a ‘graphic equalizer’. And clearly a huge amount of tweaking and reconfigurations of levels both vertical and horizontal has been undertaken with each block in order to intensify the sense of internal and external connection while mediating light and privacy issues. This juggling of sensitivities to its immediate neighbours while ensuring privacy for its residents has resulted in some of the most interesting aspects of the scheme, including the careful positioning of windows and balconies to create really impressive levels of porosity and daylight. Each apartment is at least dual aspect, with views on to landscaped shared courtyards and roof terraces as well as over the immediate Belsize Park neighbourhood and — for those above the third or fourth floor — the London skyline.

Every one of these flats, which range from 54 sq m to 129 sq m, connects with its site and community. Even those which, on the lower floors, face directly on to the nearby hospital, achieve a feeling of calm, lightness and greenery. This is thanks in part to the placement of windows so as to frame the many mature trees around the site, and also thanks to the apartments’ prevailing flavour of both seclusion and openness which the depth of the windows as well as the loggia recesses conjure. There is still (for now) one huge advantage to this kind of later-life housing, which Morris+Company exploited: a lack of prescribed space standards. ‘This project is designed beyond London Plan space standards in all aspects,’ Morris says. ‘Instead of defining spatial layouts through the lens of minimum means, this project worked plan configurations which followed a number of simple structured rules about flexibility, the entrance sequence, views and so forth.

The homes are designed with efficiency and compactness in parts — for example, how bathrooms hug the inner walls of the units creating a support zone of wet spaces and ancillary functions — and comfort and expansiveness in other parts, such as how bedrooms and living rooms hug large inset loggia which offer multiple views, or plans which have undefined room functions, in particular to the upper floors, allowing interpretation and flex.’

Morris+Company was keen for Belle Vue to evoke a clear sense of place. To this end, the external envelope of warm red, Belgian brick is in sympathy with the russet tones of the nearby Victorian school and tenements. There is a pleasing modulation of treatments across the exterior, which also evokes that 19th-century culture of craftsmanship. The bricks are laid at 10-degree angles at the lower levels to capture shadow patterns as the sun moves across the facade. At mid-height — just where the building becomes visible over the adjacent rooftops — chamfered brick lintels appear at each window and balcony, also typical of the surrounding conservation area. At the upper levels, the bricks are whitewashed and set within a light cream mortar, casting a pinkish tone to the top floors. That same pinkish texture appears in the precast concrete, embedded with pink granite, that wraps around the ground floor of the entrance and interior courtyard, giving a civic, unified feel to this rather complex structural cluster. Morris is particularly pleased with the central courtyard, which he calls: ‘A hidden London space of luminosity and calm. It is where all aspects of the project come together, and a space in which place is achieved.’

A sense of community was equally vital, and although it is too early to say how well that has been delivered (the building is still largely unoccupied), the quality and quantity of shared facilities (939 sq m of communal space) bodes well. There is a whole wellness suite in the lower-ground floor, comprising a decent-sized gym, yoga room, a lap pool that looks on to the shared courtyard, and sauna, steam and treatment rooms and a salon. It feels somewhat like an urban spa or boutique hotel, an atmosphere underpinned by a soft soundtrack of mellow muzak that filters throughout the two luxuriously appointed lounges, a small library and a public-facing, street-level cafe and restaurant with outdoor terrace. No comfort has been overlooked, from the guest suite for family and friends, to the separate dining room that can be hired for private gatherings. There is also an underground car park with enough space for all residents. An encounter with the manager, Robert, sheds some light on PegasusLife’s thinking. He says: ‘It’s a bit like a private members club — but you live there.’ With 30% of the apartments already sold — most of them off plan — I ask what the buyers, whose average age he estimates at 77, are responding to, in particular. ‘They are looking for independent living in a community,’ he says, ‘though if they want to go and lock their door and not talk to anyone for a couple of days that’s fine. The 24-hour concierge service is there to meet all requirements.’ And indeed, the apartments are more than spacious and comfortable enough for people to cocoon for a while. But the key thing is that they have multiple options for socialising, not just with their fellow residents. ‘By having a cafe that is open to the public they’ll get to see new faces as well,’ Robert says. Interestingly, most of the buyers have come from the immediate neighbourhood, releasing large family properties on to the market (another good thing for London).

With its variegated towers, connective courtyards and terraces, and sociable spaces, there is one other residential scheme in London that springs to mind. Morris admits the Barbican Centre was a strong inspiration, wanting to emulate its ‘sculptural tectonics’ — he describes Belle Vue as a ‘muscular, upward-thrusting building’ — but also in meeting the tenants’ aspirations. He says: ‘The target is mid-to-late-60s super urbanites… They are still culturally very mobile, going to events and exhibitions and theatre. It’s about creating a much more urbane outlook on life.’

Age was not really a factor, beyond issues of access, he says: ‘Our view is that the human condition will find joy in spatial and material richness regardless of age. The project could easily evolve into an inclusive and open programme where the wider community and residents could interact more fully.’ Now that would truly be a turnaround: accommodation designed for later life, but so appealing that all generations might want to occupy it.