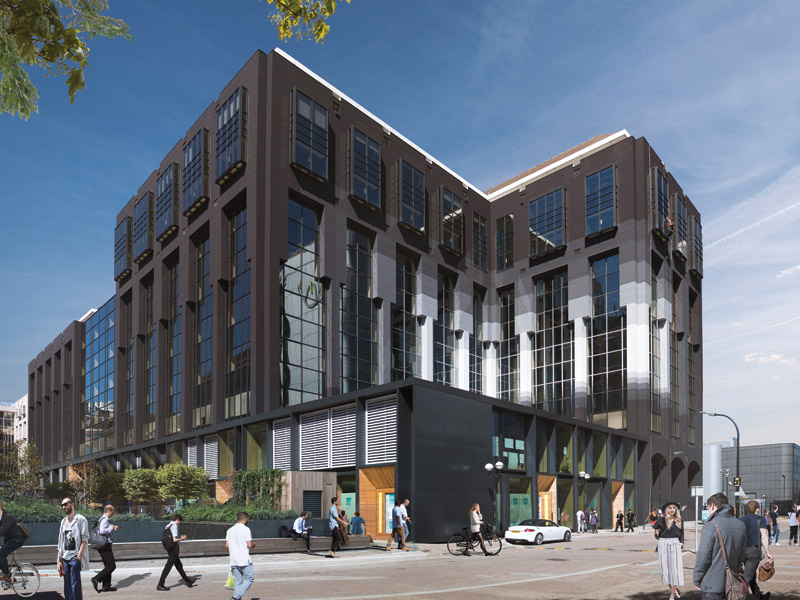 Studio RHE is busy turning an unlovely complex of Nineties offices in east London into a modern, open and social co-working campus

Go out east on London’s DLR, skirting past the Isle of Dogs and towards London City Airport, and you will see a large complex of blocky, unremarkable, postmodern buildings — all muted classical references and glossy, beige stone cladding. Sited across the road from its ill-fated neighbour, Robin Hood Gardens, and squeezed between three busy A-roads, the Blackwall Tunnel and the East India DLR station, the complex was built in 1992 as a business park, designed by Swedish architect Sten Samuelson with Beaton Thomas Architects. Since then it has functioned as an odd home to private businesses — including some empty, eerie disaster recovery offices for banks — and Tower Hamlets council, which still uses part of the site as its HQ.

The developer Trilogy Real Estate bought the site in 2015, and soon appointed Studio RHE. The practice has since been creatively transforming two of the complex’s main buildings — now known as the Import Building and Export Building — into Republic, a campus of offices and co-working spaces fit for the 21st century (and largely filled by millennial, creative-industry types). ‘We’re repurposing for how people want to work now,’ comments Studio RHE founder Richard Hywel Evans as we walk around the Import Building, which completed in October. The Export Building is due to open this summer and the goal is to develop the remaining buildings on site to complete the Republic campus over the next four years, totalling upon completion 60,400 sq m of workspace.

The complex before transformation

Republic is aimed at those creative professionals priced out of more central areas of London — Hywel Evans enthuses that occupational costs at Republic are coming in at half the current average in Shoreditch, where other similar businesses and workspaces are based. Out of the 20,440 sq m of workspace in the Import Building, 4,645 sq m is classed as truly affordable.

The complex’s original architecture is not exactly the type of pomo currently enjoying a revival — so why retain and adapt rather than rebuild anew? ‘A new-build takes much longer,’ explains Hywel Evans. ‘They’re far riskier post-Brexit. That’s not to say adaption projects are simpler — you still have to make it a serious programme, repackage it and make it modern.’ And this is just what the practice has done.

The Import Building has been given a whole new appearance thanks to the painting of the building’s exterior in matt black, with op-art flourishes by graphic designer Scott King. There is a new funnel-shaped, timber-clad entrance, along with a two-storey, timber, steel and glass pavilion extending the building at the ground floor. This pavilion, which wraps round the building’s base, increases its permeability and active frontage, with cafes and shops leading out on to a totally transformed public realm in what was once a dry dock and bus turning circle. Now, the outdoor space boasts planted waterways, timber decking and pavilions, waterfalls, lighting and seating. There are plans to turn a 100m-long dock along the site’s northern edge into a triathlon pool for tenants, heated using the heat waste from a neighbouring building’s air conditioning.

Inside, a whole new CLT and glulam structure has been inserted

Inside the Import Building, the 10-storey atrium is articulated with a statement turquoise staircase, and a newly inserted, grid-like structure of chunky, exposed CLT and glulam beams. ‘We stripped everything back as far as possible and inserted a new internal structure,’ explains Hywel Evans. Every floor engages with this space, including through terraces and balconies formed by the timber structure.

In the Export Building, there is a similar approach to the contemporary workplace, and another two-storey pavilion around the base. Design details differ, however — notably the atrium, which will be defined by continuous balustrades on each floor, rather than an inserted wooden frame. As we walk around the pavilion extension under construction, Hywel Evans revels in the relationship between the exposed concrete of the original structure and the raw CLT and glulam beams of the new extension. How these materials — and the approaches they represent — integrate is vital to Studio RHE’s vision: taking the old and making it work for today.