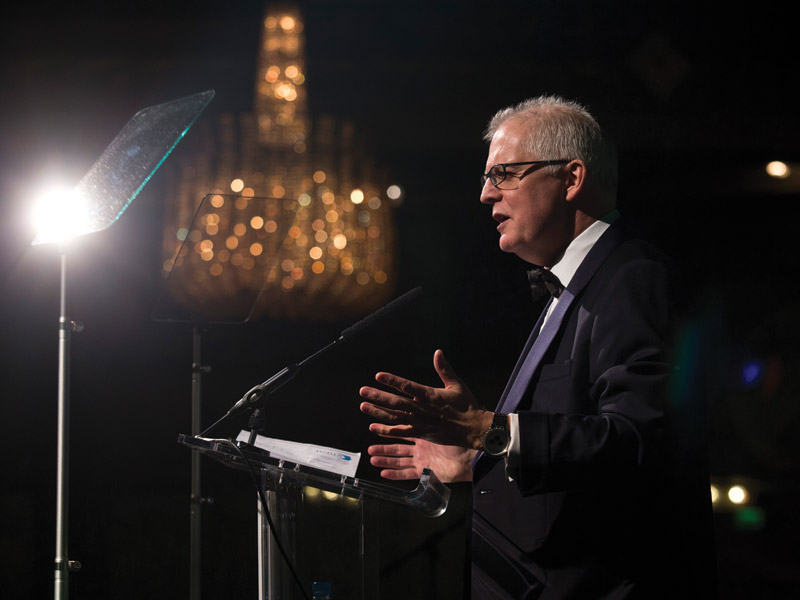 Meet Ken Shuttleworth, this year’s recipient of the FX Award for Outstanding Lifetime Contribution to Design

The 19th annual FX awards party was brought to a close last month when comedian and compere, Jimmy Carr, announced world renowned architect and designer Ken Shuttleworth as the winner of the Outstanding Lifetime Contribution to Design award. This highly prestigious award, the recipient of which is voted for by FX readers, was presented to Shuttleworth honouring his 40 years of outstanding service to the industry.

Since starting out at Foster + Partners in 1974, Shuttleworth has become one of the world’s leading architects through his work on some of the most iconic architectural landmarks in the world. A handful of these prominent developments from his early career are visible in London. These include the Millennium Bridge, City Hall, the Wembley Stadium arch, and of course 30 St Mary Axe, aka the Gherkin. Before he began his own practice, Make Architects, Shuttleworth had made his mark abroad contributing to similarly distinct buildings.

These notably include Hong Kong’s Chek Lap Kok airport and the Commerzbank in Frankfurt. In 2004, he founded Make Architects, a 100 per-cent employee-owned practice that quickly gained a reputation for challenging conventions. Having cemented Make as an important architectural agency in the UK, Shuttleworth once again set his sights on the rest of the world. In 2009, Make established a reputation in Asia, opening a studio in Beijing and an office in Hong Kong, through which the company counts an impressive 23-storey residential tower in Kowloon alongside three other schemes in its portfolio. In 2013, Shuttleworth set up a practice office in Sydney, which is currently working on the development of one of Sydney’s busiest transport hubs, known as the Wynyard Place scheme.

His achievements are numerous: a CABE commissioner for nine years, he is currently President of the British Council for Offices, a Fellow of the Royal Society of Arts, and a member of the UK Government Advisory Group on Professional and Business Services. On top of these he has received honorary doctorates from three universities and was awarded an Honorary Fellowship of the Royal Incorporation of Architects in Scotland.

Shuttleworth regularly contributes to industry magazines and lectures at architecture schools in the UK and abroad. In addition, he leads his Future Spaces Foundation, established in 2013 with an aim of pioneering smart design that permits strong communities and first-class living and work spaces.