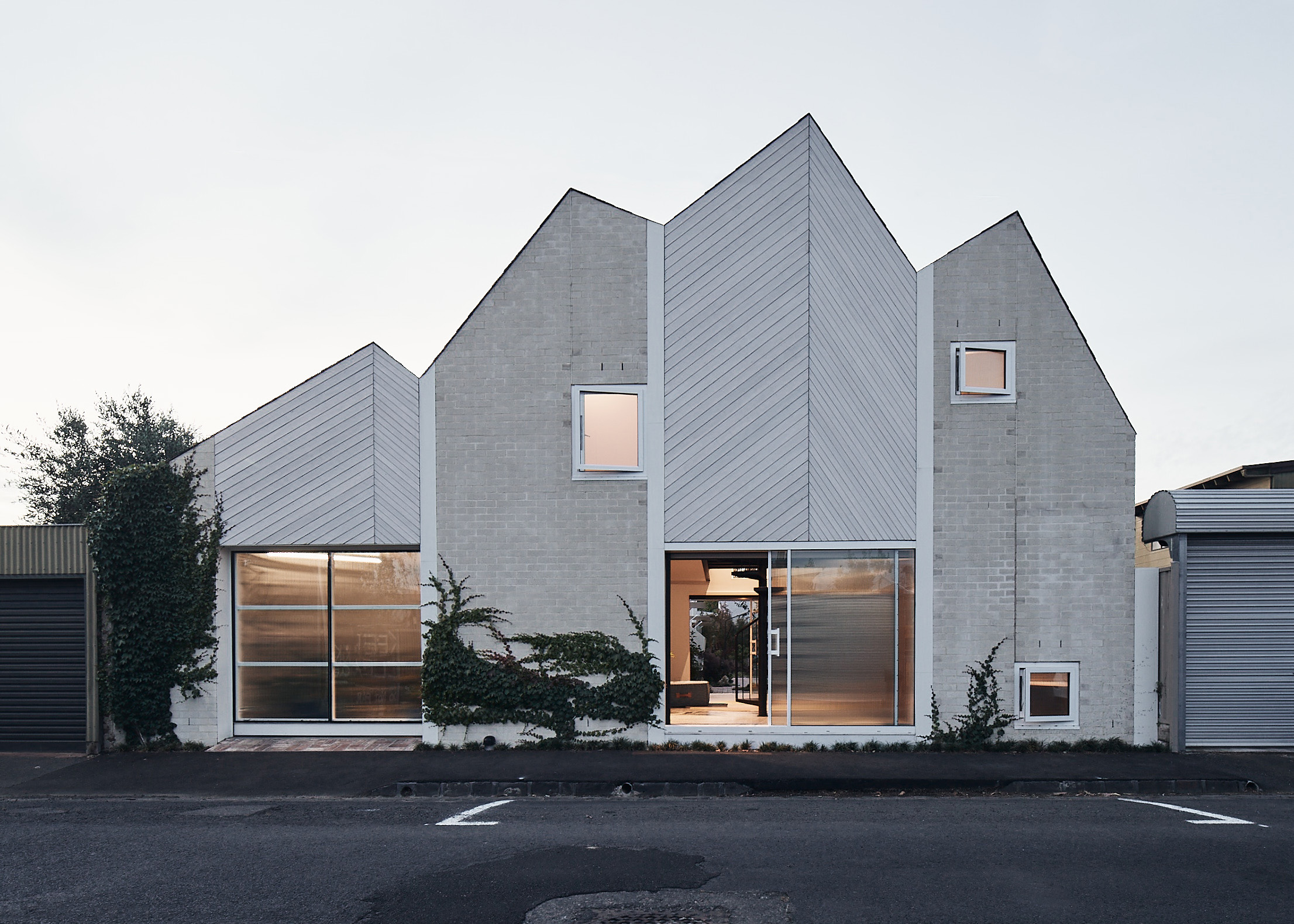 A home expansion project in Melbourne turned into something altogether more adventurous and surprising. Largely hidden behind a cottage-lined street, RaeRae House draws you into a whole new world

At times, it can feel as if Melbourne is a city of cottages. A large proportion of its inner suburbs — the neighbourhoods surrounding the downtown — is characterised by rows of single-storey cottages of the late 19th and early 20th centuries. Most of them have picturesque porches with filigree ironwork. They create a pervasive, low-rise, heritage-led aesthetic of Melbourne’s built environment, at first glance belying the fact this is one of the world’s major cities, thriving with contemporary culture.

But Melbourne knows well the appeal this historic character brings to neighbourhoods, their residents, and their visitors. Local municipalities make it difficult for planning applications to go through which disrupt the historic street frontages of these cottages. And so, although many Melburnians desire homes larger than what the average cottage might provide, to remain in these neighbourhoods and simultaneously expand requires some inventive design decisions and careful planning negotiations.

This has certainly been done at RaeRae House, a family home in the hipster-friendly North Fitzroy area, by local firm Austin Maynard Architects. But the AUD$1.9m (£938,800) project somehow goes beyond clever little solutions and manages to genuinely surprise and delight, leading the owners (and visitors) into a largely hidden world off street that feels as if the architect has been given free rein — even though the result absolutely revolved around numerous site restrictions.

The owners, Fiona and Tim, started with 450 Rae Street, a quaint, Victorian cottage on a quiet road full of them. As they were planning to sensitively expand the house to grow their family, the next-door cottage, 452 Rae Street — separated from 450 by a slim passageway and fence — came up for sale. Sensing an opportunity, they bought it, despite its state of disrepair at the time. The local municipality, the City of Yarra, instructed that 452 would need to be restored or rebuilt anew in exactly the same style, so then the question was how to turn these neighbouring cottages into a single home that was something altogether bolder and more suitable for contemporary family life. The answer lay in the space behind the houses — a 344 sq m plot that had simply been dedicated to backyard and garage uses. Having seen and loved the work of Austin Maynard, the owners brought the practice on board in 2014 with the broad brief of: create more space, a dedicated wing for three children and a garden.

The two original cottages — which have been turned into an en-suite guest bedroom (450 Rae Street) and modern study with internal ‘shed’ (452 Rae Street, fully repaired) — are now joined together by a subtle entrance in the space between them. The only signifier on this street frontage that something is afoot is a crisp circular opening cut into the wall of 452, piquing interest and drawing your eye between the cottages to a paved and planted passageway. The set-back entrance then leads into a new, open-plan building that extends the full length of both plots, including a 125 sq m garden, a living-kitchen-dining space, an upstairs master bedroom, a garage and a whole three-bedroom wing for the children with its own play room and work area.

Upon entering, you encounter a bright, glazed passageway surrounded by greenery which takes you from the ‘old’ — the historic cottages — to the new. This sets the tone for the rest of the newbuild: an abundance of natural light, constant views on to the garden, and free-flowing spaces. There is also a stripped-back yet playful palette of materials including ground-down concrete slab flooring creating a monochrome terrazzo, spotted gum-clad cabinetry and black perforated steel detailing for stairs and balconies.

The seemingly free-flowing spaces are also flexible, however; a series of sliding doors and panels is neatly hidden throughout the house that enable sections and rooms to be closed off whenever desired or necessary. ‘Alone, together is our thing — where you can choose your level of engagement,’ says Maynard as we walk around. Without these sliding doors, there are some stark lack of boundaries — for instance, the master bedroom overlooks, mezzanine-like, the kitchen-dining area.

But they also create some fun surprises; what you think is the mirrored backsplash of the kitchen worktop actually slides away to reveal a secret room behind — a long, thin pantry. All this craftily disguised storage of course enables the key rooms of the house to remain clutter-free — as far as possible, given family life — but also echoes the whole premise of the house, an architectural surprise hidden behind a frontage of cottages. One other design approach enables separate spaces whilst retaining the sense of a single, open-plan interior. Austin Maynard has designed some auxillary ground-floor rooms as almost box-like insertions into the house, clad in the spotted gum and set 0.9m below the ceilings of their respective locations — a laundry within the kitchen-dining space, a bathroom within the guest bedroom and the shed within the study. These create playful opportunities: an integrated ladder frame enables kids to climb on top of the shed ‘box’; ventilation pipes rising between the ensuite bathroom and the roof, visible within the bedroom, are bright yellow.

A key feature that shapes the experience of the interior, and indeed the whole project, was born out of creative responses to planning restrictions: an irregular, zigzag roofline. Appearing as a series of steeply pitched roofs, it rises to peaks where two stories were deemed acceptable and descends at sharp angles to satisfy neighbouring daylight requirements. With a few extra zigs and zags thrown in, too: ‘It had to have some theatre,’ explains Maynard.

Externally, this roofline gives a dynamic graphic appearance to the project, enhanced by the contrast between the black slate roof tiles and the pale facade which alternates between ivory-hued brick and white-stained, V-jointed silvertop ash timber laid in diagonals. Internally, the zigzag roofline shapes zones in the home. In the living space, the sharp peaks and troughs demarcate a space for a TV and for a fireplace. Upstairs, they determine where the master bedroom meets the bathroom.

The kids’ area of the home, at the eastern end of the site, can be closed off from the rest of the house and accessed directly off a completely different street, Moss Street, enabling — it’s hoped — greater independence as the children grow older, while still remaining part of the family home. In this wing, a live/play space is animated by a spiral staircase leading up to a landing off which is accessed three bedrooms and a bathroom.

The stair and landing are made of black perforated steel set between two exposed structural steel beams; standing on the landing you can look down through the perforations in the floor into the living space below. What’s more, the landing opens up with a balcony to a double-height space uniting downstairs and upstairs — another example of the continuous spatial flow that Austin Maynard has ensured throughout.

Downstairs in the kids’ wing, sliding doors from the live/play zone lead on to a sunken, long, thin room for work and making. Just as the hidden pantry — and a walk-in wardrobe off the master bedroom set above the pantry space – conceals the adults’ mess, so this sunken workroom of similar dimensions conceals the children’s mess.

Out on the Moss Street frontage of this eastern end of the house, Austin Maynard has created ‘moments of generosity’, says Maynard, for a street that is largely dominated by garages and backs of houses. A slim strip of planting separates the house edge from the pavement; ivy grows across the facade; the house’s garage door is made from reeded glass, appearing more like a large window than unsightly shutter.

The embrace of planting on this facade reflects a commitment to greenery throughout. A number of sliding glazed doors in the house lead out on to the garden, which is planted with silver birch and Japanese maple. A reading nook in the kitchen-dining space looks out through a large window to the garden too. Meanwhile, two, small, vitrine-like enclosed gardens at each end of the living-kitchen-dining room both bring additional daylight into the home and create an enhanced engagement with nature and greenery. ‘A lot of our work relies on the gardens,’ says Maynard. ‘For us, the garden has the same level of importance as the rest of the house.’

Pico by Ronan and Erwan Bouroullec for Mutina