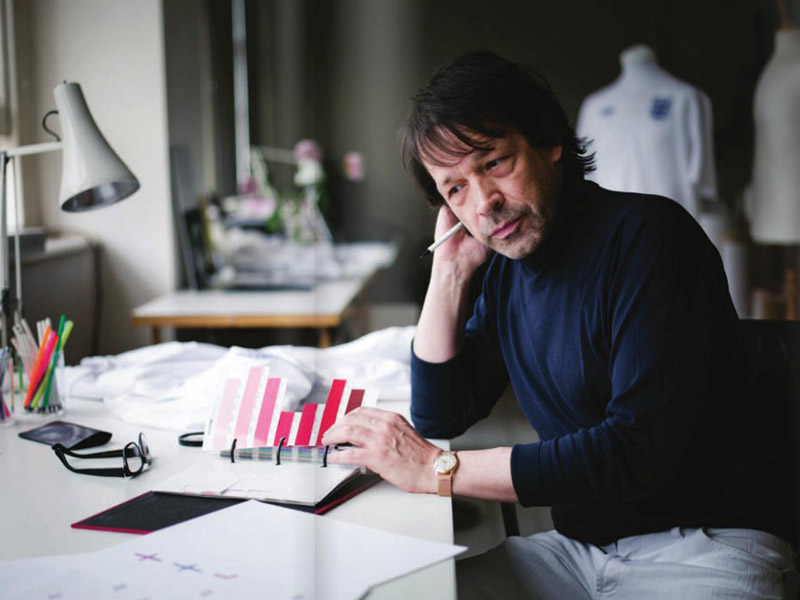 I wanted to be a car designer. I was seduced by the way a pencil line on paper could be transformed by subtle mastery into a beautiful piece of sculpture in the hands of someone like Marcello Gandini, for example, who designed the Lamborghini Miura. I remember speaking about it to my art teacher at school, Mr Burton, who was very encouraging, but who warned me away from being, as he described it, a small cog in a large machine, designing the same car part for years on end. In the same conversation he said, looking at my tectonic style of drawing and painting, why not consider a career in architecture, where every project is different and effectively a prototype?

I think a major pivotal moment in architecture was when Frank Lloyd Wright became more experimental, having completed his apprenticeship in the late 19th century and begun undertaking his own work. He simplified architectural geometry and promoted a new horizontality, pushing the structural limits of spans and cantilevers and reducing the ornamentation that had previously been the defining face of architecture. After imitation and development, this effectively gave rise to the international style and then the early modernism that still dominates today.

The radical thinkers or influencers that made early impressions certainly weren’t all from architecture, though most were in the arts. As a teenager, I was struck by the discipline of Rodney Mullen in the mastery of the art glibly termed ‘skateboarding’. In design, I was drawn to the analytical purity of Marc Newson and the graphics of Peter Saville. In cinema, it was Stanley Kubrick, who I thought had the same approach to composition and clarity as Mies van der Rohe in architecture. These highly self-controlled artists were tempered by more maverick characters, like modern-day Fagin Malcolm McClaren, whose influence, together with Vivienne Westwood, spanned everything from fashion and retail to music. Tomlinson considered following in the footsteps of the likes of Marcello Gandini, who designed the Lamborghini Miura

Right now, I still think a lot about the handdrawn rendering of the late Lebbeus Woods and the ‘machine architecture’ of Neil Denari, both of whom I was lucky enough to interact with as visiting professors at my school of architecture. I’m currently also inspired by the work of Elon Musk. I love the idea of an electric car builder, who is influencing and progressing the whole area of fossil fuel-free car design, but who also designs and builds rockets and aspires to live on Mars.

I think we all could and should learn from – and look to learn from – anything, anywhere, right across the spectrum from the arts to the sciences and politics. We’re always working within some kind of context and we should always know what that context is.

Anything that pulls away at the obstacles and layers that lie between pure thought and final physical expression. Indubitably technology, but it could just as easily be a serendipitous adoption from another industry sphere as something built-for-purpose. Gehry, for example, advanced his method of working and his ability to design radical structures thanks to CATIA, a software tool originally developed by an aerospace manufacturer. This interview with Peter Saville and his definition of ‘interzone’ in particular: ‘…the space between design, art, fashion, music, movies, photography, architecture, interior … it’s what people talk about now as convergence. And that was what interested me … the leading edge of mass culture, and how new ideas would define themselves in different ways. The feeling of the now is the feeling of the now. Musicians express it one way, film-makers … another way and photographers … yet another way – but it’s all the same spirit.’ (www.oipolloi.com/ blogs/the-blog/interview-peter-saville-1)

Can you name two buildings/pieces of furniture you consider radical designs of their time, or perhaps still to this day?

Frank Gehry’s Guggenheim Bilbao, which gave the city a focus point and singlehandedly made it a desirable destination in northern Spain, plus the Villa Savoye just outside Paris, by Le Corbusier and his cousin Pierre Jeanneret, which refined the principles of modernism in a single and beautiful building. A pen and paper. I need to sketch the main principles of a response to a brief with tangible images, which then go on to form designs.

Just as I’m going off to sleep, which sometimes wakes me right back up again! I’ve been known to pick up my phone and note things down or even email myself before the thoughts are lost.

When travelling. Getting away from the immediate is very conducive to big leaps forward in thinking. Located just outside Paris, the Villa Savoye ‘refined the principles of modernism in a single and beautiful building’. Image Credit: August Fischer

An advance in a current project or anything to do with my family or major world issues.

The desire to progress something. When life’s good, then that forward momentum radiates positive energy in itself. When life’s challenging, then the thought of progress is a beacon that might help everything else too.

Against, which feels like a positive in the moment, but it does make life more difficult. There is so much less resistance in doing what’s expected and maintaining the status quo. Thinking against is like pushing a rock up a hill, but whilst you may fail spectacularly, you might just also do something extraordinary.

To be honest, I can’t imagine doing anything other than being an architect, but if that really hadn’t been possible, then definitely something else visual because my dyslexia probably shut off quite a few other paths. Otherwise, that addiction to a sense of progress might have led to politics.