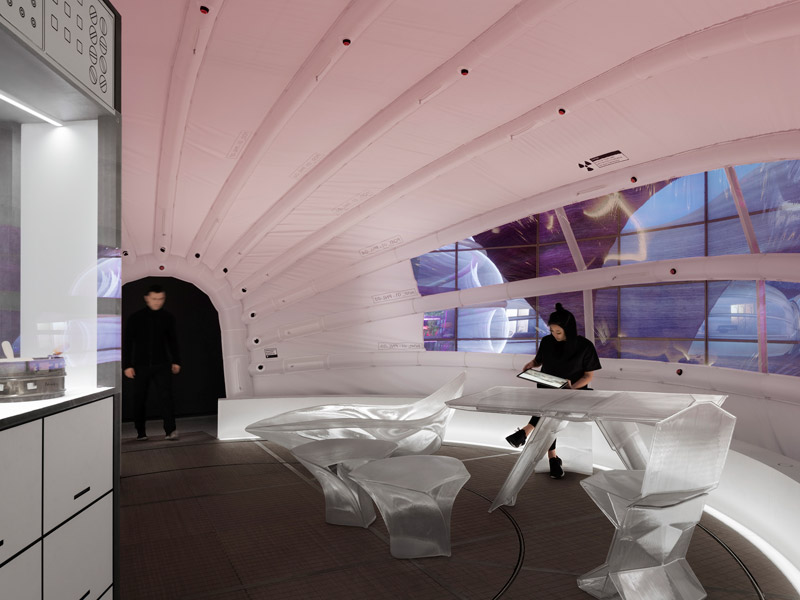 Xavier de Kestelier, head of design at Hassell, talks about the radical thought that has sparked his creativity

Top Image: Image Credit: Naaro. De Kestelier was behind the concept for a ‘home’ on Mars – part of NASA’s 3D Printed Habitat Challenge.

I think the moment that I was handed my first construction set, my future career was defined. As a child I was obsessed with creating and building. I loved technical toys, like the German engineering set Fischertechnik and Lego Technic, and I still do. My favourite construction set of the mid-1980s was definitely Lego Space, which fuelled my two favourite things: building and space.

As I never really thought that designing spaceships was actually a job, I settled for becoming an architect. Only years later I found a way to marry my two passions and now I have my dream career, designing Mars and Moon habitats for NASA and ESA.

I would have to say that the most radical period of design in architecture was the 1960s. It was a time when society underwent radical change – culturally, socially and politically. Architecture could suddenly be about a lot more than just buildings. Architects and practices such as Archigram and Cedric Price were at the forefront of this.

I was fortunate enough to study under the tutorage of architects from that generation while studying at The Bartlett under Colin Fournier and Peter Cook, the frontman of Archigram.

There were transformational advances in technology in the 1960s. Many of today’s innovations in design technology have their origins in that time. The first CAD program was a parametric 3D modeller and was invented in 1963 by Ivan Sutherland. It was the same Ivan Sutherland who only a few years later invented the Sword of Damocles, which was the first VR system. AI also has its golden age in the 1960s. Marvin Minsky, the leading AI computer scientist, proclaimed in 1970 that it would only take a few years before we would have a machine with the general intelligence of an average human being. Now, 50 years later, we are still not quite there yet.

In the early 2000s I joined the Specialist Modelling Group, the R&D department from Foster+Partners. The purpose of the group was to help the practice to design and build their most complex buildings (e.g GLA, British Museum, Swiss Re and NBK).

The SMG was founded by Hugh Whitehead, who became my mentor for the next decade. Hugh was one of the first pioneers to apply parametric design on large architectural projects. Although Hugh was known for his virtuoso skills in parametric design and computer modelling, he was first and foremost a great architect. It is this balance between great design and technical knowledge I still strive for till this day.

Any individual that strives to transform their industry. Take, for example, the way Elon Musk is changing the space industry and drastically lowering the cost of entering orbit by developing reusable rockets. The way he has done this is turning the usual process on its head, by failing early, failing fast and failing often through a process of continuously developing prototypes and flying and testing these as fast as possible.

Elon’s engineering process draws parallels to the ways in which industrial designers or architects design. Just as with Tesla, Elon Musk has integrated SpaceX vertically. The designers and the engineers work in the same location where rockets are being fabricated, making the whole development agile and fast.

Over the last couple of decades, architects have seen their responsibilities taken over by an ever growing army of consultants and project managers. I feel architects are losing their ability to drive the design through strong concepts and ideas.

I am always impressed by the ways in which film directors are able to deliver a particular vision or narrative. Just like architects, they also need to manage a vast amount of individuals and experts within the creative process. I was really blown away with the Stanley Kubrick exhibition curated at the Design Museum in London. Stanley Kubrick’s attention to detail and drive to bring his vision for 2001: A Space Odyssey to fruition was nothing short of inspiring. 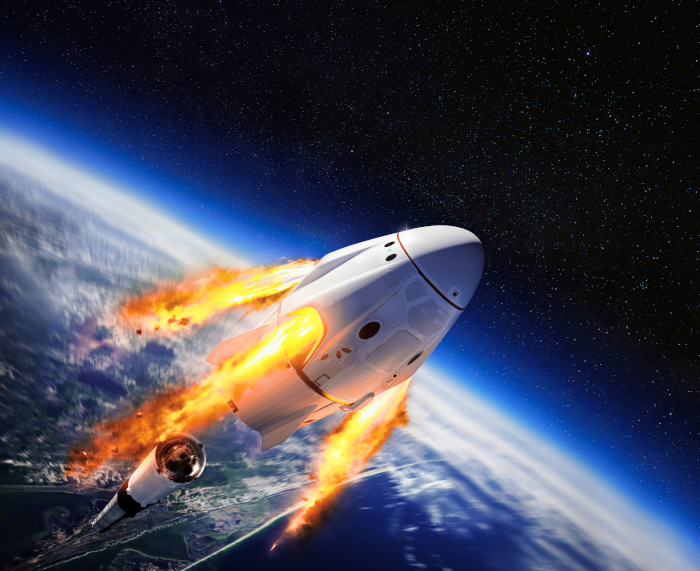 Kestelier is inspired by the way Elon Musk and SpaceX are transforming the engineering process. Image Credit: EVGENIYQW / SHUTTERSTOCK.COM

To create real innovation in architecture, we first need to create the right environment. Our industry has a fragmented procurement process, due to the traditional tender processes. During the design phase, architects have little to no connection with the contractor or fabricators. Standard procurement processes create a disconnect between designer and fabricator. That connection is technically possible as both the design process (e.g BIM or computational design) and the fabrication processes (e.g. five axis milling or waterjet cutting) have been digitised. The digital world has made the connection between design and making easier than ever. Unfortunately, antiquated procurement is restricting the collaboration between fabricators and designers. I would argue that we need to return to the model of the master builder of the renaissance, but now in an open source and collaborative digital world.

It would probably be a rare and hard to find book from 1995: An Evolutionary Architecture by John Frazer. In the 1960s Frazer was one of the first to use computers in architectural design. Instead of seeing the computer as a way to replace drafting tables with desktop computers, he set out to completely replace the designer themselves. The tools he developed were not designed to help the architect, the computation and digital tools were the architecture. The book illustrates some of John Frazer’s earlier work and the work of the students from the Diploma Unit II, which he led at the Architectural Association in the 1990s.

This book became my source of inspiration while studying at The Bartlett and sparked my initial interests in computational design.

Could you name two buildings/ pieces of furniture that you consider radical designs of their time, or perhaps still to this day?

I would choose two projects from the late 1960s. The first project would be Centre Pompidou by Rogers and Piano. They designed a building that was designed inside out and placed it in the middle of the historical Beaubourg in Paris! Walking around it a couple of years ago, I was still amazed by the fact that this piece of radical architecture was built in the middle of a classic Parisian neighbourhood. 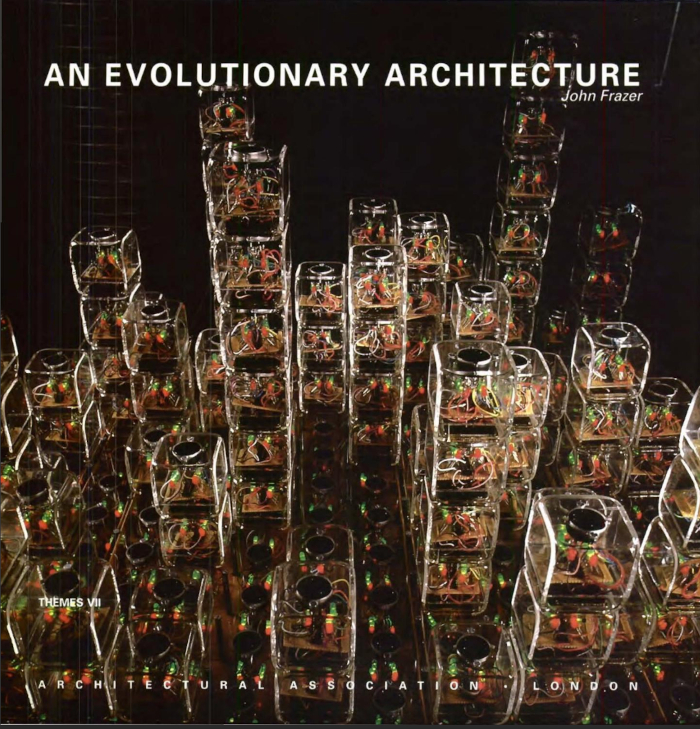 An Evolutionary Architecture by John Frazer, one of the first architects to use computers in his design process

The second one is a small conceptual project by David Green from Archigram: LogPlug&Rokplug. The project imagines natural objects such as a rock or a log that house embedded services. These are services such as data, power and water, anything a modern human might need to live off ‘the land’.

I think best with … (e.g. my hands/a pencil/ with a computer)

Talking and sketching with my team. My drawing skills aren’t great, so I need to talk while I sketch.

I think best … (e.g. first thing in the morning/ last thing at night)

Late at night when the children have gone to bed and the house is quiet.

I do stand-up paddle boarding through the many inner-city London canals and rivers. Those long paddles are a great way to clear my mind, get focussed and think clearly without the usual distractions.

I am a very deep sleeper, so few things keep me awake! However, one of my concerns for humankind is the climate emergency, and in particular how much architecture and construction accounts for 40% of carbon emissions. In our industry I see a lot of greenwashing but not enough action; as an industry we have a responsibility to address this.

Collaborating with people from other discipline - scientists, engineers, fashion designers, programmers, artists, fabricators. Anybody I can learn from.

I like a good argument, so I’ll always start with against.

I like to be creative within technically constrained environments: designing yachts, space habitats, etc. So one science I’ve always been really fascinated by is theoretical physics. It seems to be a field that is extremely technical but requires loads of imagination and creativity. Unfortunately I am far from clever enough to go anywhere near it!

SpaceX Spaceship SN10 doing a vertical landing. The footage looked like it was straight out of a sci-fi movie!