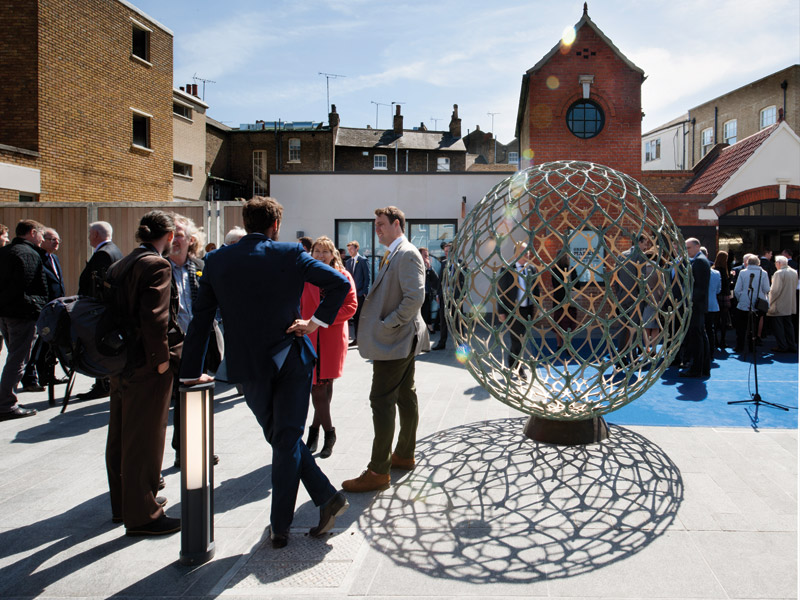 InspIred by the mind-boggling tessellations of MC Escher, the landscaping for the New Ludgate development in the City of London enhances a new alleyway and a tiny piazzetta linking the Old Bailey with Limeburner Lane. The 7,000 sq m project arose as part of Fletcher Priest Architects’ masterplan for the redevelopment of the New Ludgate site in collaboration with Sauerbruch Hutton. As well as two new commercial buildings, the project incorporates a new east-west pedestrian route that recalls the many medieval thoroughfares once common to the area, but increasingly under threat through the development of large floorplate buildings. Gustafson Porter designed a geometric paving pattern that gradually transitions from the York stone of the Old Bailey pavement into dark granite as it progresses into the alleyway in an inverse of colour. Two textured clusters of pavers mark the mid-point. Created from a set of nine repeatable pavers, these were also inspired by the work of fashion designer Alexander McQueen.

At the small piazzetta at the Old Bailey end, the pavers lead pedestrians to a focal point of a tulip tree surrounded by integrated granite seating. Particularly effective from above, the pattern resembles a scattering of leaves that gently disperses at the ends of the alley. In addition to the square and alley, Gustafson Porter also designed a south-facing roof terrace at fifth-floor level.

According to partner Donncha O Shea, ‘Both spaces seek to normalise the hectic energy of central London, and embody a belief that a small-scale space with high-quality materials and refined detailing can enhance the public realm, thus creating an intimate space within the heart of the city that everybody can use.’

Designed by Grimshaw, with Arcadis and WSP | Parsons Brinckerhoff, the concourse will surely be much appreciated by long-suffering users of the station, who have endured decades of substandard infrastructure followed by several years of disruption, while the much-needed redevelopment to increase rail capacity has taken place. According to Grimshaw partner Mark Middleton, one of the key benefits of the scheme will be increased pedestrian connectivity through the station from Tooley Street to St Thomas Street, with the covered space terminating in new public realm at either end.

In this way, the closed ‘citadel’ nature of the station is broken down and the site made more permeable, with through routes such as Stainer Street accessible 24 hours a day.

The grand new concourse itself stretches beneath all the platforms, supplemented by a new, smaller upper concourse adjacent to The Shard. Disembarking passengers on through platforms travel down from the platforms via escalators in the middle of the redesigned platforms to the new street-level concourse, with shops, seating and circulation space.

From here, passengers can either change platform, head for the underground, or exit at street level.

Grimshaw’s aim was to create a bright and airy concourse, bringing natural light in from the platform level above. As well as north light, the windows have been positioned to allow some south light in to create shards of light. In terms of finish, the practice prioritised the use of robust, self-finish materials that acquire a patina with age. These include – unusually for such spaces – timber struts of Western red cedar, used at upper levels and alongside the escalators. Use of wood, says Middleton, gives a handcrafted feel to the space as well as assisting in acoustic attenuation. ‘It has a warmth to it, and has a very human quality,’ he says. ‘We wanted to make the station a joy to go to rather than a chore.’

The concourse incorporates two areas of retail, including the Western Arcade. Here Grimshaw took inspiration from the Victorian brick arches that extend along one third of the site and created concrete versions to extend the arcade, which links the rail and Underground stations.

There is still some way to go before the new concourse can be appreciated in its full glory, with works not due to complete until January 2018. By then, the station will be able to accommodate an increase in passenger numbers of 65 per cent.

Browsing the packed Greenwich Market each weekend, it’s hard to believe that only a few years ago this historic covered craft market was under threat from redevelopment plans that included a luxury hotel and new retail designed by Hopkins.

Greenwich has seen a lot of change lately, but these bold plans drew huge local opposition, and despite being approved at a public inquiry were eventually abandoned. Enter architecture practice Barr Gazetas, enlisted to find a new way to improve the market while retaining its much cherished character. This was no small task, involving three rounds of consultations with dozens of stakeholders including 380 traders concerned with everything from the cobbles to toilets. The task was all the more challenging – and rewarding – given the area’s World Heritage Site status. At the same time, roof ventilation has been improved. Better access has been achieved by replacing some of the cobbles – which weren’t historic – with granite paving, but otherwise not much has obviously changed in the main market, which is a relief after the prospect of a far more invasive redevelopment.

Carefully phased programming enabled the market to keep going throughout the refurbishment, enabling it to retain most of its regular storeholders, and with them its essential spirit. This is definitely a case of gentle enhancement rather than transformation. ‘Markets are about density and atmosphere and working together,’ says project director Jon Eaglesham. ‘Our designs are focused on enhancing and rejuvenating the much-loved market.

The bigger change has been outside the main covered market, with the addition of a new public space beneath an elegant canopy, where visitors can sit to eat food from the stalls. Hidden services enable the new public space to function as an events area also when required.

This has been built on an idle service yard off Durnford Street, which has been re-established as the pedestrian route into the market. A former banana warehouse has been refurbished to provide new retail units. ‘It was nice to balance the restoration heritage project with some contemporary design,’ says Eaglesham. Market visitors might not even notice other key changes, including new storage and amenity facilities for stallholders, but for the traders they are a huge improvement. This reflects, Eaglesham's (site owner Greenwich Hospital) commitment to investing in the historic market’s future rather than prioritising a more short-term return on its investments.