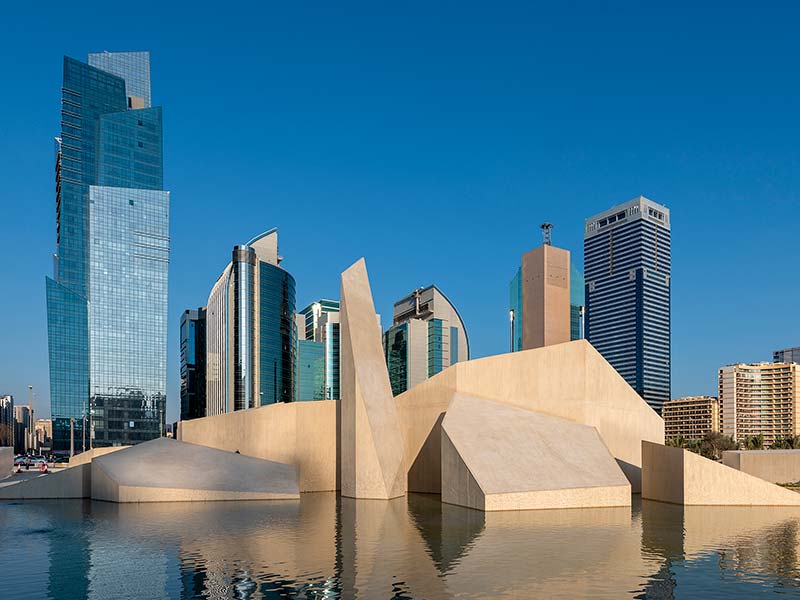 Whether as a feature to be embraced or a threat to be avoided, water adds to the interest of a project. Kay Hill looks at three examples.

When water is involved in any project – whether as a feature to be embraced or a threat to be avoided – it adds to the interest. Here’s a close-up look at three examples:

In a desert climate where water is a scarce and vital resource, it inevitably has a special power and beauty. CEBRA, the Danish and UAE-based architect responsible for the masterplan of the Qasr Al Hosn Fort in Abu Dhabi, has used it to functional, aesthetic and spiritual effect in the design for the complex’s 1,100 sq m prayer hall. Water is already an important part of Muslim spiritual life – before every act of prayer ablutions are performed in running water, and few mosques are without a public fountain – but at Qasr Al Hosn it has been elevated to an intrinsic part of the overall design, helping to create a sense of calm to those who visit.

The new facilities are part of the redevelopment of the whole 140,000 sq m Qasr Al Hosn site into a cultural park that will represent the city’s historic heritage alongside its modern vibrancy. The contemporary prayer hall (a worship space that is smaller than a mosque) sits in the northeastern corner of the site, which is home to the 18th century fort built to protect Abu Dhabi’s only freshwater well – later used as a royal residence and government building – and the Cultural Foundation designed in the 1970s by Walter Gropius’ firm The Architects Collaborative.

From a distance, Al Musallah resembles a stylised version of the kind of rocky outcrop found in desert landscapes. Springing gradually out of the public open space, a series of irregular geometric shapes – inspired by the distinctive mud-crack patterns of the coastal desert landscape and salt flats surrounding Abu Dhabi – rise into small, interconnected buildings that make up the prayer facility. The gleaming white structures seem to grow organically from the clear, reflective water that protects and part-surrounds the building.

Coming from the busy, urban environment, the worshipper can move gently from the secular to the spiritual by passing through passages between the forms, then into the cave-like entrance halls, before moving into the ablution areas and then to the prayer halls. At every stage of the way water is present – forming a natural barrier between the prayer hall and the bustle of the city, flowing through the ablution areas and meandering around the building itself under a series of glass walkways.

Mikkel Frost, CEBRA partner in charge of the project, describes the role of water in the overall design: ‘The two main elements of the site are the fort and the Cultural Foundation. With our design for the masterplan we aimed at maintaining these two buildings as the dominant visual anchors while at the same time emphasising the Musallah’s importance within the cultural park – so the Musallah’s height is deliberately kept below that of the fort.

But by partially placing the building in the water, the reflection visually doubles its size to highlight its position within the masterplan. The water also creates a natural distance between the prayer halls and the public cultural park to ensure privacy for the worshippers without the need of fences or other visually intruding barriers.

‘Furthermore, the water reflects light onto the façades of the geometric volumes, thereby creating an oscillating appearance that indicates a place of worship and illustrates water’s role as cleansing element in the prayer ritual taking place inside the building. This is further accentuated by the experience of passing the glass bridges over the water between the building volumes, moving from the entrance hall through the ablution space and into the prayer hall.’ The water is certainly the biggest attraction for visitors to Lepe Country Park in Hampshire. As one of the few places within the New Forest where it’s possible to access the coast, the glorious views over the Solent towards the Isle of Wight are a huge draw.

Yet when it came to designing the Lepe Lookout visitor centre, the water was also the biggest problem facing the architects in Hampshire County Council’s Property Services department: the new structure was replacing a previous cafe that was flooded in a storm, and the location is frequently lashed by wind and waves and subject to the ever-present threat of rising sea levels. The council’s Countryside Service wanted a new building that would include a restaurant, visitor information point, offices and supporting facilities to cope with half a million visitors each year, while remaining lowkey and in keeping with the natural, undeveloped beauty of the coastline. To give the architects even more of a challenge, the building should be able to withstand all that the weather could throw at it, and rising tide predictions for the next century, without any form of sea defences.

In response to these constraints, the design team decided to elevate the building high above the beach, putting it out reach of even the worst storms and tides, and future-proofing it for a hundred years. Accessed from the beach via steps and a timber boardwalk, the building sits on a reinforced concrete platform that is supported by an arrangement of columns, shear walls and piles. This approach allows tidal surges, the principal threat to seafront buildings in the area, to reclaim the beach without causing damage. External roller shutters protect the building overnight and during storms when sand and stone can be blown in by high winds and tides.

The materials were carefully chosen to withstand the extreme tides and storms and to weather naturally to integrate into the beach-edge environment. The elevated concrete structure echoes those of other seaside structures in the area, and the timber cladding will grey like the timber breakwaters. Left undecorated, the wood was carefully selected to ensure that it would tolerate the coastal environment with little maintenance. The main roof, which is tightly wrapped in zinc, overhangs the building façade and helps protect it from the sun and rain.

The 355 sq m centre cost £1.7m and was awarded the 2019 RIBA South Award. Hampshire County Council’s executive member for recreation and heritage, councillor Seán Woodward, says: ‘We are delighted the Lookout has won numerous industry accolades. Lepe Country Park is much loved by thousands of visitors every year so it is only fitting, as a place of historical importance and coastal beauty, that its visitor facility should have a ground-breaking and innovative design. Our award-winning, in-house Property Services team responded to rising sea levels by designing and creating the restaurant some 2.5m above the beach. In doing so, the Lookout is the first public building of its kind in the area to withstand exposure to the coastal weather while offering amazing panoramic views of the Solent.’ The people of Shyamnagar, in the Satkhira coastal region of Bangladesh, have a difficult relationship with water. There is the ever-present risk of flooding from tidal surges from the Bay of Bengal, combined with torrential monsoon rain that can also cause flash floods. The staple agricultural crop of rice needs large amounts of water to grow, but rising salt levels in the ground and a lack of summer rainfall mean that crops often fail, and many of the area’s 300,000 people, a large portion of whom live below the poverty line, end up struggling to find drinking water from polluted ponds and rivers when the tube wells hit only salty water.

NGO Friendship has been working with vulnerable people there since 2002, providing community development resources including education, economic development and healthcare. Initially, Friendship used a floating hospital and mobile clinics, but now the coastal community is also served by a new 80-bed hospital that conserves and utilises water in a unique and aesthetically beautiful fashion. The land on which the Friendship Hospital stands was donated by a local philanthropist, and the 3,387 sq m building was designed by Kashef Chowdhury/Urbana to include an outpatient department, inpatient beds, operating theatres, consulting rooms and pharmacy. At the centre of the site, dividing it into two parts, is its most striking feature: a canal of water.

In a landscape where water can be both destructive and scarce, it’s a feature that speaks of plenty, inviting those in need of medical attention into an environment that promises refreshment and care. The canal was inspired by the riverine Bengal landscape and provides natural cooling, but is also a practical solution to a two-fold problem. Firstly, it captures and conserves rainfall, storing it in two large tanks at both ends of the canal where it can be used instead of the heavily saline groundwater. Secondly, it is an important aspect to way-finding, clearly separating the busy outpatient department from the quieter in-patient area and providing a natural way of controlling access.

The idea of beauty combined with practicality continues throughout the site – a series of courtyards helps with natural ventilation, keeping the wards cool and comfortable for patients, while the use of robust local brick helps the building to blend in with its surroundings while being much more resilient to monsoons and flooding than more traditional mud or bamboo constructions. The founder and executive director of Friendship, Bangladeshi social entrepreneur Runa Khan, has a saying that she believes captures what the NGO tries to do, and certainly sums up the Friendship Hospital: ‘The poor cannot afford poor solutions.’