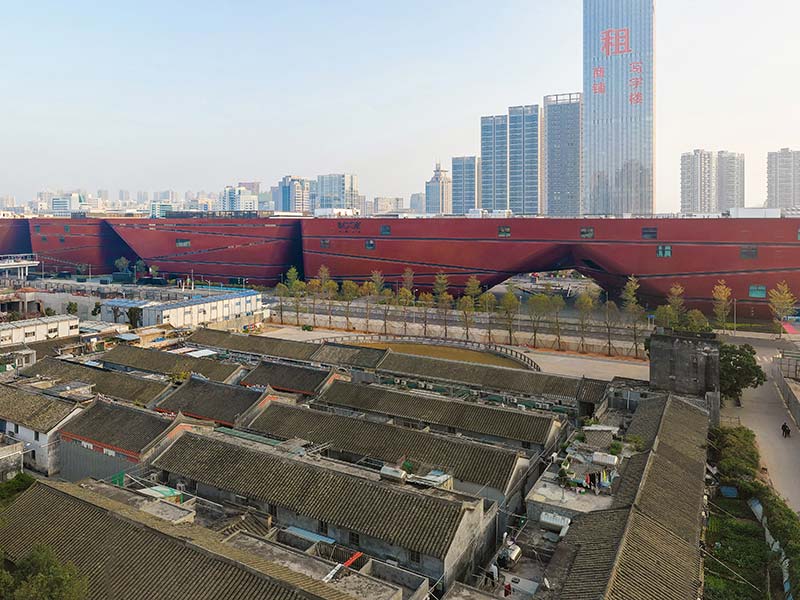 A cultural centre is, in a sense, a snapshot of a nation or people – who they are, where they have come from, and where they see themselves heading. It can be a vast complex or a single building, but it needs to capture in its very foundations a sense of pride and purpose.

When it comes to celebrating culture, it seems there is no shortage of funds available in China. Among many new such projects across the country is Mecanoo’s Longgang Cultural Centre in Shenzhen, which opened last year in the Guangdong Province and is a little more than 100 miles away by road from the He Art Museum.

Looking from overhead, the centre quite literally forms a bridge between old and new – low-rise traditional Chinese houses with tiled roofs are separated from the high-rise brave new world of the special economic area’s city centre by the Longcheng public park and the four vast but separate elements of the 95,000 sq m cultural complex. Mecanoo was awarded first place in an invited design competition to create a centre that would include an art museum, urban planning facility, a book mall (a 25,000 sq m shopping centre that literally sells only books), and sports and leisure facilities for young people. As the name of the park in which it stands translates as ‘dragon square’, many of the entries focused on incorporating the traditional Chinese dragon motif into the design. The Mecanoo team, however, designed to go purely contemporary. ‘We didn’t want that kind of … inspiration, but a more down-to-earth, contextual reference,’ Friso van der Steen, Mecanoo’s technical director, explained at the time. ‘We designed it in a very contemporary way without being too symbolic.’

Rather than restrict access to the park for the city’s 12 million inhabitants, Mecanoo designed the building as four separate but almost touching blocks, one with a huge archway through it, made possible by concrete ‘super cores’. Clad in colourised aluminium, and with every face curved or slanted, the building has no obvious front or back, but instead looks outward in all directions – perhaps the perfect image for a city that stands between China and Hong Kong, and has gone from a fishing village to a metropolis in less than 40 years.

Although its scheduled grand opening in March had to be delayed due to the coronavirus epidemic, Tadao Ando’s 16,000 sq m He Art Museum (HEM) at Shunde, in Guangdong, China, is a perfect example of how the past and present meet to create a harmonious whole. Commissioned as a place to celebrate southern China’s regional Lingnan culture, the design of the building was rooted in local architectural motifs such as central skywells, waterside pavilions and gardens for meditation. Regional civic and religious buildings have long been circular to reflect the idea of a ‘round sky’ found in ancient Chinese cosmology and philosophy, and Ando has kept to that principle is his design. While the building has a traditionally circular shape, it is reinterpreted in a contemporary form, as a series of four stacked, non concentric discs, with a central skywell that floods each floor with natural light. Inside, a double-helix pair of staircases take visitors between the levels. The creation of a glass and steel building that is accessed via a walkway across a lake like Lingnan’s ancient waterside pavilions represents the dynamism of a modern China that still values the heritage of the past. Ando has said of his design: ‘I want to create a museum that can synthesize southern China’s rich diverse cultures that stretch many millennia and the influences that birthed Lingnan architecture. I imagined HEM as an energetic central anchor point to all the artistic and regional custom, climate, landscape and civilisation in Lingnan.’

At MÉCA, the cultural centre in Bordeaux, France, that opened last summer, what happens on the outside of the building is perceived as important as what’s inside, when it comes to capturing the spirit of the area. The 18,000 sq m Maison de l’Économie Créative et de la Culture en Aquitaine, designed by architects BIG and Freaks, contains an auditorium, cinema, contemporary art exhibition and space for a wide variety of other cultural events. But it’s the outside space that really speaks to French life. The 850 sq m public roof terrace is a flexible space where visitors who have paid the token one euro entry fee can enjoy stunning views over the city, while the 1,100 sq m space underneath, dubbed the ‘urban living room’, is a free spot for all to enjoy. ‘Within this new urban room, we have already seen the arrival of the first skateboarders, the first romantic couple sharing a bottle of Bordeaux on the steps, and the first demonstration on the sloping promenade,’ noted Bjarke Ingels, founding partner and creative director of BIG, shortly after the opening. Visitors and locals alike are encouraged to walk through the building via a series of steps and ramps, while the stepped areas on either side of the building were purposely designed to encourage people to just hang out and be part of the artistic vibrancy. ‘The missing pieces are maybe the most interesting parts for the building because this is where all the public events and activities can happen,’ said Ingels.

Rather than choose a typically Finnish design for the new extension to the National Museum of Finland in Helsinki, competition winner JKMM has instead chosen to create a building that’s universal rather than local. The architectural competition was to design an extension that reflected the title of the contest New National – capturing in visual form how the notion of nationhood is understood in today’s Finland. JKMM chose to do that through a building called Atlas, which will contain additional exhibition space, a workshop and a restaurant in a distinctive white, disc-shaped building. The form was chosen because it was so simple, geometric and even primeval in its form, that it would have universal appeal.

JKMM founding partner Samuli Miettinen explains: ‘Our entry, Atlas, reinforces our interest in how architecture can enable a sense of solidarity and belonging to a place. The National Museum is a place that belongs to everyone and anyone in Finland and we thought its extension’s architectural form should be universally understood yet encourage multiple interpretations.’ The 5,000 sq m extension will have a 2,000 tonne cantilevered concrete roof, and will stand in the museum garden like a giant sculpture, with the linking access to the original building and some of the gallery space under the ground. It is named Atlas to reflect the idea of carrying history and culture – like the mythical Greek titan who held up the heavens – but the simplicity of the design shape also says something about the contemplative, thoughtful and stoic nature of the Finnish national identity. The building is expected to be operational by 2025.

For communities that have felt undervalued or have been persecuted, having their own cultural centre can be a source of great civic pride and be a step towards healing old wounds. The Ballardong Nyoongar people of Northam, near Perth in Australia, suffered bloody repression in the mid-19th century, and, thanks to The Aborigines Act of 1905, were segregated and eventually exiled from their traditional land to a native settlement 200km away.

When the laws were repealed in 1954, many families returned to the town, and eventually in 2016 the Shire Council obtained funding to create a new cultural centre that would promote and support the Nyoongar people and educate the world about their unique culture. The architect tasked with creating the 2,300 sq m Bilya Koort Boodja cultural centre building was Iredale Pedersen Hook, which worked together with interpretative designers Thylacine and the Aboriginal community of Northam, to come up with a design brief. The Nyoongar elders were particularly keen that the building should not look like any other building in the town, but should respond to the landscape and reveal it through Ballardong eyes.

The result is a dark, curvaceous building, set on stilts to protect against flooding, and featuring a meandering timber screen made from slats of local recycled Jarrah timber on the side facing the river. The windows and openings represent a ‘cultural compass’ that look across the landscape to towards distant Aboriginal cultural sites, helping visitors to achieve the aim of seeing the landscape through a different lens. At night, the lighting shines through the slats like a welcoming campfire, giving the building the warmth of home for a once displaced community.

The Iranian island of Hormoz is a small salty patch of 16 square miles in the Persian Gulf with beautiful beaches but high unemployment and low aspirations. Most investments in the island, such as the extraction of ochre from its famous red sands, have been seen by local people as ‘taking’ from them, but the Rong Cultural Centre, funded by film producer and patron of the arts Ehsan Rasoulof, was intended to be a home-grown gift to them.

Rong Cultural Center, by Tehran-based ZAV Architects, is small but perfectly formed. Just 300 sq m in size, it was developed in conjunction with local residents and using local materials to create something that would be a boost to the people of Hormoz by providing useful and much needed facilities as well as encouraging tourism to the island. Mohammadreza Ghodousi, founding partner of ZAV, explains the process the project went through: ‘Before offering our own architectural typology for Rong, we decided to have a calculated presence on the island, paying attention to social and environmental sustainability. A temporary community centre was set up to gain the participation of local people, beginning the collaborative process with multi-disciplinary brainstorming workshops where Hormozians and designers could work together towards a future vision for the island.’

With no strong vernacular style of existing building on the island, ZAV Architects looked to the geography and environment for inspiration for the cultural centre. Hormoz is known for its interesting rock formations as well as its colourful sands and soil, and this provided ideas for the form of the centre. ‘To create a space which harmonized with the island, we studied the unique geomorphology of Hormoz and took inspiration from the hills,’ says Ghodousi. To create such a natural form, the team used a rammed earth system, based on the SuperAdobe sandbag construction pioneered by Iranian- American architect Nader Khalili. ‘In this low-tech construction, the people of Hormoz played a serious role, building with their own hands a truly Hormozian building made of Hormoz soil to add to the urban landscape,”’ says Ghodousi. ‘The project captures the landscape in architecture.’

The finished structure has two domes, one at either end, the first containing a cafe and the other a tourist information and bike rental centre. At the rear there is a recycling management area, while the domes are linked by an 80 sq m stepped platform. ‘This platform hosts cultural activities, events and ceremonies that operate as a mediator between locals and tourists,’ the architect explains. ‘It’s a public space that people can walk on.’