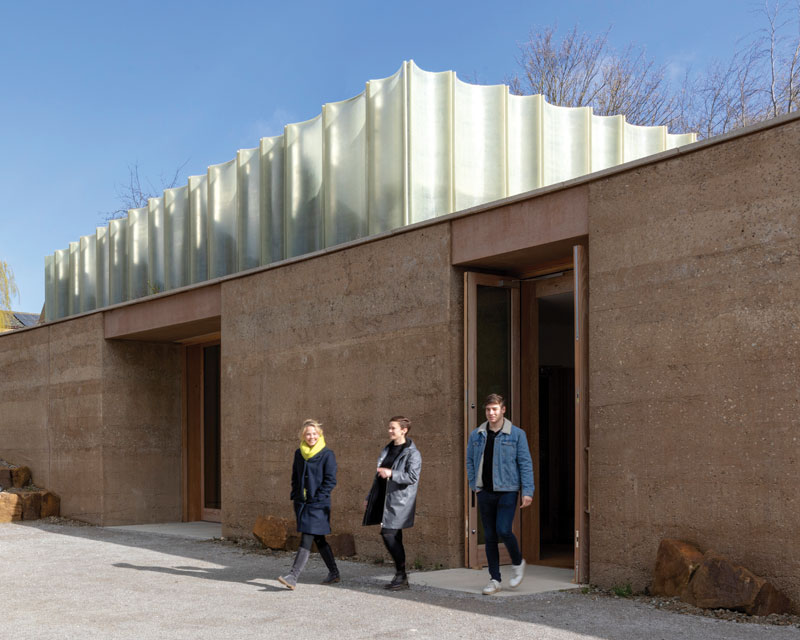 With its new Yorkshire Sculpture Park visitor centre, The Weston, Feilden Fowles has walked the line between raw craft and refinement

That The Weston does not make some grand architectural statement, that it sits subtly in the landscape, that its budget was modest (£3.6m) — these are all in fact elements that make the building so successful. In describing the project, Yorkshire Sculpture Park’s new 673 sq m visitor centre, ‘of the earth’ is a phrase that pops up repeatedly from the architects — Fergus Feilden and Ed Fowles of Feilden Fowles — and it is an apt one. The raw, warm and contextual material palette — drawn largely from a mix of local quarries — grounds the project, quite literally, in its surroundings. Its walls are made of 15 layers of pigmented concrete ‘inspired by the local geology of Yorkshire,’ says Fowles.

What’s more, it is neatly embedded in the landscape, nestled into a hillock left over from when the site itself, on the eastern edge of the 200ha sculpture park established in 1977, was used as a quarry.

The building performs as both a formal and experiential transition from the visitor car park off the M1, into the sculpture park. It’s an inhabited boundary, of two sequential characters. Upon arrival, you are presented with a thick, earthy-toned, low wall — an ‘enigmatic, monolithic block’, says Fowles — but as you descend a gentle slope and step through the entry doors, you are instantly enveloped in a bright, light, pavilion-like space with a fully glazed wall looking out on to the rolling landscape beyond. ‘The idea here is to create a new perspective on the landscape,’ says Yorkshire Sculpture Park (YSP) executive and founding director Peter Murray. ‘You start by creating a silent and solid wall which reflects the local landscape, the millstone grit, the colours of the earth. The whole idea is to suggest there’s something behind it.’

And this interior space behind it — dominated by a 140 sq m cafe-restaurant but also containing an entrance lobby and interpretation corner — is defined by a simple timber frame. This interior feels natural, earthy and warm: the timber structure is pale Douglas fir, the floor a light terrazzo ground back to reveal the aggregate and the ceiling is made of natural wood-wool panels.

In the middle of the room, a wood-burning stove sits with its black chimney rising up through the space — the only dash of dark in an otherwise bright interior, and part of the sustainable heating strategy of the building. In addition to the glazed wall which wraps around the open-plan space, there is a line of skylights bringing daylight down into the heart of the building, which also functions as natural ventilation when needed. It is hard not to feel a peaceful sense of wellbeing in this light-filled space crafted from natural materials — whatever the weather. While the majority of The Weston is made up of this open-plan restaurant and entrance space, ancillary rooms include the kitchen, gender-neutral bathrooms and a shop. Through two sets of double doors leading to the northern end of the 50m-long building, however, is a new 125 sq m gallery space, which complements the range of existing indoor spaces for art across the park (some of which were designed by Feilden Clegg Bradley Studios — so one senses YSP is keeping it in the family).

Here in the gallery, jagged yet gentle rooflights (sharp-peaked with curved undercrofts) bring the same wealth of daylight into the room but in a carefully orchestrated way which ensures ambient dispersion. Outside, these roof lights create a zigzag roofline over the gallery, in contrast to the horizontality of the rest of the building (covered in a wild-flower roof by Jonathan Cook Landscape Architects).

Curiously, this jagged crown is surrounded by sheets of glass-reinforced plastic (GRP) in an engrailed profile, almost like a curtain. This is not intended to hide elements of the building so much as work to create a ‘beacon’, as the architects explain, to announce its presence. It is a visual marker for an otherwise subtle structure which buries itself into the landscape. Close to opaque off-white in daylight, at night this GRP screen becomes translucent, and once illuminated by the gallery lighting below, powerfully depicts the sawtooth silhouette of the roofline. A shame, then, that in the day it can err on the side of looking a little unfinished, as if construction hoardings still need to be removed. Back inside the gallery, the four walls — made from a cast in-situ white pigmented concrete — were envisioned by Feilden Fowles as a ‘stretched canvas’ for the temporary exhibitions that will take place inside. For its inaugural show, The Weston is hosting an interactive and awareness-raising exhibition from artist duo Thukral and Tagra, titled Bread, Circuses & TBD, which uses the practice of ‘kushti’, a traditional form of wrestling in India, to tackle issues around the social, environmental and economic challenges faced by farmers in India and across the world. Once this show closes in September, a new exhibition from London-based sculptural artist Holly Hendry will open.

In order to create stable conditions for the art, Feilden Fowles employed an innovative approach to humidity control, creating a ‘humidity buffer’ of 10,000 unfired clay bricks at the building’s northwestern corner — these absorb moisture from the air at high humidity and release it at low humidity, maintaining optimal internal conditions. Outside, on the western side of the building, inside the park, the surrounding area has been landscaped by Cook using boulders literally excavated from the site during construction, and planted with local species. Here, one notices the gentle concave curve of the building’s western facade, ‘to continue the sweeping line of the quarry’, says Feilden, gesturing towards the topography of the hillock. It also provides a moment to get close to and touch the walls. These many layers of limestone, granite and sandstone have been waterjet-washed to reveal the aggregate. It’s one of the many elements where a sense of raw materiality has been carefully produced. ‘We wanted the whole building to have a balance of craft and refinement,’ says Feilden.

This is a building of careful, thoughtful, contextual details adding up to create an impressive whole, much like the park itself. As I wash my hands in the surprisingly beautiful, skylit bathrooms in The Weston, a local resident looks around and turns to say: ‘Aren’t we lucky to have this on our doorstep?!’ I may live a few hours away, but I wholeheartedly agree.