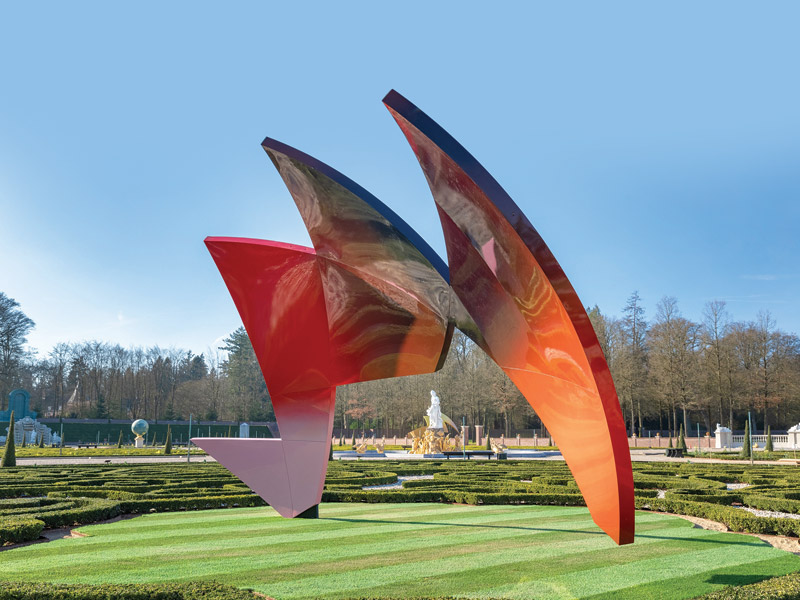 Called The Garden of Earthly Worries, the title as well as the conception harks back to that point in the 1600s when these gardens were first designed; a point when man thought he could order the world according to his own wishes — the ‘Age of Reason’ — and make it a Garden of Earthly Delights. Now we have arrived at the sharp downward end of that trajectory. Libeskind says the idea of the exploded globe came to him instantly, when he first visited the garden and stood at the ultimate lookout point, on the belvedere roof deck that has been added at the top of this ‘modest’ palace, built as a hunting lodge by King Willem III and his English Queen Mary II. The gardens — which were recently restored to their original 17th-century design — are extraordinarily ornate, with flowerbeds laid out in a network of fleur-de-lys patterns, and adorned with statues representing the Greek ‘virtues’, as well as two splendid globe fountains, one Celestial, the other Terrestrial. These were what caught Libeskind’s eye, as he explained at the opening in March: ‘Instantly, as I stood on the roof and admired the symmetry of the globes, I thought of the asymmetry today of our relationship to the planet and the fact that the words “nature” and “culture” don’t have meaning anymore because nature is a cultural production and culture is part of what we used to call nature. I had what I call a eureka moment.’ However, it’s not the first time Libeskind has used the motif of an exploded globe; famously, his design for the Imperial War Museum North in Manchester originated in a globe split into three (Earth Shard, Water Shard and Air Shard); so not a particularly original proposal, but certainly appropriate.

It is no easy thing to visualise and represent elements such as gases, which are not in themselves a threat except to the point where we have now manipulated them. It’s for that reason, he says, that he has placed their colouring at the garish end of the spectrum, and positioned them somewhat off-balance, to conjure a sense of tension and movement. He sees these sculptures as ‘more like intruders, or even ghosts… They will be seen in different ways depending on the angle, the light and sun. They speak about a new era in which we have the power and the reason and the ability to do something but we have to be aware of where we are. So rather than being in a sentimentally beautiful part of the past, we are in a garden of the present, and the future is up to us.’

Libeskind’s sculptures are not permanent, though they will animate the garden — and a whole education programme devised around them — for three years, while parts of the Paleis Het Loo are closed due to an ambitious refurbishment. As the first pieces of contemporary art ever to be placed here, do they add to or embellish the garden in any significant way? The areas around each sculpture have been planted with colour co-ordinated bulbs so the flowers will intensify the effect. They are sensitively scaled so as not to dominate the setting, but appear somewhat lost in the midst of these intricate flower beds. Their symbolism, and even the fact that they are four component parts of a globe, could be lost on viewers who don’t read the accompanying literature. Libeskind perhaps could have invested more in development of the idea. Maybe the globe reference should have been stronger. They certainly pale in comparison to the profundity of Mark Wallinger’s Globe Upside Down sculpture, placed on the London School of Economics campus the same month that Libeskind’s garden launched. Wallinger’s globe — looking exactly like the globes we know, albeit 4m in diameter and turned upside down — highlights how global attention and economic power distort perception, revealing the proper scale of Africa in relation to other continents, with North America practically disappearing from view at the bottom of the sculpture.

Libeskind ultimately does have more power than most garden visitors to effect significant change – as do all architects and developers working in the world’s most carbon hungry industry — as he and his practice is engaged in the construction and masterplanning of urban projects all over the world, including many glass skyscrapers (surely the least eco-friendly typologies of all). Admittedly, I didn’t probe Libeskind on this point in person — for all I know he is trying his best to make these schemes as sustainable as possible. But we have surely reached the point when architects who are stepping up to champion climate awareness need to be showing that their money is nearer where their mouth is.