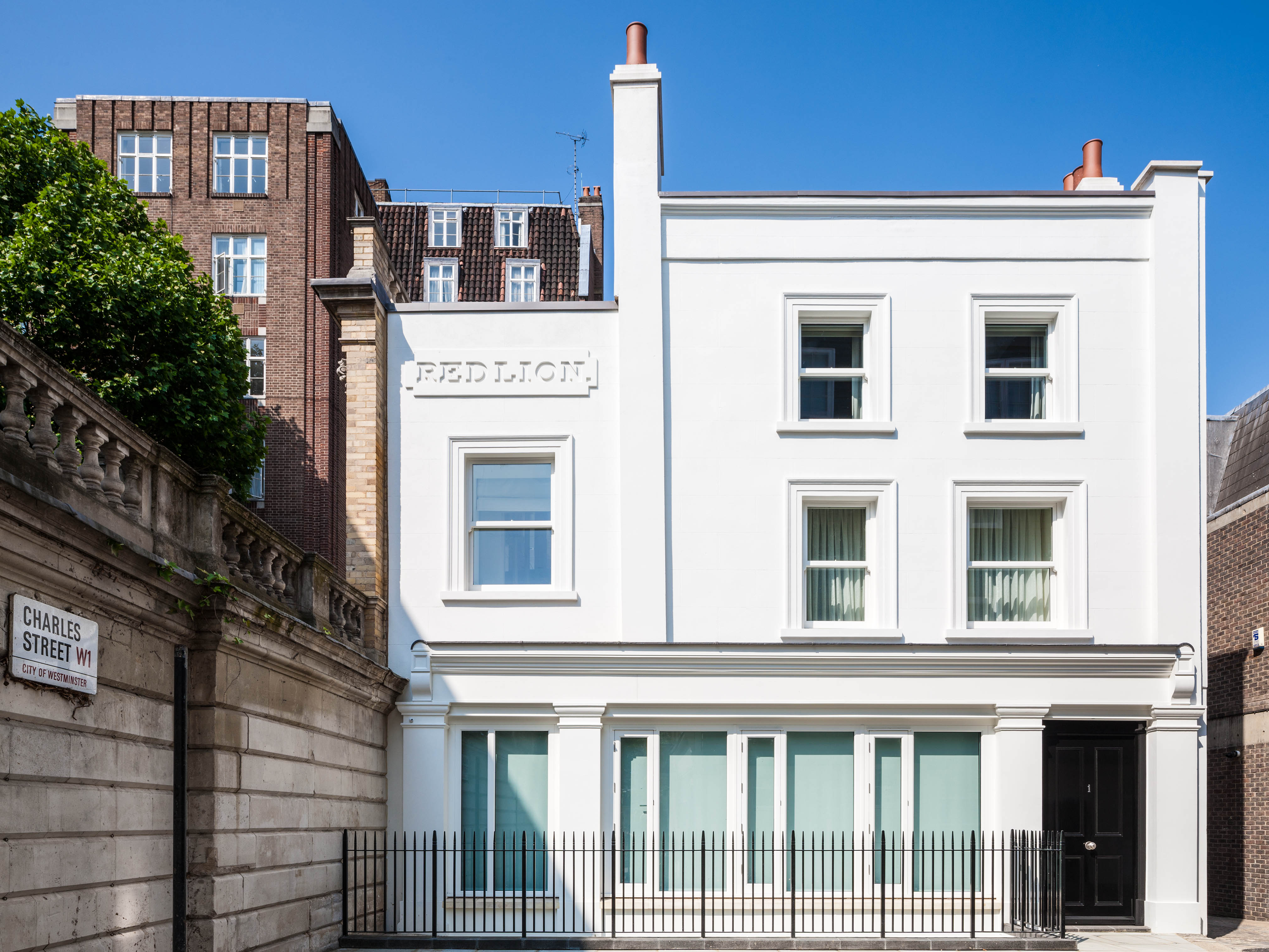 A seven storey townhouse has been squeezed into the space behind the restrained facade of an 18th century pub in Mayfair. Herbert Wright quizzed project architect Marcie Larizadeh on how its Tardis-like design manages to include six bedrooms and a swimming pool

In London's Mayfair, metal foliage is in 'conversation with Virginia creepers'. That's how Marcie Larizadeh of Squire and Partners described the interplay between a vine-covered facade on Curzon Street and an extraordinary field of aluminium leaves in bronze hues, facing it a block away. The latter forms part of the south facade of a new top-end townhouse, One Waverton Street, and she's the project associate architect. It's just one remarkable feature of a project that has managed to fit 800m2 over seven floors into a narrow site behind the retained facade of a two-century old boozer, once a haunt of Tom Jones.

The pub facade faces east, and its stucco has been repainted dazzling white, including the Red Lion inscription. But every side of the Mayfair house is different. The north side of handmade brick hosts a surprisingly discrete entrance from a narrow cobbled mews. Bringing light into the ground floor was a challenge because the site is bounded to the south by a light-blocking listed Georgian wall of blanked arches, balustrades and a pediment, partially shared with the Sultan of Brunei's Chesterfield House. A cour anglais, the architectural device that brings light into Victorian streetside basements, is situated between this wall and the house, and not only brightens the reception room but the generous double-height dining room sunk into a lower floor. Below this are two more subterranean levels, hosting facilities like a gymn, spa and 12.5m-long swimming pool. The plant rooms down there seem worthy of an office block, but it's all tucked away and acoustically shielded.

Constructing what is effectively a new building underground involved piling and creating a concrete box for it that is 12m deep. Georgian vaults were scrupulously documented before construction. Incredibly, all materials in and out were 'posted' through the Red Lion facade, because of severe site activity restrictions.

Upstairs are six bedrooms on two floors. Throughout the house, a variety of magnificent marbles and polished stone by Stone Theatre have been fitted, incidentally making each bathroom different. Some smaller windows are transluscently frosted because they overlook adjacent properties. The south facade is recessed at the cour anglaise, this middle section climbing 12m to incorporate a third-floor steel pavilion sited between patios, one with a patch of hardy grass green roof, the other above the Red Lion facade.

It is around the pavilion, and across the set-back part of the otherwise-stucco south facade rising behind and above the neo-classical south wall, that the metal leaves spread, like a Victorian repeating print. The bespoke coated aluminium leaves are a collaboration between Tuchschmid of Switzerland, whose artisan-industrial metalworks have included the cone on Sheppard Robson's BBC Portland Place extension. Each leaf has seven folds, there are three colours, and every now and then a leaf is missing in the array to enhance the organic feel. Larizadeh herself worked on the leaf design, making shapes with beermats, and comments that 'you get vine rhythms and colours come into play'.

In sunshine, the leaves positively glint and the old Red Lion facade dazzles, but nevertheless, One Waverton Street is the soul of discretion in a charming, hidden corner of London's most exclusive quarter. The result is an exquisite play of volumes, light and textures with artisan touches, a great piece of urbanism, and something that ups the game in townhouse design, whatever the market.