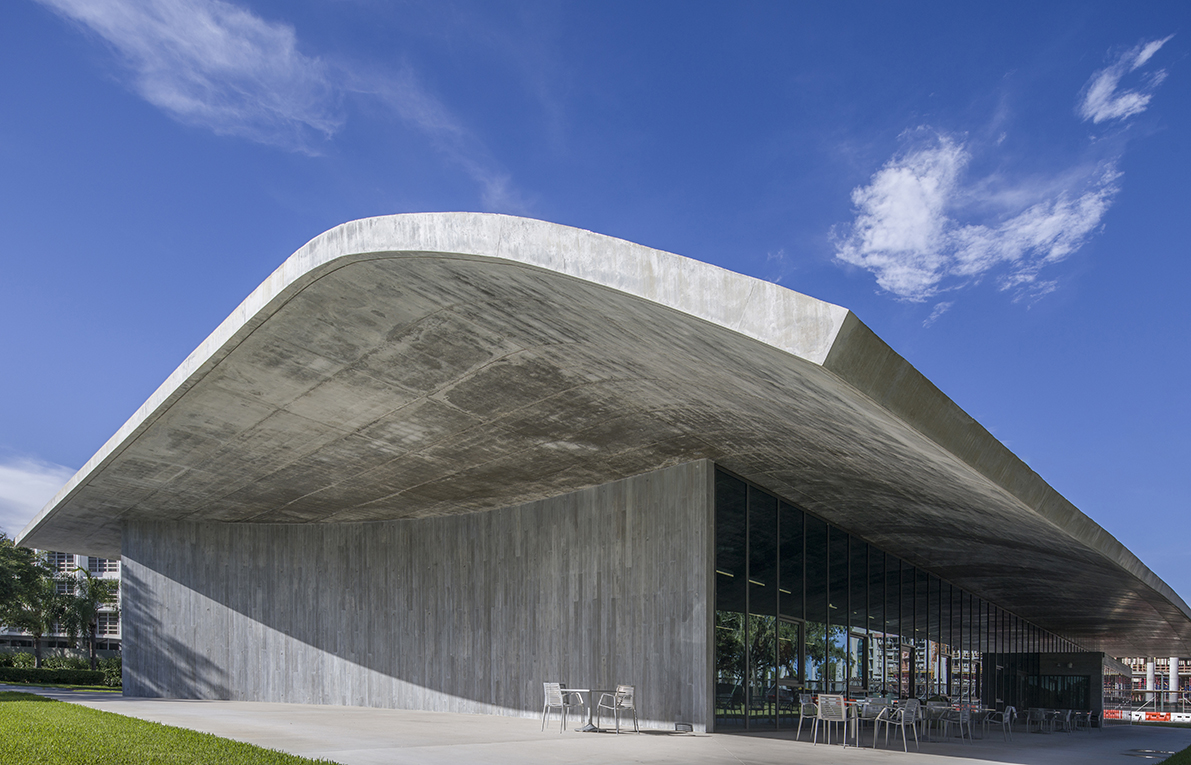 Arquitectonica’s studio for the University of Miami architecture faculty is both dramatic and minimal, gestural and functional

When Arquitectonica built its concrete studio for the University of Miami School of Architecture, local residents saw the unusual roof and assumed it had been damaged in a hurricane. ‘It’s actually a funny story,’ says project designer Ray Fort, when we visit the building on a sunny February afternoon. ‘The concrete roof had been poured in place two days before Hurricane Irma hit. After it passed, a worried local resident called 911 to say the building’s roof had collapsed.’

But the roof — the defining, elegantly sculptural and visually surprising feature of the project — is deliberately designed to droop dramatically, much like a crisp piece of paper fighting gravity. But the concrete roof — 0.5m thick at its thickest — is far from paper-light, and its cantilevered, curving form seems to defy the laws of engineering. It looks like it shouldn’t work — but it does. The studio building — officially the Thomas P Murphy Design Studio Building — is part of a wider masterplanning process at the university’s Coral Gables campus and augments the existing architecture faculty buildings on site. But the faculty needed a new, open-plan space for its students, who were previously mainly working in awkwardly converted residential blocks designed in 1947 by Marion Manley (Miami’s first registered female architect). ‘The Manley buildings were designed as housing, so the studios have an intimate, domestic scale which can be limiting,’ says Rodolphe el-Khoury, dean of the architecture school. ‘We didn’t have that big, open-plan room that defines an architecture studio. We also needed a digital fabrication lab.’ In 2011, the university commissioned the homegrown mega-practice Arquitectonica, whose projects often boast a powerful sculptural sensibility. Although construction only started in 2016, it was relatively quick, completing in autumn 2018.

Interestingly, for the new studio building, Arquitectonica designed an internal system of spatial configuration based on the proportions of the 25ft by 125ft (7.6m by 38m) Manley buildings, using a 25ft by 25ft module in three rows of five. But here there are no limiting walls: the modules, defined only by slender steel columns, gently suggest spaces in the open-plan studio which can be configured at will using moveable offices, pin-up boards and sound-absorbing curtains. In this way, the historic proportions that had previously limited the students are actually re-appropriated to increase the flexibility of space; one student comments how collaboration and interaction have increased since working in the new studio. Inside, the studio is stripped back and open plan, with mobile offices and felt curtains enabling flexible spaces. Image Credit: Robin Hill

Each term the internal layout is completely reconfigured depending on studios and students. The only non-adaptable space is the fabrication lab, an 81 sq m space, sitting half-in and half-out of the main studio volume.

There are other relationships between the studio and the existing faculty buildings: the west side of Arquitectonica’s building is rotated to create an entrance which aligns with the faculty’s Léon Krier-designed portico and core campus quad, ensuring pedestrian connectivity is seamless while maintaining required street lines and plot boundaries. Inside, the studio is stripped back and open plan, with mobile offices and felt curtains enabling flexible spaces. Image Credit:  Miami in Focus

Aesthetically, despite its minimalism, the new studio is a far cry from the bright white, art deco-like postmodernism of Krier (as well as the original modernism, also painted white, of Manley). This is a project defined by its materiality: raw concrete and glazed walls.

The concrete walls use both vertical and horizontal formwork detailing while that dramatic roof, as well as the internal floor, go without. The north and south sides of the building have fully glazed, 5.5m-high walls — with in-built windows. These are, in fact, the largest panes of glass in Miami-Dade County, an area where vulnerability to hurricanes means glass walls are typically a no-no. Fort admits it was hard to get approval from the city for hurricane safety, and the glass (by Tecnoglass) had to go through rigorous testing — but it finally got approval.

The simplicity of material allows the soaring lines of the building’s form to attract the attention they deserve. The roof, which droops down to half the building’s 5.5m height at the south-west corner, cantilevers dramatically on both the west and south sides, exaggerated by the elegantly curved western wall which creates the contextually aligned entrance. This curved wall also defines a sheltered ‘outdoor studio space’, and its acoustic qualities have it known as the ‘whispering wall’. The cantilevered roof isn’t just about effect though: on the south side of the building, the roof cantilevers beyond the outer glazed wall by 7.5m, so that the powerful Floridian sunshine doesn’t heat up the studio, or blind the students. This ensures relatively consistent ambient lighting in daytimes — and creates a shaded seating area, which doubles up as an events space.

Concrete may be used a lot in south Florida, but Fort explains: ‘We wanted it in its raw form as we didn’t want to cover the material up.’ Set only against glazing, there is a satisfying play of solid and transparent, heavy and light.

The building won the American- Architects 2018 Building of the Year Award this February. Meanwhile, Arquitectonica has been working on something a little different, though also on the Coral Gables campus. To the east of the studio building, across the green lawns, construction is underway on the practice’s student housing designed for the university, due to complete in 2020. Gazing across campus from the west side, there is a nice little dialogue between the smooth curve of the studio roof and the jagged roof of the six-storey-high student housing. Founded in 1977, the now-global practice continues to sculpt the Miami cityscape in inventive ways.