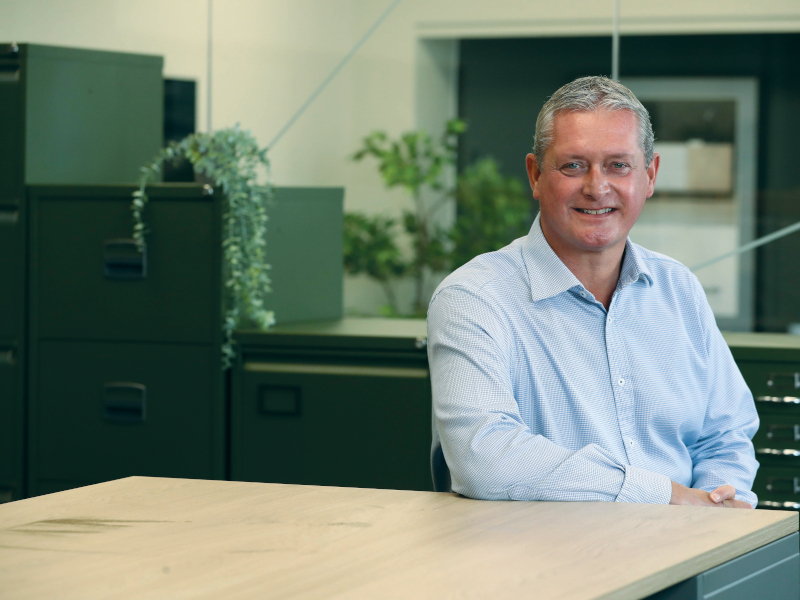 Richard Costin, CEO of Bisley, on the challenges of lockdown working

It goes without saying that early 2020 was a different time to start a new job: coming in with plans and objectives, only to find the landscape drastically altered as the realities of the Covid-19 pandemic became apparent. For Richard Costin, installed as CEO of Bisley in February of last year, the first signals that something was up came from the factory floor: ‘Some of our staff started to receive text messages from the NHS saying, “Go home”. And it scared us, it scared the business.’

Amid the uncertainty around the government’s plans to support businesses and workers, Costin tried to assess the situation. ‘I spoke to some of our competitors, spoke to the wider market, and people from a PR perspective “What are your customers doing?”’ The reactions were mixed, Costin explains, ‘But we decided the best thing to do was to close the factory, and that’s a hard decision to take.’

The decision was particularly difficult for a business as international as Bisley, which has extensive subsidiaries across the world, and works with markets that were affected at different times by the pandemic. ‘The US was very different... they didn’t stop. And all of a sudden, we’ve got a factory that is closed, so our orders just kept building and building,’ Costin explains.

Prior to Bisley, the new CEO had experience in related businesses: starting off with Banner, a large office supplies company ‘selling everything from stationary to computer consumables to office furniture’. He later had his own consultancy business, named Power Base Solutions, with clients such as Amazon, Staples, BHS – and also Bisley. Following some successful projects, during which Costin helped Bisley win some public sector business, he was invited back to work more with the company’s teams. Although Costin ‘thoroughly enjoyed’ working for himself, when Bisley’s chairman, Tony Brown, asked him to join as commercial director in 2019, he was glad to accept the offer. Costin describes Brown as ‘a remarkable individual, an absolutely charming gentleman’, who considers his business his family, and has breakfast with factory workers in the staff canteen rather than eating with other members of management.

Costin says his remit, from a business development perspective, was to ‘have a good look at Bisley. Going back over the last ten years, it hasn’t made money. And not because it has done anything wrong, materially.’ Costin’s experience in the public sector – with its specific way of writing tenders and bureaucratic processes – has also been a valuable tool for Bisley, and so, when the previous CEO, John Atkin, stepped down, Costin was promoted to fill the role – but then came the pandemic.

Throughout this difficult period, Bisley’s management tried to be as clear as possible with staff, writing letters to their home addresses every two weeks, giving presentations on what was happening, as well as arranging things like Zoom quizzes and more – ‘to try and keep as many people as motivated as possible,’ Costin says. Speaking to customers and manufacturers, many were predicting business shrinkage of up to 50%, while Bisley itself estimated a 30% reduction for the period. Costin admits sadly that it was necessary to restructure the business at all levels and some staff were let go.

After the initial shock and closure, it was able to reopen the factory after eight days with new safety measures. ‘We wrote to [the factory staff] and said, “Are you prepared to come back?” Costin explains, ‘because we weren’t going to force anybody.’ The company worked on its orders slowly, not wanting to burn through the order book until the future was more certain. In pacing the restart of manufacturing, it also freed up time for Bisley to try things a bit differently. ‘What innovations can we do? How can we act as entrepreneurs?’ Costin recalls.

Things were certainly different: while some markets – North America, Germany, were thriving, others had gone quiet. The UK was quiet as a whole, but the public sector had been spending, with essential government refurbishments under way. The most notable shift was to Bisley’s online consumer business – which usually brought in £3,000 a month. ‘Now we’re doing 15 times greater than what we started off with,’ Costin effuses. ‘Black Friday week, we did for the month… around £75–80,000.’

These changes necessitated different marketing, customer services and even new products to be designed. Looking at the list of furloughed staff, Costin found ways to bring teams back to work. Dealing with the consumer like never before, Costin decided to bring back customer services. ‘[The consumer] want[s] to know exactly what’s happening, when their product is going to be ordered,’ Costin explains. His solution, unheard of in the industry, was to create an app similar to that of a pizza takeaway, which updates the customer on the preparation and journey of their pizza in real time; Costin wanted Bisley’s own customers to enjoy these same levels of communication.

With marketing, it invested heavily in social media and ‘putting our brand out there’, Costin says. And in terms of product – well, with the rise of homeworking, there was an increasing demand for home office solutions. While Bisley has typically outsourced design, Costin took its four product designers out of furlough to create a new range for this burgeoning market. ‘I emailed [them], introduced myself and said, “Look, you guys are product designers. You are creative, you’ve got flair. If I gave you an opportunity, a no-holds-barred opportunity, to be able to go and design products that we have to be able to make in our factory...”’ And they did.

Bisley brought the results – the Belong collection – to market within three months, ‘and we did a launch for the [line], put it on the shop, and it went absolutely vertical,’ Costin thrills. ‘All I did was say, “This is the idea, you come up with it.” And they’ve done it. The technical people, the people in the factory, they’ve pulled this all together, and this is the first time it’s ever happened at Bisley... ever. You’ve got this whole new camaraderie [among] people, [saying] “Now, what’s next Richard, let’s come up with something else.”’

Following the success of Belong, which found its way into consumer magazines in a way previous Bisley products never had, the company followed up with an update to its Be collection, combining personal storage with subtle space division. This has already brought in large orders from resellers.

Costin knows that what happens next is hard to predict, but he is proud of what Bisley has achieved and how its teams have been revived. It may not be exactly what he envisaged back at the start of 2020, but Costin is glad to have ‘dragged Bisley into a new era. And do things differently – that’s the most important part.’