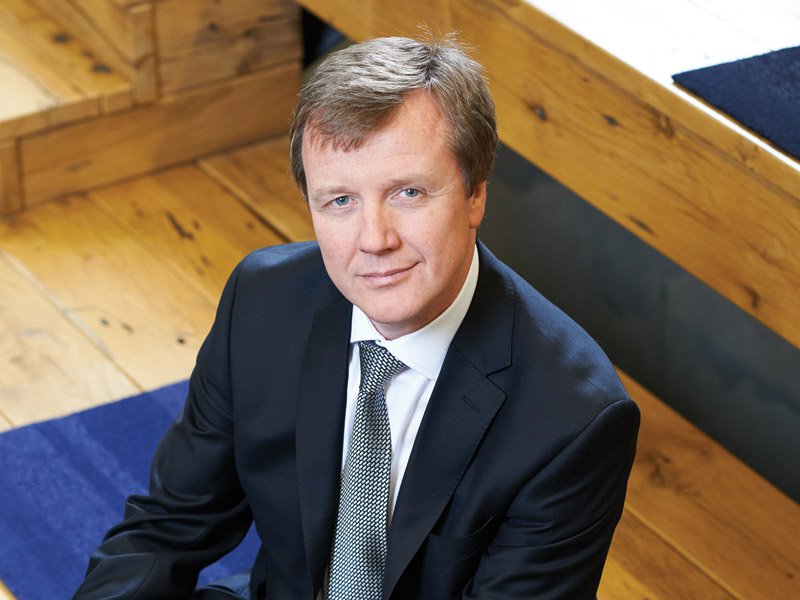 EMEA president of Interface, Nigel Stansfield is an expert textile technologist with 30 years’ experience. He is also a passionate supporter of sustainabilty, including the Interface project Net-Works

Nigel Stansfield has more than 30 years’ experience as a textile technologist, and is an expert in yarn, carpet and carpet manufacturing.

He is president of EMEA for Interface, joining the company in 1997 as part of an acquisition deal with his former employer. Subsequently, he has spent the majority of his career to date working at Interface’s UK HQ in Halifax.

He regularly speaks on a variety of subjects including open innovations, biomimicry, supply-chain strategy and inclusive business, and has played instrumental parts in many key business developments surrounding sustainability. Stansfield is particularly noted for his role in setting up Net-Works; a programme designed to tackle the growing environmental problem of discarded fishing nets as well as supporting Interface’s Mission Zero goal to source 100 per cent recycled material for its carpet tile. Last year, he moved into his new position of EMEA president, working his way up through the industry from what he describes as a classic apprentice for seven years after leaving school in the mid-Eighties. ‘I was originally schooled in weaving and knitting and I [then worked in the] manufacturing environment,’ says Stansfield who was running planning and logistics with his previous employer. Stansfield was moved into a new role after the company was acquired by Interface, owing to job duplications across the now one business.

Tasked with helping to upgrade the manufacturing systems across the new business it was a stark contrast from his previous 12 years of employment, which he describes as being in a ‘very traditional textile business’. By now in his 30s, Stansfield quickly found himself being opened up to the ‘opportunity of what a global-textile leader could deliver’, with its cutting-edge technology. He recalls being staggered by it all, while also learning fast about sustainable manufacture. ‘I basically packed a suitcase and travelled the world for three years! I went to all of the manufacturing plants within Interface, met all of the senior leadership – including Ray Anderson who founded the business – and went into all of their manufacturing and customer-service systems’, he recalls. ‘And within these three years I really got to know how this business worked,’ Stansfield says.

Anderson had set out the company’s sustainable vision – Mission Zero – in 1996, and to Stansfield’s own ‘surprise’ realised that he shared the same vision (to eliminate any negative impact on the environment by Interface, by 2020) and passion for sustainability. He embraced what Anderson was pushing for, and says it has been the underpinning factor in his career to date.

‘I went from a secluded, old-style business in West Yorkshire to a progressive global leader – a technology-driven, innovation-led, design-orientated company. And then, suddenly, Interface had bolted on this whole new purpose to become a sustainable organisation,’ he says.

‘It was enlightening to say the least, and 20 years later I’m still in the middle of it all.’ Stansfield then joined Interface’s European marketing team, which was responsible for company innovations. Mission Zero brought much focus on Interface’s sustainability journey: products included recycled content, and among other environmental-impacting initiatives renewable energy was being sourced. Stansfield helped devise a programme featuring what he frequently refers to as an ‘inclusive business model’, which included social sustainability issues. A programme was launched, based on this model, that had benefits for everybody in the supply chain as well as for the company.

In 2008, Interface launched a product called Just. It featured river grass and bamboo among other natural fibres, hand-woven in India. It was produced under a programme called Fair Works, a Fair Trade-style business model to ensure an inclusive supply chain. While it had a great social story, the product was commercially unsuccessful. ‘In the marketplace it was very difficult to sell. It was disconnected from Interface’s core product line, but we learned from it,’ says Stansfield, describing Just as a ‘successful failure’. Although it was not a popular product, Stansfield and his team had learned much about developing inclusive business models and supply chains.

In 2012, Stansfield had progressed to heading Interface’s global innovations, as well as being involved in running the business’s global supply chain. ‘I started to then think, again, about how we could become more socially inclusive in it,’ he says. About the same time as Interface was running the Fair Works programme, one of its key nylon suppliers, Aquafil, had started to develop the technology of taking waste nylon from different sources, breaking down the plastic’s make up for reuse – otherwise called depolymerisation. The company had identified numerous waste streams from where waste nylon could be sourced, one being commercial fishing nets.

‘That was the light bulb moment for us,’ says Stansfield . ‘We thought, “Hey, wouldn’t it be great to connect into developing and emerging communities [for sourcing used fishing nets], particularly where there are terrible issues around over-fishing and pollution?’’ So, we started what became Net-Works, by getting a group of people together and looking at how we could find ways of sourcing fishing nets with this criteria.’

As Interface had previously done with Fair Works, it wanted to seek out its fishing net source using a transparent supply chain, providing income-generated opportunities to connect the developing world with a global supply chain. It partnered with ZSL, which had already identified the Philippines as having vast over-fishing related problems. Interface piloted the scheme and three years later Net-Works was born. ‘The beauty of Net-Works is that the carpet tile looks the same; it’s not like the Fair Works product, which was very different,’ says Stansfield. ‘You get the social story, but the product looks exactly the same.’

But while being a great ‘social story’, is it working? Stansfield says that is a relatively young scheme, and Interface is in the process of ‘validating its preliminary conclusions’ from the Net-Works initiative. ‘What is very clear is that we have been not only able to give [the workers in the Philippines] a supplementary income, but we’ve also set up a community banking scheme where they can save money and use it for food or education,’ he says. ‘The feedback has been extremely positive so we are continuing to expand the programme. Since Stansfield took over his new position, Interface has developed its first collection of LVT flooring – a market need for ‘modular resilient flooring’ that meets customer demands.

The range has been designed with current best practice, Stansfield says. ‘We will do what we have done to the carpet tile industry; we will convert it,’ he says. ‘[Sustainability] has been the underpinning factor of my journey and all the different roles that I’ve had. I have relentlessly pursued not only personal career progression but also the business’ progression towards Mission Zero and its ambition of helping the world understand the benefits of modularity, and driving growth initiatives from that. Sustainability and the growth of the business are very much linked.

‘I think Interface is ideally poised in this market and by bringing our 20 years of learning to convert carpet tiles to a more sustainable solution has helped the market to become more sustainable. We’ll do the same to the LVT and the whole resilient-flooring market, in time’.