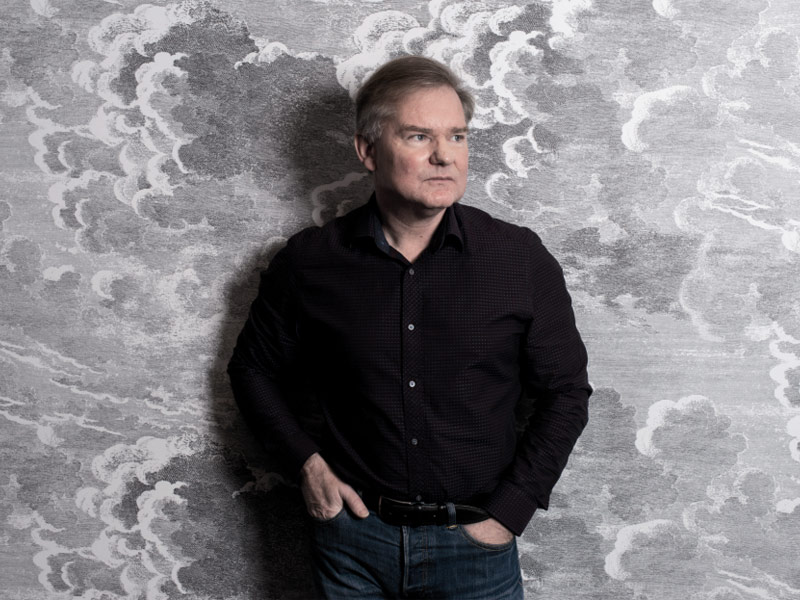 With a lie-flat bed for airline BA in Acumen’s portfolio, founder Ian Dryburgh is all for lying down on the job...

A 'physically small company, doing the biggest jobs' is how Ian Dryburgh describes Acumen, the design company he founded in 1981. As we sit in Acumen's office in Clerkenwell, it is indeed smaller than I expected from a high-profile, award-winning company, which has a seemingly endless portfolio of design projects for planes, trains and automobiles. Even Action Man's 'Scuba-ski' was carefully styled and designed. With Dryburgh's career to date spanning 30 years he tells me how a little ignorance, taking on the small commissions and continually punching above his weight landed him his dream job. Dryburgh studied civil engineering at Oxford University - and hated it. 'I passed it, but I had made a big mistake. My school didn't give much careers advice - it was all very posh public school,' he says, with his teachers more geared to preparing students for medical or law school. 'They ran out of steam if you were an artist. I was half-scientist and half-artist and my teachers assumed I was going to be an architect.'

Not a completely out-of-the-blue guess either, as Dryburgh's grandfather (David Wilson) was the chief naval architect at Harland & Wolff working alongside Thomas Andrews on the design of the Titanic (both left the ship in Cherbourg as Wilson was called ahead to South America to manage the dry docking of, what was at the time, the biggest ship in the world).

There was an assumption for Dryburgh to follow an architecture path. 'I liked the idea of architecture, I still do, but when push came to shove I didn't want to invest seven years of my life to possibly be, as I saw it, a glorified draughtsman' he says.

Dryburgh says that he knew from the age of 16 he wanted to own his own business, an aspiration influenced by his father, who produced injection moulding machines in Switzerland. It was at this age that Dryburgh was excelling in his passion for sailing by becoming Britain's youngest yachtmaster. Circular paper hand towel Ora is being produced in Cambridge, with Acumen as a founding shareholder.

'I always wanted to design yachts and I won a yachting design competition when I was quite young,' he says. 'My school never told me that I could design boats and cars, which I loved doing; I didn't know you could make a living out of designing things like this.'

It wasn't until Dryburgh was studying for his civil engineering degree that he learned there was such a thing as 'industrial design' from the course leader, who had identified Dryburgh's thirst for design. After graduating from Oxford Dryburgh went to Lanchester Polytechnic (now Coventry University) for a degree in industrial design - then the only course in Europe to specialise in transport design.

'I was the first person on my course to choose a boat project, rather than a car one,' he says. 'I very rarely mimic what my contemporaries do. If everyone goes this way, I tend to go that way and that's kind of what I do!'

After graduating, Dryburgh relocated to Germany after accepting a junior design position in the styling department at Mercedes Benz. 'There were 12,000 applicants and three days of interviews,' he recalls. 'I got the job and it was my biggest break ever - and the only proper job I ever had!'

Working as a designer for a year with Mercedes Benz completely enveloped Dryburgh. He says it accelerated his career and, after returning to Britain, he met designer Peter Murdoch. Together they set up the product design department at the hugely successful interior and graphic design company, Murdoch Design Associates. Dryburgh says: 'We connected and he [Murdoch] said, "Look, see what you can make of it and you can camp out in my studio", which was in Knightsbridge near Harrods. Yes, that'll work!'

Now laying the foundations for his own company, Dryburgh identified this period to 'do anything and learn to sell' as well as a chance to gain credibility and diversifying his design discipline. Taking advantage of a funded consultancy scheme, run by the Design Council, enabled him to be funded and then part-funded by the government while working alongside Murdoch and his clients.

'That really helped me get going and it got me into lots of different areas,' he says. 'It was through Peter that I worked with clients such as BP and the first-ever "primary signalisation programme", a computer-controlled petrol forecourt pole sign system with a flexible digital controlled display system using dot-matrix display technology. It wasn't quite what I thought I'd trained for, but never mind!' Dryburgh also designed architectural products like door handles, office partitioning and cubicles during his time with Murdoch.

Dryburgh's first commercial transport project was with Sunseeker power boats after 'convincing them that they needed a product designer to work with their naval architect', Don Shead. It was a significant turning point for Dryburgh as it not only promoted him professionally, but also he drew on all his design knowledge and experience to date. 'The design turned them from every other boat to coloured boats; the cockpits to look like an interior; creating a multifunctional use of space, and all those disciplines I had learned from being a product designer and car designer were used.'

Arguably the most high-profile design of Acumen is 'Bed in the Sky' for British Airways, launched in 1996, which saw the first flat-bed design used on a commercial plane. The design flipped the airline industry on its head with the birth of a new market sector dedicated to luxury travel. The Residence for Etihad Airways on the Airbus A380, a three-room VIP interior design by Acumen. It is due to enter commercial service at the end of the year

Still working with a number of airlines today, Acumen also invests in the company's own design, which means walking away from a number of 'paid' jobs. Dryburgh explains: 'I realised this from early on that we would do miles better if we put money where our mouth is and sell designs that are our own invention. You can do way better than earning money on fees. This means turnover and employee figures are irrelevant to the business model, as we are defined by what we do as much as what we don't do. We can sell our own product for tens of millions of pounds.'

It's hard not to be impressed by Dryburgh's entrepreneurism that has been present from an early age - perhaps one of his father's genes. Well known for its transport design, Acumen also designs a number products, including paper towel Ora, which Dryburgh is keen to build on. 'We're actually founding shareholders in a paper company and own a factory in Cambridge that churns one of this things out every four seconds,' he says of the Ora product; a circular, stackable, and singe-hand-application paper towel that won The Grocer New Product Award 2014. 'Who would have thought that this idea of a round paper tissue would be so successful? But it's a disruptive product and that's what we've always been interested in; shaking the tree and doing things that is going to move the industry on.'