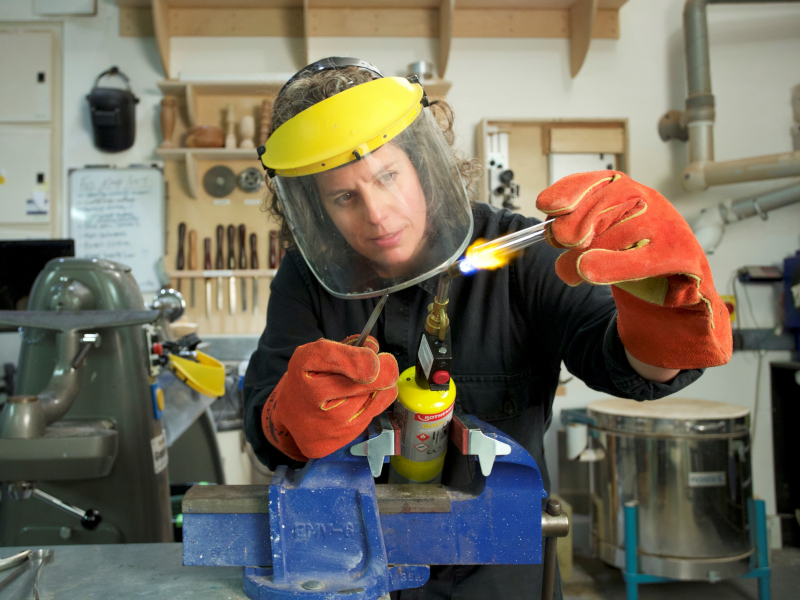 WHAT DO YOU think of when you see a spoon? You’ll think about eating, about taste; you might imagine putting that spoon in your mouth, perhaps.

Dr Zoe Laughlin spends her time considering, and making, things – like a set of spoons in different metals, a cymbal made of glass, imaginary rocks, a paper clip that springs back into place, or architectural elements 3D printed in clay. The latter, various iterations of which she waves at me over the Zoom link, have been proving difficult. The material they can’t quite get to grips with here? ‘The ancient wonder that is clay, used for millennia to make stuff,’ Laughlin says. The difficulty, she clarifies, ‘is not building a 3D printer that can print clay – it’s getting the clay right so that it can be printed. And it’s very temperamental, and that’s a real craft’.

Much of what Laughlin does is through the Institute of Making (IoM), set up in 2010 with co-founders Mark Miodownik and Martin Conreen. They have a number of staff, experts in different areas – including a ceramicist who will be helping to solve that clay problem at some point in the future. The institute’s name both acknowledges and riffs on its university setting (University College London), balanced with the more informal notion of ‘making’ – predating its recent resurgence, Laughlin notes.

The IoM’s premise is simple: established to ‘celebrate and explore the relationship between materials and processes’, it is a place where people from across disciplines can come together with the goal of making stuff. But it also presents a challenge to how research is typically ‘presented, and embodied and recorded’ in a university setting, Laughlin explains. ‘There’s a whole lot of knowledge that isn’t done like that, and isn’t communicated like that, and isn’t learnt like that and isn’t experienced like that, and making is something that is hard to learn if you don’t do it. It’s a practice. Be that a practice that might in one realm be called open-heart surgery, or broadcasting, or blacksmithing.’

This broad embrace of making is typical of the multidisciplinary approach of Laughlin and her fellow IoM colleagues and members. Laughlin herself is an artist, designer, engineer, materials scientist and broadcaster. When I ask her what came first, or where her interest in making first originated, she says that it is hard to pinpoint. There were ‘some really seminal sensations around materials and processes and making that I can remember from a very young age,’ she says. ‘I had a bedside table that was made of pine, and the grain of the wood was really pronounced. And I discovered that if you run your incisor down some of the pine it went in, and some of it was hard and didn’t... So then I sort of engraved the entire surface [...] I’m basically ruining this piece of furniture but discovering something about the material.’

That wasn’t the last time Laughlin would damage things in the name of knowledge: I’ve seen a video clip of her gleefully dashing an unassuming-looking round object – in fact a sample of the second-hardest material after diamond – at a mug on live TV, causing it to smash. ‘My phrase would be: “damage is a revealer of materiality”. How things break tells you a lot about what they’re like’, she explains. 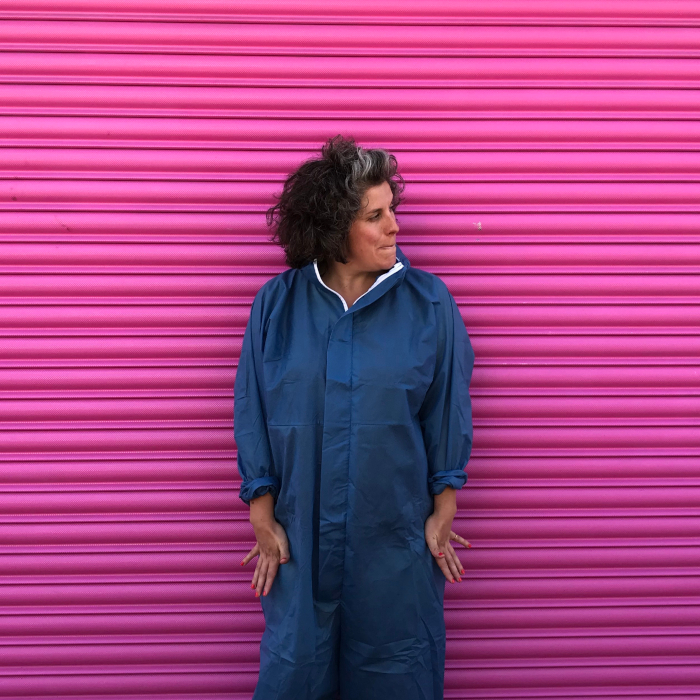 Zoe Laughlin co-founded the Institute of Making in 2010

While education tends to silo art, design and engineering, Laughlin believes in looking for the ‘biggest umbrella’ under which to play. For her own higher education, Laughlin chose the less prescriptive route of art college, where students could do whatever interested them – including scientific experiments. Laughlin completed a MA in scenography and sculpture from Central Saint Martins College of Art and Design, and a PhD in materials within the division of engineering at King’s College London.

Returning to those spoons, she explains how in a ‘pure science experiment’ they would likely have cut basic spoons out of metal sheet they had to hand, but with her approach: ‘Well, there’s an object that exists in relation to the mouth, which is the spoon, and it is 100 times harder to make a proper spoon than it is to cut it out – it’s not efficient – but what you bring to [the experiment] is so much more, because you’re bringing all the cultural associations.’ Such an experiment will still provide scientific outcomes, she reiterates, but what’s more, Laughlin adds, is that ‘later, when that research is over, because it’s a spoon, it can explode into the world in a different way [...] it can explode into the world with a whole layer of meaning and resonance that normal experimental apparatus doesn’t have. So in making the object, you’re making experimental objects and apparatus and equipment, but also, a sculpture; also, a utensil; also an everyday object that people know the name of.’

Laughlin describes the materials library as offering a lens on the world, and that building it would continue to be ‘a life’s work’. There is currently no sign of it stopping, and the IoM will soon be expanding to a second location, ‘ten times’ as big, in UCL’s new East Marshgate Campus by the Olympic Park. The IoM will have its own building within the Stanton Williams-designed building, which Laughlin hopes will be a ‘cathedral to materials’ – an appropriate veneration, given her raison d’etre, perhaps! There, the IoM will be able to explore areas such as food – a ‘great starting point’ for materials engagement, Laughlin explains, and one that she is already well-known for, through her BBC Radio 4 show, The Kitchen Cabinet. 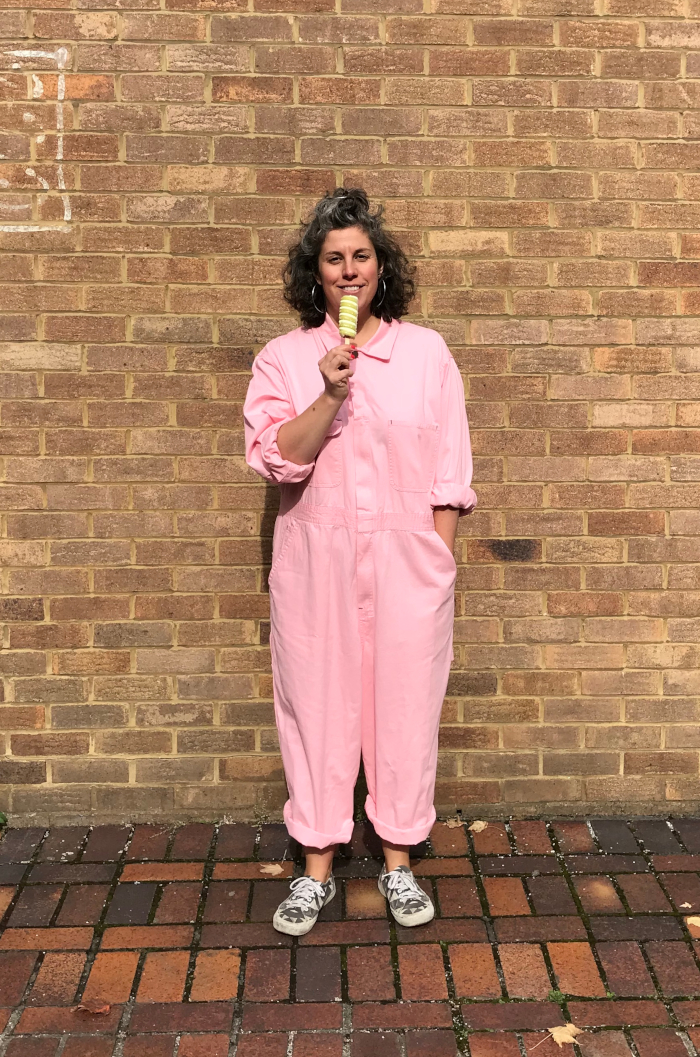 After a busy year at the Institute of Making, Laughlin was keen to take the summer break to ‘walk, draw, make’ and visit friends and family

As Laughlin illuminates the endless possibilities of materials, deciding what to work on seems an impossible choice. She explains that some of her own or the IoM’s projects might stem from an idea that pops into her head (that glass cymbal, for example), kept on the back burner until a suitable collaboration comes along; others might start with art (drawn studies of rocks, becoming imaginary rocks, becoming an investigation into how to fake materials); others might be linked to funding.

Some projects, meanwhile, have pressing issues behind them: inevitably, waste has been on Laughlin’s mind for some time, as an unavoidable by-product of all the ‘stuff’ sent out into the world. ‘It’s really incredibly humbling when you spend your entire life celebrating this stuff, to then realise that it is also a huge problem and there it is in the bin’, she explains. In response, Laughlin created the documentaries The Secret Life of Landfill: A Rubbish History (2018), and The Secret Science of Sewage’ (2021), while the IoM have current research projects looking at composting, plastic waste and repair, including a repair workshop coinciding with COP26.

How you speak about important matters makes a difference, and this is a key part of what Laughlin does so well – in person, on tv and radio, and online. She describes the team’s approach as one of ‘delight and curiosity’, which seems to manifest as an irresistible energy bound to engage an audience. But at the same time, Laughlin explains, the topics are explored thoroughly and responsibly, bringing experts such as economists and life-cycle analysts.

Part of her simply enjoys the pure performance of her broadcast appearances, but more crucially, Laughlin explains, ‘if you don’t hear someone talking about these things in the public domain, how do you even know that it sort of exists, right?’ She thinks materials need the same kind of representation as medicine gets: ‘We all have a body, and there’s lots of things about the body that people need to be educated about, informed about, are going to be empowered about, by understanding their health, their happiness, their psychology… [But] we also all have things, right?! [...] And those things don’t just miraculously appear in your life; they have histories, they have stories, they have politics, they have economics, they have ecological angles; you can take that one object and unpack it from many different directions.’

Laughlin’s rapid, excitable conversation and prolific output suggests she moves a mile a minute at all times, but when talking about what she’ll do over her summer break – the IoM follows the academic year – she describes a familial link to a different kind of time. Both sides of her family are of farming stock, from a world run by different rhythms and notions of production. She recalls conversations with her grandfather, where he would say to her, ‘when you’re 50, Zoe, you need to cut this tree down.’

It’s a percipience sorely lacking in the current age of immediacy, so Laughlin has started asking young engineers and designers in recent years: ‘What would it be like to not call yourself a designer, but to call yourself a materials farmer? Because you need to think of the whole process of it, and the whole life of it, and you need to maintain the soil to be suitable for that activity in years to come. You can’t just burn through all this stuff and make these things without knowing where the stuff comes from.’

As I leave Laughlin to finish up her year, surrounded by an array of different objects, it’s clear that what she and the IoM does is a world away from the heavily marketed ‘maker spaces’ and ‘innovation labs.’ Hers is a more organic, creative process. Over her time off, she’ll visit friends and family, and ‘walk, draw, make. Repair some trousers that I’ve been meaning to stitch back up. Just [...] do stuff, which will always feed back into the day job.’ She also mentions a few extra projects on the horizon – including a materials workshop with experimental performance group Figs in Wigs (included in FX May/June 2021) and a secret project involving potatoes. I’m not sure what to make of that, but I look forward to finding out.