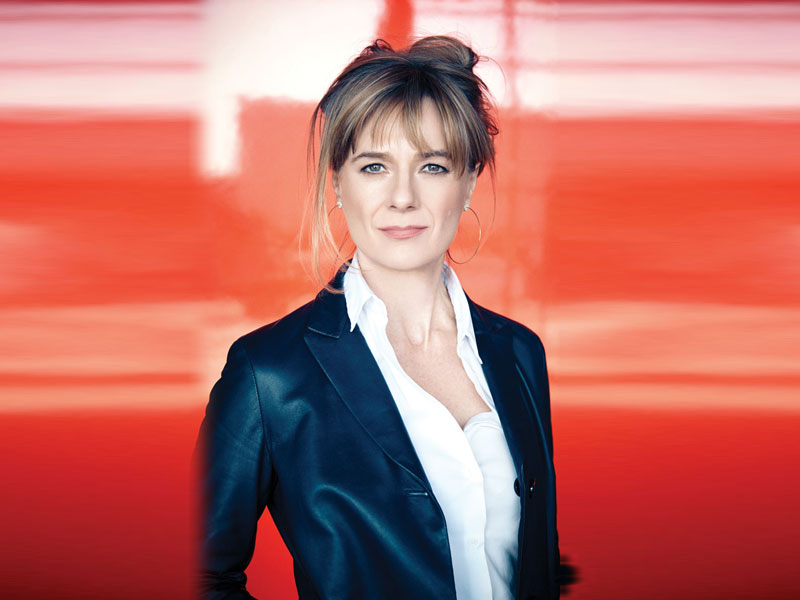 We are seated comfortably on one side of the large open space that makes up the North London studio of AL_A, yellow socks nestled in the red carpet (mine), bare feet curled under on the sofa (those of the studio’s founder, Stirling Prize winning architect Amanda Levete). The state of our feet are worth noting: it’s a signature move by Levete, a blanket rule that anyone who enters the studio must take their shoes off and leave them by the door, whether client, consultant or anyone else. Levete feels it sets the tone for their operations – she clarifies – ‘it’s very much the sense that we’re all in this together, and you’re not in for a passive ride’.

Within the open-plan studio, all the staff are seated at identical desks; their arrangement changing depending on the projects being worked on. The climate is collaborative. There are three other directors; Ho-Yin Ng, Alice Dietsch and Maximiliano Arrocet, who have all followed Levete from Future Systems, the practice she ran with her ex-husband Jan Kaplický until his death in 2009. Despite the continuity of the team, the two practices have plenty of differences in their approach. One, for example, is that the working methods are more collaborative at AL_A: Levete is clear that they are all in it together. All four directors, hailing from different continents, work on every project, always starting with a conversation together in the studio. When asked, Levete mentions that she and Dietsch are more conceptual, whereas Ng and Arrocet are more technical, but she assures me the differences are minor, and mean they have more confidence in what they produce together. They all have to agree before they proceed with a project, and are equally committed to technical rigour in all they do.

Past experiments with materials and technique are at hand like an installation-cum-archive on one side of the studio, both celebrating the past and acting as source material for the future. Various iterations of recessed grouting for the V&A project are ready to be picked-up and examined, and a collection of ornately-packaged tin cans from TinCan (a pop-up restaurant operated by AL_A for three months), are lovingly preserved in a glass case. Levete’s hands-on approach might be read in this project ephemera displayed in the studio, but is more clearly understood in a number of self-initiated projects. These are AL_A’s remedy to a problem Levete sees in architecture today: ‘as a profession, as a discipline, we’ve allowed ourselves to become a bit marginalised’. The projects include Pitch/Pitch, stackable five-aside pitches for temporary plots around the city; TinCan, their end-of-lease pop-up restaurant in Soho that sold only tinned fish, and an after school architecture club run for the primary school across the road for two years. These projects are crowd-funded or require interested investors, and ultimately take up the studio’s time without financial remuneration. They can be a little slow off the ground, but Levete is keen to persevere.

Levete is excited about all that they are working on, and considers all their projects equally important – they don’t take anything on unless they believe in it. Current projects include: remodelling Galeries Lafayette Paris Haussmann; two buildings at Waldham College, Oxford; a Maggie’s Centre in Southampton, and two medical buildings in Cyprus. A prospective venture is a competition between four teams commissioned by the city of Paris to reimagine the visitor experience around the Eiffel Tower. Levete is keen for this new opportunity: ‘working for a city, that’s very exciting! It’s a whole different way of approaching a project.’

Levete is perhaps best-known for designing Lord’s Media Centre (for Future Systems), Sky Central, and notably her work for London’s V&A museum and MAAT in Lisbon. When pushed to choose a favourite typology, Levete says she loved working on these cultural centres, but is equally as interested in infrastructure projects, as they are still a matter of ‘connecting people ... whether it’s a bridge or a landscape’. An unexplored area for AL_A is social housing, which Levete would love to pursue, but so far, ‘they haven’t been asked’. Levete is certainly socially-minded. One ambitious community project is situated in Moscow, in areas of dense soviet-style housing with little to no facilities for the community. Here, AL_A have designed a ‘network’ of malls and much-needed amenities in 39 old Soviet-age cinemas.

Having heard choice quotes about Levete’s rebellious teenage years, such as being ‘thrown out’ of private high-achieving girls school St Pauls for sunbathing naked on the roof, I ask her about this aspect of her personality. She wryly points out that she has grown up a bit in the subsequent years – Levete is now 63 – but later on acknowledges a recent encounter with a developer she last met with in the 90s, and reflected that she hasn’t actually changed all that much. The anecdote in question was from her Future Systems days, where a developer invited them to design a sculpture, and she, rather frankly, said ‘you know what, I think you should keep your money for something more important!’ She laughs, but it represents something she feels is important advice to new architects: that ‘being clear about what your objectives are, and being honest, and holding out for what you really believe in, and saying no to what you don’t believe in ... is as important as pursuing what you do.’

Alongside her architecture practice, Levete has written on contentious issue for numerous publications, such as the Guardian, The New European, Prospect magazine and CNN. She believes it is the responsibility of everyone – not just architects – to speak out about the things that matter to them. Brexit is high on Levete’s mind, not just because Levete’s studio and the wider architecture profession is very international, and Levete is clear in her opinion that the UK’s looming departure from the EU is a travesty. But while she is dismayed, she sees hope in the future generations, amongst whom ‘there’s a new sense of collective responsibility ... a commitment to change things for the better.’

Levete admires young practices such as Assemble for harnessing this energy. As for her own commitment to the future, Levete’s after school club is a perfect example. Its key notion was giving the children a chance to experience the professional world outside their classroom environment – physically entering a space of which they would otherwise have no real understanding or perhaps no concept at all. The kids were given an unusual level of respect and treated ‘like VIPs’ for the duration of their time there, and at the end of the project, the entire studio lined up to see the their presentations. Levete imagines rolling this out at a nationwide scale across industries; she imagines Goldman Sachs sending a black cab to take these school children to the trading floor.

Is this an intervention against our well-connected but ‘more isolated than ever’ world? Levete hopes for better communication across industries and demographics. Previously, Levete has spoken at literary festivals, ‘where you get to meet and hear people that you wouldn’t otherwise come across ... Whether it’s an economist, or an author, or a medical practitioner’. Cross-disciplinary exposure, she says, is one of the best parts of the job: ‘when you’re given a commission for a building... you’ve never worked on that typology before, ...you have to immerse yourself in a new world, and that’s quite exciting. You come out changed. ‘

Levete says: ‘it’s so important as an architect to take a kind of position when you’re designing buildings, not just about the building within the site boundary you’ve been given, but looking at ... the kind of responsibilities and impact that go beyond the building’. This suggests architects might step outside what they consider their remit, or within their power to change. A simple, but hard-hitting comment from Levete stands out: ‘we should be more entrepreneurial, ... because there is a lot of money out there, and there is a lot of need out there. It’s not beyond us to put those things together.’