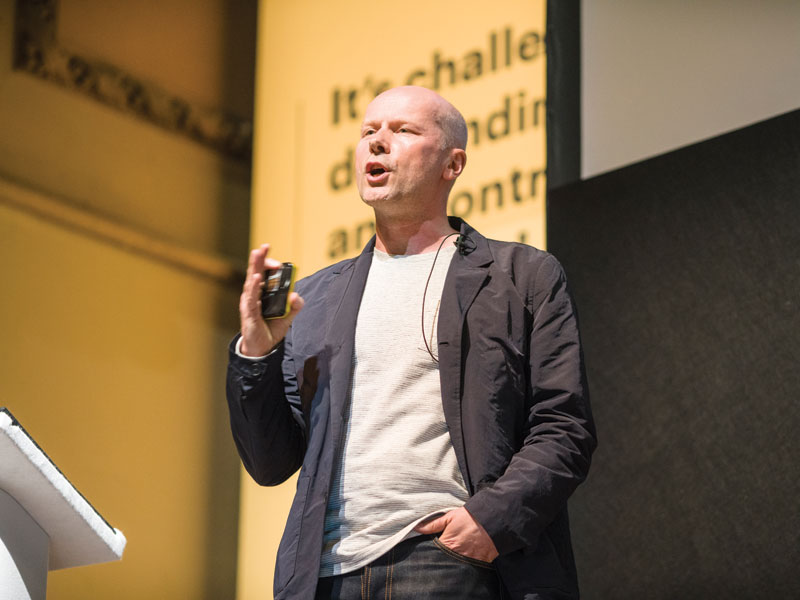 Michael Pawlyn, architect and founder of his practice Exploration Architecture, is in the vanguard of biomimicry in architecture, which formed the basis of his talk as a VIP speaker at last year’s FX talks.

Michael Pawlyn is a name well known to many in the industry; if you haven’t come across his work, then you might have come across a TED Talk of his online, a book he has published (Biomimicry in Architecture) or perhaps you saw him speak at last year’s FX Talks discussing his years of research and creative outcomes in architecture and design featuring nature inspired biomimicry? Ahead of the next edition of FX Talks, taking place this spring, I caught up with Pawlyn to find out more about how a love for architecture, science and creativity came together to shape his career to take a more unconventional approach to architecture and design.

‘Growing up I was really into making stuff; both my parents were quite creative and as a child and teenager I would spend a lot of time after school in the woodwork and art rooms.’ When he was a teenager, Pawlyn says he became interested in the politics of the environment as well as biology. ‘At that point I really couldn’t see how all those strands could come together,’ he says, and it was joining Grimshaw Architects, at the age of 30, that he realised there was a way when he started work designing the Eden Project in Cornwall. ‘It was called biomimicry – sustainable architecture inspired by nature – and it’s when I joined Grimshaw that I first heard this word.’

Having already been familiar with nature inspired design it was learning this name that became the pivotal moment in his career and setting up his own architecture practice Exploration Architecture. Some 10 years ago he was also first introduced to the phrase biophilic design, which he incorporates into his design work, as seen with the Biomimetic Office Project, as discussed during his FX Talks presentation last May. ‘Biophilia is really a psychological perspective, which adopts the theory that because humans evolved from direct nature there’s a lot of evidence to suggest that they’re happier, healthier and more productive when in regular contact with nature,’ explains Pawlyn.

‘More and more empirical evidence is showing that is the case, in terms of recovery rates in hospital, improved learning outcomes in schools and so on.’

Biomimic, biometic and biomorphic design are known as the three strands of biological inspired design disciplines. Biomorphic design, explains Pawlyn, is ‘mimicking the shapes of nature in design mainly for symbolic effect’, by which a project can often depict a very obvious visual translation.

‘Biomimicry I see as a very functional discipline; it’s looking at how functions are being delivered in biology and then learning from that to develop innovation,’ says Pawlyn, obviously sensing something of slightly confused student in me. It can be hard to keep up with the terminology, but as a good teacher – and regular speaker on the subject – he explains that these ideas are not necessary new, just ideas which have now been given their own official terminology. ‘They all have their own validity, but we’ve definitely focused more on biomimetic and biomimicry design,’ he adds.

Biomimicry in architecture is something Pawlyn is keen to promote as a ‘functional revolution of sorts’, hence the name of his book, aiming to address the issues of resource depletion, toxins and a loss of biodiversity.

‘I’m personally convinced that more of those solutions are going to come from biomimicry than the other two strands,’ says Pawlyn. ‘But then it’s also worth being aware of biomimicry’s limitation, which isn’t specifically about people, and of course architecture has an essential human dimension to it. And that’s where biophilia comes into it; we use that a lot [particularly in the Biomimetic Office Project] to think about how we can make people as productive as possible within that space. We try to move beyond the idea of sustainable to restorative, trying to produce more energy than is consumed, making the air cleaner when coming out than going in, but also being restorative to people so that they actually feel better and healthier as a result of being in this building.’ Since being established in 2007 Exploration Architecture has developed a reputation as being a pioneer of biomimicry through delivering projects that include the Sahara Forest Project, The Fjord IT Mountain Server as well as taking on consultancy work. It adopts a radical approach to architecture and design by gathering up an expert team to ‘drill down to the basis of the challenge’ and using biomimicry to develop new solutions to familiar problems. It’s arguably not a conventional way of working as an architecture practice and could be questionable as a business model. But Pawlyn is testament that after 10 years of working in his own business that, in The Biomimetic Office Project, this is not the case.

‘As architects we do have a duty to think carefully about what we are doing and how we can make each project as a good as it can possibly be, and that does mean stretching boundaries sometimes,’ says Pawlyn. ‘Or at least stretching boundaries in the early stages of design to identify an absolute ideal and then come back to something that is achievable within normal constraints of time, technology and budget. And I think we are very practical; some people think biomimicry is a very theoretical discipline, I see it as very practical as it is based on things that work, in biology. So, although we are idealistic at the start, we are then very practical about how we implement these ideas to generate a practical solution – because unless it is buildable within time and budget constraints, it’s not going to happen.’