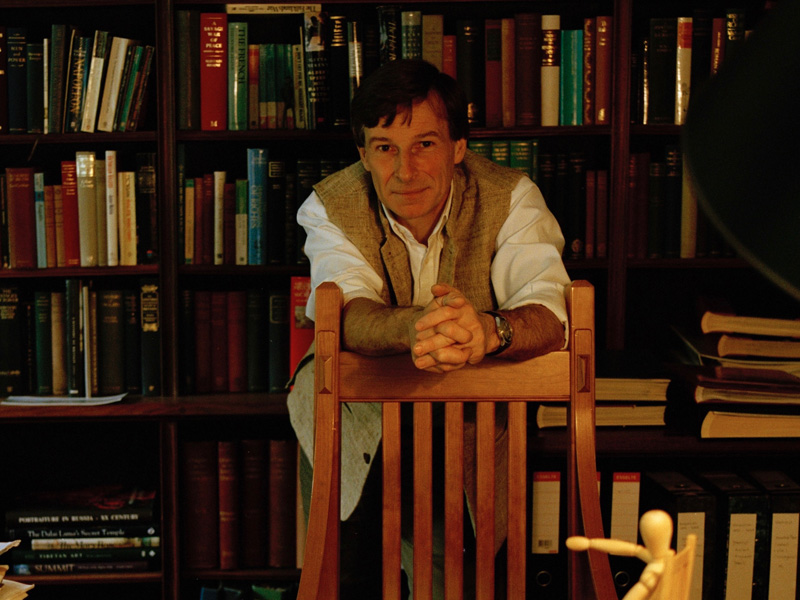 Luke Hughes, furniture designer, and founder and CEO of his eponymous studio speaks to FX about his work, his new book, and craft in the digital age

Luke Hughes’ furniture can be found across all kinds of UK institutions – including 24 cathedrals, 130 parish churches, the Tower of London, Westminster Abbey, more than 60 of the 70 Oxford and Cambridge colleges, the Law Society, the Institute of Chartered Accountants, the General Medical Council, the Royal College of Paediatricians, the Audit Commission, the Royal Institute of British Architects, the Institution of Engineering and Technology, the Bar Council, and the Supreme Court – while there are growing numbers of international projects of similar calibre.

The list of clients is vast, but there are certain commonalities: the projects tend to be large public buildings, both ancient and modern, involved in the traditions of church, state or education. Hughes’ furniture offers these clients well-made and well-considered items, designed with at least a 30 to 50-year life expectancy and with respect to the architectural history of the building and the practical and economic considerations of their present-day running. For Luke Hughes and Company’s part, the job needs to be large enough for the batch production it uses.

Hughes recounts an early method of finding these clients: ‘We had the Yellow Pages in one hand, and a copy of Pevsner [Architectural Guide] in the other. The Yellow Pages would tell us where the Royal Society or the institute of such and such was, and Pevsner would tell us whether their building was any good!’ The internet, he adds, has made this process somewhat easier today. Furniture in Architecture is the name of a new book on Hughes’ work, published by Thames & Hudson and written by design writer Aidan Walker.* A couple of quotes from Hughes explain what ‘furniture in architecture’ means: ‘In our view, furniture should embellish the space, not embarrass it’, while ‘the building is as much the client as the client is.’ At his book launch he argued that a simple, well-placed and well-proportioned piece of furniture can immediately make a building function as it should. He has cited the example of a ‘table at one end’ of what is essentially just a stone barn, albeit a rather grand one, turning it into something fundamentally different – he was talking then of the Cistercian monastery, Pontigny Abbey.

Furniture can also help a building become what it needs to be today – for example, a church can now be quickly converted to host events, thanks to pews that are stackable and easily movable on dollies, while appearing as solid as their heavy Victorian predecessors. The proposition of Luke Hughes’ furniture might seem simple, but when you consider the alternatives adopted by institutions otherwise, you can see why there is such an appetite for what Luke Hughes & Company does. An early project was the Corpus Christi College dining hall at Cambridge University, where they had polypropylene chairs within the medieval building. As Hughes explains: ‘Although polypropylene chairs are a jolly good design for the price and for the time and everything else, it was completely inappropriate for that architectural setting.’

Hughes’ furniture works for a range of settings and clients. He recounts receiving orders for Buckingham Palace and the Trades Union Congress on the same day, and working on projects with three major religious buildings simultaneously: Westminster Abbey, Westminster Cathedral and Westminster Synagogue, no less. ‘I thought, well that’s not bad for ecumenism,’ Hughes jokes. He was surprised but happy to receive the call from the Congregation Beit Simchat Torah, New York, to design the furniture for the world’s largest LGBTQ synagogue. Around 50% of the time, Hughes works with architects, amounting to between 30 and 40 a year, he hazards. Favourites include Ian Ritchie Architects, Stanton Williams, Hopkins Architects, and Allies and Morrison.

‘Working with really good architects is fun because they understand what we’re bringing to the table. They know about the building... we know about how to make sure the chairs stay together.’

He enjoys getting to know an architect’s house style and adapting the furniture to suit it. Hughes was fortunate to be introduced to architecture and craftsmanship early. When he was five years old his parents moved into this ‘incredibly beautiful, broken-down house’, and during its renovation over a couple of years the young Hughes was exposed to the work of stonemasons, carpenters, joiners, glaziers and lead workers. But just over the garden wall was a project even more enchanting for a child: the restoration of Wardour Castle. After eagerly following the craftsmen around, Hughes was bought his first tools.

A few years later, he had a summer job sweeping up in a studio shared by harpsichord maker Michael Johnson, and luthier José Romanillos. Here, he encountered all the specialist timber, precision work and fine tolerances that these specialist crafts entail. His informal education in woodwork continued with a part-time job restoring Morris Travellers, the ‘half-timbered’ estate car version of the Morris Minor, and he spent his ‘gap year’ as a carpenter’s mate in the merchant navy. Despite his obvious interest in making, Hughes felt his background – ‘good school, Oxbridge scholarship and all that’ – was leading him towards a different sort of career. ‘I didn’t really believe anyone would let me [pursue furniture making] because if you’ve been slightly overeducated, as I have been you know, your parents tend to get a bit anxious about people who go off and do things with their hands,’ he adds.

Fortunately, he hasn’t felt held back. ‘Having never gone to an art class in my life I manage reasonably well,’ he says, although he wishes he was perhaps better at drawing. He has, however, always been good with his hands, something he attributes partly to having learnt to play the cello at a young age.

Although he was skilled in the workshop and passionate about making, the designer maker model was one that he steered clear of early on, for fear of its precarity. Thirty years on, his business model is serving him well, as the company might have 100 or so projects on the go at any time. Current ones include the Folger Shakespeare Library in Washington D.C. – ‘the most magnificent building, with a combination of an art deco exterior with a pseudo-Jacobean interior’ – as well as a library for a Cambridge college and a private school hall. The subtitle of the book – and what he and Walker wanted its focus to be – is ‘Arts & Crafts in the Digital Age’. Hughes believes that the movement is very relevant to the current time: ‘It’s the connection with the architecture, the love of what you do and the understanding of materials and how to work them… The technology has changed, the economics have changed, the methods have changed, but actually the principles haven’t.’

Hughes can communicate with quick sketches, take a quick snap on his iPhone, and send it to his team in London, to a large network of workshops up and down the country, and to factories in China and the US. A recent project he is proud of is the Keystone Academy Library, Beijing, done at a speed and scale that wouldn’t have been possible with a different way of operating.

That might seem a world away from that of the Arts and Crafts movement, but Hughes feels there are similar roots. He says: ‘People like [William] Morris were describing the problem of the dehumanising effect of capitalisation in the 1870s and 1860s. What they were reacting against… it was globalisation then, and globalisation now… but we think there is hope.’

After several decades in the business, Hughes’ outlook continues to be hopeful: it is perhaps telling that rather than a monograph reflecting on an established career, Hughes and Walker wanted more of a proposition, outlining the present and future of arts and crafts in a digital age.

Hughes is excited about the possibilities of each new project and by what the workshops he uses might achieve, but most importantly wants to ensure functionality, vitality and resilience for his clients’ buildings – for many years to come.

*Correction: In the print edition of this article it stated the book was written 'with' Aidan Walker. Walker was responsible for all the writing, based on research into the Luke Hughes archive and conversation with Luke Hughes.