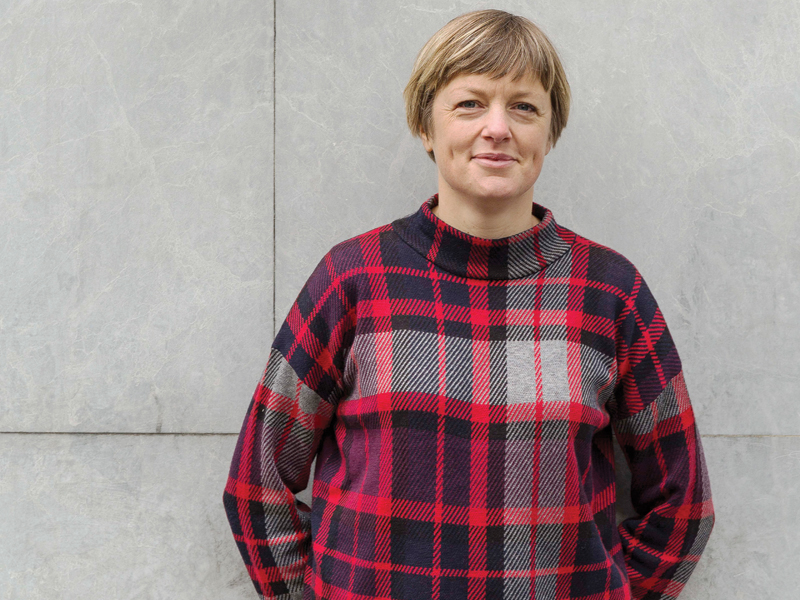 Designer Anna Hart’s love of craft and making started at school. ‘I never did art – I always did design and technology because it meant that you could actually go in the workshops,’ she says. ‘I enjoy that process of being able to go from an idea or a concept to actually seeing it created in 3D form.’

She went on to study furniture design at Leeds Metropolitan University, where she appreciated the tutorage of Paul Logan, Ab Rogers and Pam Oswin. ‘The way they set their briefs was always quite open, so you saw things outside of just making a chair or doing upholstery – it was broader than that,’ she says.

Following graduation, Hart found the job market less than straightforward. ‘If you’re studying furniture design, it’s a bit of a challenge because you don’t just walk into a job. It’s not like architecture and interiors – it’s a much smaller industry,’ she explains. She did secure a job working for furniture supplier Coexistence in a sales support role and was able to garner knowledge of the other side of the industry by going on factory visits. Through Coexistence she worked with workplace consultancy DEGW, now part of Aecom, and moved to join the firm as a project administrator. ‘I had furniture knowledge so I was able to contribute a bit more,’ she says. ‘Because I kept asking if I could do more on the projects, they created a junior designer role for me.’ Hart trained on the job and worked on projects with the Home Office, BBC and the Crown Estate.

She points out how her experience at DEGW also made her really consider spaces on a meaningful level. ‘Businesses pay a lot for space – space has to work really hard for them,’ she explains. ‘So if you design the space, you need to make sure you’re allowing all those different settings to do something for the business. You can’t just have something sitting there that looks pretty but doesn’t work for anybody and at the same time takes up expensive floor space.’ When Hart’s partner moved to Cornwall to take a cabinet-making course at Camborne College, she applied for a job with Truro-based hospitality design specialist Absolute Design. Appointed head of its interior design arm, Hart oversaw the design for Jamie Oliver’s restaurant and social enterprise Fifteen Cornwall.

While Hart’s experience was by then firmly rooted in interiors, she continued to nurture a passion for furniture. ‘I think you can have a scheme in your head, but if you fill it with a wrong product, it doesn’t work for the client and it can change the way the space looks completely,’ she says. ‘The two are very symbiotic. I still work across the two and I can’t help but always have both hats on.’

This enthusiasm for both eventually led Hart to set up her own business that she now runs with designer John Miller and that encompasses a design studio – Hart Miller Design – and the furniture manufacturing brand MARK Product.

Hart was inspired to establish her own studio due to her commitment to quality and sustainability. ‘I had a bit of conflict around the sort of industry, the level of the sector, I found myself working in, where people would be happy that chairs were only going to last them a couple of years, so they would pay less for it,’ she explains. ‘I went off travelling for a year, thinking: “Do I want to be in this industry? Is this what I want to do? It doesn’t necessarily sit well with my values as a person in the bigger picture”.’ Returning to the UK, Hart was keen to continue her life in Cornwall. She collaborated on some interior projects with former colleagues from DEGW, looking at workplace strategy. But a meeting with John Miller, then director of the School of Design at Falmouth University, inspired a new collaboration. ‘He literally had a piece of paper on his desk that was the same brief as I had in my head,’ Hart says.

That is how MARK Product was born, with a core ethos of sustainability and local design. ‘MARK as a project was the most challenging thing I have ever done,’ says Hart. ‘We launched at 100% Design in 2008, with 12 different products from a stable of eight designers, working with six or seven manufacturers – and John was still at the university. I didn’t have a life!’ she says.

But she adds: ‘It was really enjoyable, I was totally and utterly focused and loving bringing something to fruition like that – to go from it being an idea on a piece of paper to being on a stand at 100% and seeing people from established designers come up looking at our products.’

With a manufacturing background, Miller looks after the technical and engineering side, while Hart focuses on the form and function. ‘Sometimes we say I’ll design from the outside and he’ll design from the inside, so that’s where we kind of meet in terms of shaping the products,’ she adds.

While Hart and Miller’s business has received recognition by winning several awards, most recently with Hart being named the FX Awards Product Designer of the Year, in her view the biggest challenge is standing out in a competitive marketplace.

In February MARK Product launched Loops, a new product range in collaboration with design firm Studiomama. Describing it as a slightly ‘Marmite’ range, Hart emphasises the value of doing something different.

Loops began life as an upcycling project by Studiomama, using second-hand office furniture. The pieces were shown in galleries and remade for several collaborations. Hart came across Studiomama when collaborating with architects from Mandalo & White, which was tasked with designing the Mandrake Hotel in London.

The architects had seen Studiomama’s chairs and wanted these for the hotel’s restaurant, so MARK Product took on the commercial production of the Loops dining chairs. Out of this grew a collaboration with Studiomama to develop a range of tables, chairs and benches for the contract furniture market. While launching new products, Hart still continues with interior projects, in particular highlighting her experience working with Origin Coffee Roasters. The practice has also worked with Cornwall County Council, creating a workplace strategy for its offices.

Hart thinks her two focuses complement each other. ‘Practising as a design studio, we have an awareness of what it’s like to be looking for products and how important price can sometimes be, or how important an aesthetic can be,’ she says.

‘So, I know when I show the Mycroft chair to somebody what might be in their head in terms of their shopping lists, and what their priorities are. I think there’s a really good crossover and we’d like to do more of that: use our design studio to do interiors projects. Not that we necessarily want to fill them all with MARK furniture, but that we can continue to practice as designers and keep our furniture and design briefs relevant.’