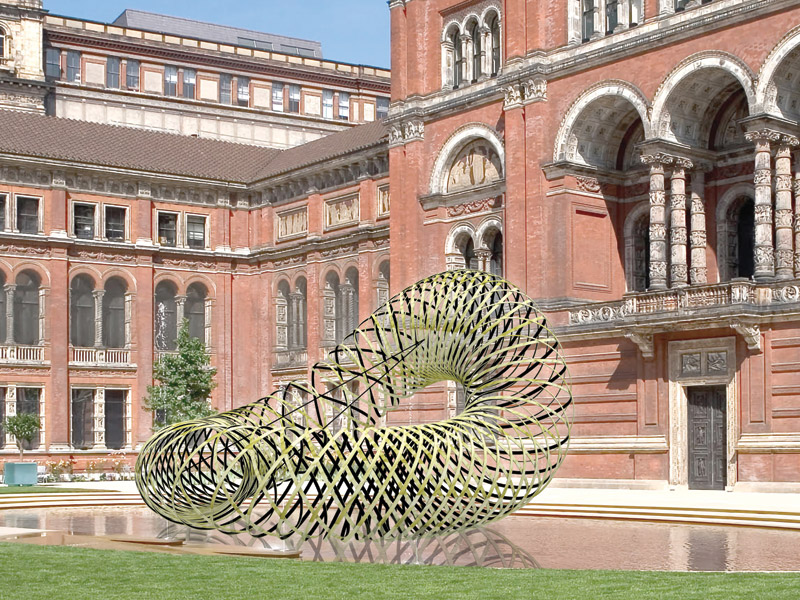 The epicentre of London Design Festival, the V&A has once again commissioned installations and special projects for the event, from Rachel Ara’s neon artwork that references the history of neon and its use in the sex trade to the hand-beaded Mardi Gras suits produced by Demond Melancon, an artist and tutor at Assemble’s Material Institute experimental fashion school in New Orleans. Here are some other highlights.

Weaving into Lightness by Kengo Kuma

Fresh from designing the museum’s latest outpost in Dundee — a monolithic, ship-like formation of concrete planks — architect Kengo Kuma has created an altogether more ephemeral structure for the prized poolside spot in the John Madejski Garden, a woven spiral of bamboo and carbon fibre that changes form when its ends are pulled. The installation shows off the strength, sustainability and flexibility of bamboo, while referencing the architect’s childhood memories of the material and its traditional use in Japan. Architect Sam Jacob — who has recently been selected to transform the V&A’s Cromwell Road entrance — has created an installation to greet visitors when they arrive: a two-way mirrored cube with an animated graphic inside inspired by a pattern by Charles and Ray Eames. The work aims to provide a moment of contemplation about the crisis of ocean plastics, highlighting the need to rethink our system of plastic production and waste. High-profile designers have been paired with cultural leaders across the capital on a series of commissions for objects to be placed permanently at their institutions — items that will be made out of red oak and fabricated at Benchmark Furniture in Berkshire. The couples include the British Film Institute’s Amanda Nevill with Sebastian Cox, the Science Museum’s Ian Blatchford with Marlène Huissoud, Whitechapel Gallery’s Iwona Blazwick with Raw Edges, Tate’s Maria Balshaw with Max Lamb, and English National Ballet’s Tamara Rojo with Martino Gamper. LDF’s new design district in King’s Cross is luring visitors with a range of big names — among them, Martino Gamper, whose Disco Carbonara installation acts as a gateway to Coal Drops Yard. Inspired by the idea of a Potemkin village, Gamper’s intervention is a false facade with traditional cladding from the Italian Alps. Granby Workshop, which came to global prominence as part of Assemble’s Turner Prize-winning project, will show a new collection of ceramic tableware made from 100% waste. Meanwhile at Central St Martins, a range of graduate projects will be displayed as part of Designing in Turbulent Times, an exhibition by its sustainable innovation programme. Ceramicist Harriet Caslin will be exhibiting at designjunction

At the heart of the new complex is designjunction (19–22 September), for which Blueprint is a partner. Now in its ninth year, it will bring together more than 200 established and emerging furniture, lighting, accessory and technology brands, as well as talks and installations, under the theme (Re)act, a call to confront the world’s current challenges head on.

Cubitt House will include brands that take inspiration from iconic moments in design history — including Friends and Founders, whose FF chairs with chromeplated steel tube structure and curved backrest reference the Bauhaus, and Verpan, which draws on the archives of Danish architect and designer Verner Panton. Nearby, the Canopy will feature consumer-orientated brands, including Spanish artist Christian Zuzunaga’s new collection of books created from waste materials from his collection of pixelated blankets, and ceramicist Harriet Caslin’s simple, tactile porcelain lighting and tableware. Also at designjunction will be the third edition of the Rado Star Prize for young designers — with nominated projects including a teaching tool to reduce anxiety in children, an experimental chair based on traditional Sussex trug-making techniques and a selection of easily repairable electrical products. The fair’s talks programme will include discussions on the circular economy, wellness in the workplace and how queer culture continues to transform the shape of our cities. Several designers have been commissioned to develop animal habitats to support the ecosystem of Brompton, believed to be home to more than 3,000 species of flora and fauna. The idea is not to make miniature versions of human homes, but to design from the animals’ perspective — Marlène Huissoud, for example, is building on her experiments with materials generated by insects to create a cocoon-like structure. Previously shown at her space in Milan, gallerist Rossana Orlandi’s agenda-setting exhibition comes to London for the first time at the Istituto Marangoni in Spitalfields. Through works by emerging designers such as Alexander Schul and Dutch collective envisions as well as big names such as Piero Lissoni, it seeks to support the reduction of plastic pollution — showing ways to process it, reuse it and return it to the production cycle. London-based artist Emily Forgot will place a colourful maze of an installation outside Shoreditch’s citizenM hotel, translating her typically flat works into three-dimensional form. The interactive and auditory installation is intended as a study of the boundaries between real, remembered and imagined spaces. Created from scaffolding planks, this large-scale installation by designer Paul Cocksedge aims to be a statement in favour of pedestrianisation, inviting people to sit, stroll and loiter in the heart of Broadgate. The Sharjah-based organisation, which seeks to empower women through craft, will launch its first product range — the Museum Line — at London Design Fair in Spitalfields. The work includes handblown glass from Palestine, woven Japanese grass tapestries and stools sand-cast in Sharjah. Makerversity, the workspace for start-up businesses at Somerset House, presents proposals by architects, technologists and designers for reimagining public space in the city, which were developed through its Civic Hack. Commissioned by the National Trust, Gitta Gschwendtner has invited five fellow designers to create seating for the 17th-century Fenton House in Hampstead. Challenging the forbidding nature of so many stately homes, the designers have designed seating that’s made to actually be used.

Hosted at sketch in Mayfair, PiM.studio, Brodie Neill, Matteo Fogale, and Studio Furthermore have created new pieces out of 5,000 pine dowels provided by Matter of Stuff that hope to demonstrate the infinite possibilities of sustainable design, upcycling and waste avoidance. Gallery Fumi in Mayfair presents new furniture pieces by Max Lamb that use the ancient Japanese urushi lacquering process and have been produced in collaboration with craftspeople in Wajima, Japan.

Find out more at londondesignfestival.com