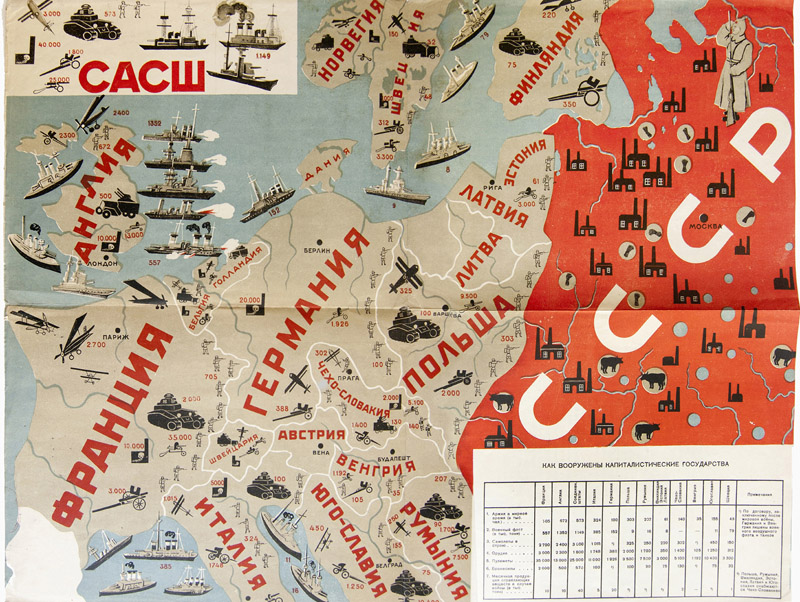 Children of the Soviet Union had a marvellous treasure trove of illustrated books at their disposal, a wonderful collection of modern art and expressive design that somehow made it past the censorious eye of the authorities. Author Philip Pullman dips into a new book that has brought many of the best examples together, and is swept away by the experience

Main picture: How the Capitalists are Armed, B Zhukov, 1931, unknown illustrator

The world of children's illustrated books in the first 20 years or so of Soviet rule is almost incomparably rich. What were they doing, these commissars and party secretaries, to allow this wonderland of modern art to grow under their very noses? I expect the rule that applied to children's books was just as deeply interiorised in the Soviet Union as it has been in the rest of the world: they don't matter. They can be ignored. They're not serious.

Above and below: The Children's International, Yuri Gralitsa, 1926, cover and illustrations by Georgy Echeistov

But if we didn't know it already, we can see from the evidence so splendidly spread out in these pages that children's books are capable of astonishing beauty and an almost unparalleled range of expressive design. With so much to look at, one's eye tries to find patterns or correspondences, to get hold of shapes that rhyme. And one that leaps out to me is that of the Jumping Jack, the old wooden toy: you pull a string and his arms and legs shoot out at either side. That shape, a sort of schematised, simplified human figure, turns up again and again (top left, p116). Its pure form occurs in the child's figure, in the children from China and (presumably) Scotland, and a Russian Young Pioneer leading the way to a brave communist future, and interestingly from behind, doing something very modern and heroic to an electricity pylon. Even the diver (page 112), in a book illustrating clothes worn by workers, takes up the same pose. The textures and colours of the plates from that book illustrated here remind me of Eric Ravilious's marvellous lithographs in his High Street of 1938, but what a world of difference in the social context!

Above and below: It's Time to Get Up, I Tsarevich, 1932, cover and R Apin photo-illustrations by F Folman and V Bonyuk

There is no cubism here, no post-impressionism, no Dada. What there is, is constructivism, and plenty of it, and of its metaphysical parent, suprematism. Basic geometrical shapes, the square, the circle, the rectangle, are everywhere; flat primary colours dominate. El Lissitzky's suprematist tale about two squares from 1922 (bottom, page 111) puts the principle to work, and Malevich's famous black circle turns up in the position of a giant full stop in Lidia Popova's cover design for Sergei Neldikhen's 9 Words of 1929 (top right, page 111).

Above and below: Let Us Take the New Rifles, A Yakobson, 1927, illustrations by Vladimir Mayakovsky

But it's not all geometrical shapes and primary colours. Some of the textures are beautifully rendered, and almost palpable: was there ever a pricklier hedgehog than this one peering around suspiciously (page 115)? And the leopard
(also page 115) looks as if it comes fresh from the brush of Brian Wildsmith. The brilliant rhythm of the flatly printed locomotives (page 114), the utterly bizarre dragon (page 116), sheep escaping across their deep red background (page 115) -- the pleasures go on and on. But nothing comes without a context, not even a black circle or a red square.

Above and below: The Journey inside the Electric Lamp, by N Bulatov and P Lopatin, 1937, photography and photomontage by
M Makhalov

We have some of the thinking behind the destruction in the book too: in Hints on Upbringing there's a real mixture of generous good sense ('Be careful of any trifle which a child considers a toy, even though it may only be a piece of wood
or a stone') with this miserable diktat: 'Never tell a child about things he cannot see. (This means that fairy stories should not be told to children)'. This, from the land of the Firebird, of Baba Yaga, of the hut on chicken legs! Or the criticism by the psychologist Lev Vygotsky (1896-1934) of the immensely popular writer of verse for children, Kornei Chukovsky: 'Chukovsky piles up nonsense on top of gibberish. Such literature only fosters silliness and foolishness in children.'

Above and below: Special Clothing, Boris Ermolenko, cover and illustrations, 1930

There is always a voice ready to say things like that, and sometimes a fist, a rifle, or a prison cell ready to back it up.
But for a few years Russian children's books were free of the darkness that descended over the Soviet Union, and the light they shed, a lovely primary-coloured geometrical wonderland-light sparkling with every conceivable kind of wit and brilliance and fantasy and fun, is here.

I Am a Printer, Konstantin Kuznetsov, 1932, cover and illustrations by Ekaterina Zonnenshtral

Inside the Rainbow, with a full introduction by Philip Pullman is published by Redstone Press and is available for order at redstone.myshopify.com