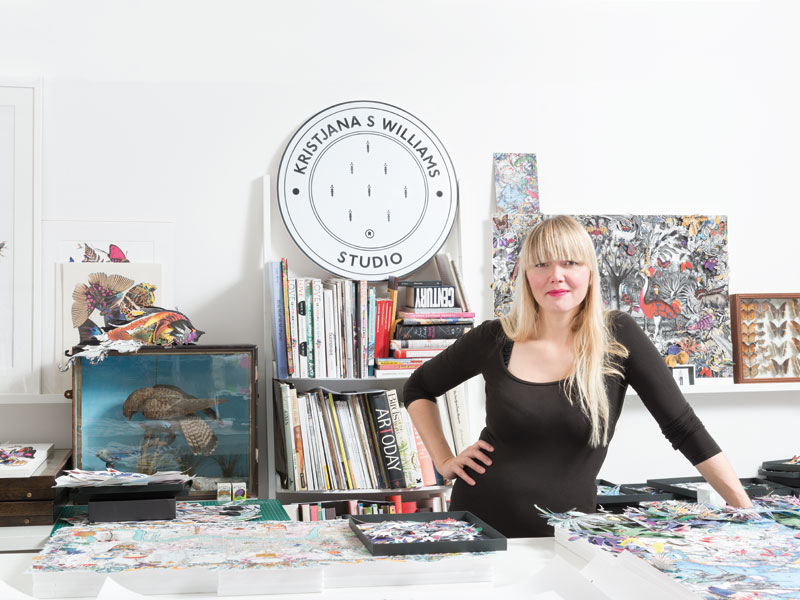 Artist Kristjana S Williams, a trained surveyor and a graduate of Central Saint Martins, has loved maps since she was a child, and now combines that love with art in a unique and vibrant translation of cartography for, among others, Osborne & Little, Sennheiser, The Connaught hotel and now the Shard.

This competition has now closed. For more information, read the Terms and Conditions.

Once upon a time, on an island quite far away, a little girl who was desperate to find the warmth, light and colour her homeland lacked, discovered an enchanted world. More prosaically, it was in a geography class in Iceland that the little girl, Kristjana Williams, found this world when she was introduced to the art of cartography. Here were all manner of exotic places literally thousands of miles away from the monochrome landscape surrounding her, and little Kristjana devoured them, poring over maps of places filled with the colourful flora and fauna she loved but couldn't experience. 'I used to draw these maps and fill them in, and that was the happiest I've ever been. I'd imagine where I would go and what I would do,' she recalls. Kort af Kornwelli, a reworking of the map of Cornwall -- part of a group show earlier this year at the POP gallery in Wadebridge

Of course many artists' work is rooted in their formative early years, but few are as inspired as this most colourful of illustrators to so emphatically work against them. Where her home country is all greyscale palette, chiaroscuro lighting and huge horizontal planes -- a very modernist, minimalist sense of the world, if you will -- Williams' work is, and always has been, the opposite. Her maps and prints are so lushly colourful, so excessive, that they feel like the visual equivalent of eating a box of rich, inventive and, crucially, hand-crafted chocolates. One-off pieces are created by layering up cut-out images taken from 18th-century engravings, ephemera and drawings

For as Williams spent hours over outlines filled in with colourful contours, rivers and cities, something else was taking shape too: a love of the maps themselves. 'Looking at the incredible craftsmanship behind them was endlessly fascinating,' she says, and judging from a studio filled with the jewel-bright colours she works with, not just on maps and globes, but on shawls, cushions, furniture and prints, it's obvious that craftsmanship continues to enthrall her just as much as exotic locations and narratives. It's this love that, in just four years since setting up the Kristjana S Williams Studio, has fuelled extraordinary collaborations and projects. With Osborne & Little, Williams has created the Modern Botanicals range of wallpapers; for underwear brand Triumph she designed a brilliant A/W 2013 campaign; with German audio company Sennheiser she collaborated on an interactive installation at Design Shanghai 2014 that took visitors on a magical journey through a spirit-filled forest; and for designjunction last year she took part in a charity project that saw her apply her bold palette of colours and natural forms to an Ercol Originals stacking chair. The process behind these pieces lies everywhere around us as we talk in her studio in west London: 3D collages made up of thousands of pieces of paper -- taken from 18th-century engravings, photographs, ephemera and drawings -- built up into rich, multilayered tapestries of extraordinary intricacy that are then turned into fine-art prints or transferred on to all manner of textiles and other surfaces. One large artwork hanging on the wall probably comprises hundreds of thousands, if not millions, of pieces of paper. The amount of work that's gone into it is staggering, and its impressive dimensions -- 5m high and 2.8m wide -- clearly reflect Williams' increasing interest in scale. In its final home on the 32nd floor of the Shard, it will be displayed as a backlit glass piece. It will sit alongside new London maps filled with delicate filigreed buildings composed of thousands-of-a-millimetre-thin paper, that looks like a beautiful Spirograph work. 'I'm so excited about it because I love the Shard,' says Williams. The Magic of Mayfair storytelling art that redefined of the 200 years of the idiosyncratic details...

'For the longest time I only drew from nature to make my collages, and it's still a huge and constant influence and inspiration -- its shapes, forms and symmetry amaze me every day. But working on this project, I've been influenced so much by the city. I love its mixture of history and architecture, from Kew Gardens to new, stark buildings set against historic palaces and cottages, and I love that it's so different to Iceland, where the visual landscape is entirely dictated by nature,' she says. Globes, created with globe-maker Grieves & Thomas, are made by applying 12 printed gores to a sphere, the same way it has been done since 1507

At the other end of the scale from the Shard work is a recent project that uses Williams' more classical natural forms, but again referencing the built environment and heritage of an iconic London building. Working with The Partners, Williams has created an artwork for The Connaught hotel in Mayfair that draws on its history, which the design group then used as the basis for 160 branded items, from 'Do not disturb' room signs to menus, umbrellas and even playing cards. 'I loved that process. I'm still very careful about picking projects that feel like a good marriage; if the right history and everything else is in place, and there's a body of research work I can delve into that will feed my imagination and creativity, that's perfect. And with The Connaught, where I spent two nights totally immersing myself in its world and history, that was definitely the case,' says Williams. She's similarly enthusiastic about a range of ceramics she's working on for Fortnum & Mason, which has led her to Stoke-on-Trent to steep herself in the process behind the range's journey from collages to finished forms.

What unites these seemingly disparate projects is Williams' love of working with talented collaborators. 'With my work the process changes depending on the form; applying, learning and bringing other considerations to each project, I have a certain vision, but then of course that develops through the relationship with the makers. That's particularly true with the ceramics, but was also true of working on the globes with master globe-maker Grieves & Thomas. I enjoy letting go of the control and sharing a problem, which is why I love working with collaborators and on interactive experiences,' she explains. 'Because it's not just my brain, it makes the work more adventurous and the process one that's constantly about learning and experiencing new things,' she adds. For someone whose work is so rooted in the physical world, Williams has always had a keen interest in interactivity and the opportunities it gives people to create their own versions of her work. 'Creating an experience is what I really love doing. I like that my work invites people in and they can have their own narrative,' she says. This is something she first did for the London Design Festival at the V&A in 2011 with the Interactive Print Journey, which mixed murals and furniture with an iPad app that let users take the print apart and create their own.

'I was warned that I shouldn't show people my own process for fear of it being copied, but I think people don't want to create what you already have, they want to create their own work. And that's exactly what happened,' she remembers.

She's currently developing an even bigger interactive idea, the intriguingly named Engraved Nordic Audio Expedition, which plays on the mythological aspects of Nordic narrative and brings in paintings, paper-cut animals, aural elements and a range of other features to create an interactive experience and soundscape that will travel through countries like a menagerie of wonder. 'In my ideal world I'd be doing things like that more because I love them, but it's very hard to make it pay,' says Williams. Still, for the time being, she's in demand for a growing number of absorbing projects that do pay, including a children's book to be published in September, a pitch with Yoo Architects for a 4m-tall wall piece in Lebanon, and a return to her roots with a map of Iceland that incorporates everything from elves and Viking ships to the flora and fauna of the country, polar bears and sea life -- 'things taken from all the stories I was told as a child,' says Williams. Maybe at some point her Engraved Nordic Audio Expedition will see the light of day, but it will have to fight things out with other wish-list projects... including architectural ones.

'I'd love to create my own building. I love the idea of having complete freedom to construct something room by room from my imagination,' she enthuses. 'My brain is going more and more three-dimensional. I've been looking at lots of paper-cut origami and construction drawings, and I would love to work with Norman Foster. I don't know why but the idea slightly gives me goose bumps. He's got such a strong, exciting vision, and people always seems to be at the heart of it. He's done everything from incredible buildings to cruise ships -- I'd like to be a part of something like that!'

The solution to London's transport problem