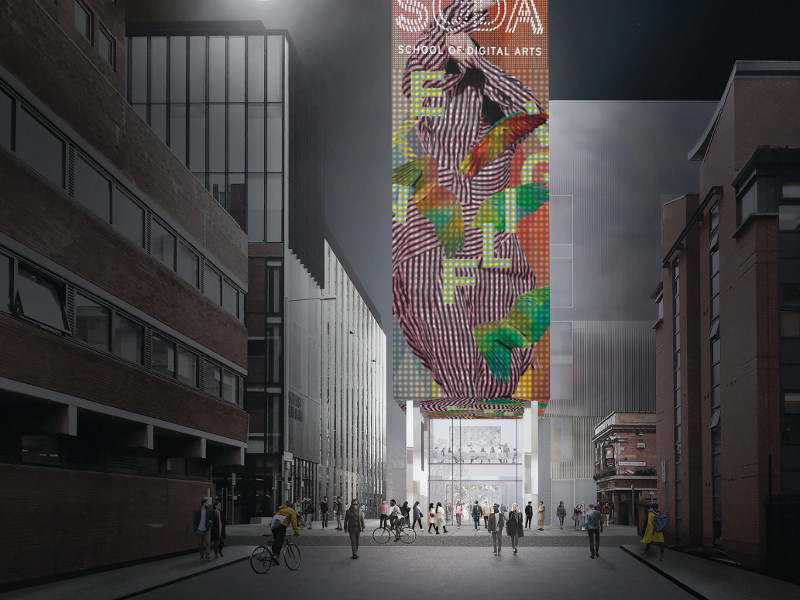 Under growing pressure to compete for students and funding in the global education marketplace, Manchester Metropolitan University (MMU) has taken an interesting step in giving over much of its recent campus expansion to one architecture practice, Feilden Clegg Bradley Studios (FCBStudios). Having established a muscular, playful, but loose-fit architectural language with its Business School (finished 2012), an extension to MMU’s Manchester School of Art (completed in 2013) and the new Students’ Union (finished 2014), the practice has now won planning for a building that is very much education 3.0 for this leading arts education establishment: the School of Digital Arts (SODA).

Set to the south of MMU’s All Saints campus, the proposed £35m, 5,600 sq m, five-storey building is all about developing interdisciplinary talent to both fuel and reflect the city’s burgeoning tech and creative industries. Its successful planning proposal suggests SODA could boost the local economy by £13m a year once it opens in 2021, providing the skills that would help establish Manchester as a hub for digital creativity of all kinds. Courses will be provided in film, animation, applied games, special effects, sound design, software design and UX design for 1,000 students per year. Supported by grant funding from the Greater Manchester Combined Authority, SODA’s industry advisory board includes local cultural providers HOME, Red Production Company, BBC and ITV, and film director Danny Boyle; all will be engaged in supporting the curriculum as well as looking to offer employment to its graduates.

The structure and programme are designed to be able to respond to changes in technology and teaching requirements. Comprising flexible, free-spanning floors, the building can be reconfigured as this relatively youthful field evolves. A double-height digital entrance hall on the ground floor provides a window that engages with the street, revealing informal breakout space, cafe, foyer, and nearby screening rooms and exhibition space. Other facilities include a digital innovation lab, open workspaces, green screens, edit suites, a media gallery, sound and music studios and production studios.

Black box studio spaces are stacked on top of each other at the western end of the building — in tune with the requirement to minimise windows on that side of the building, which overlooks the Students’ Union. Primary circulation routes are at the street-facing edge, while general teaching spaces are clustered around the core, village-green style, and visible from the pedestrian areas around the building, expressing its interior life.

The massing is conceived as a single volume but large expanses of blank facade are broken up with a mixture of flat metal and pleated metal panels and curtain wall. The finishes will vary so that a texture of reflective, semi-reflective, semi-gloss and satin panels will provide a ‘rich facade that will allow the building to be read as one’, says Simon Doody, partner at FCBStudios. A digital media display will animate the ‘nose’ that projects at first-floor level, to the north of the building, adjacent to a historic, two-storey pub called The Salutation which now forms part of the Students’ Union facilities, providing an additional element of covered public space at this lively intersection. Working to tight budgets means ‘we’ve been very careful to do everything right on this to make sure that none of the facilities is compromised by value engineering at a later stage,’ says Doody. ‘SODA is meant to be an industry-facing facility, with visits from global companies who will come in to give talks, and offer recruitment opportunities. So there are spaces here that external industry people can use for meetings and exhibitions.’

A light wall will animate the northern facade, displaying in high resolution the letters SODA on the fifth floor, as well as other high-resolution content (with the potential for students to display their own work). There will be a permanent, low-resolution light display beneath it, created by LEDs installed behind a black metal rainscreen.

High-quality public realm will enhance the street between SODA and the School of Art’s Benzie Building, creating an attractive outdoor environment close to the Students’ Union for all to enjoy, with stone benches designed into the hard landscaping, along with irrigated, integrated planting. There are options to turn this street into additional performance or screening space, by putting a temporary covering over the open space between the buildings. The scheme aims to add to the enhancements planned across the whole All Saints campus, improving pedestrian and cycle connectivity.