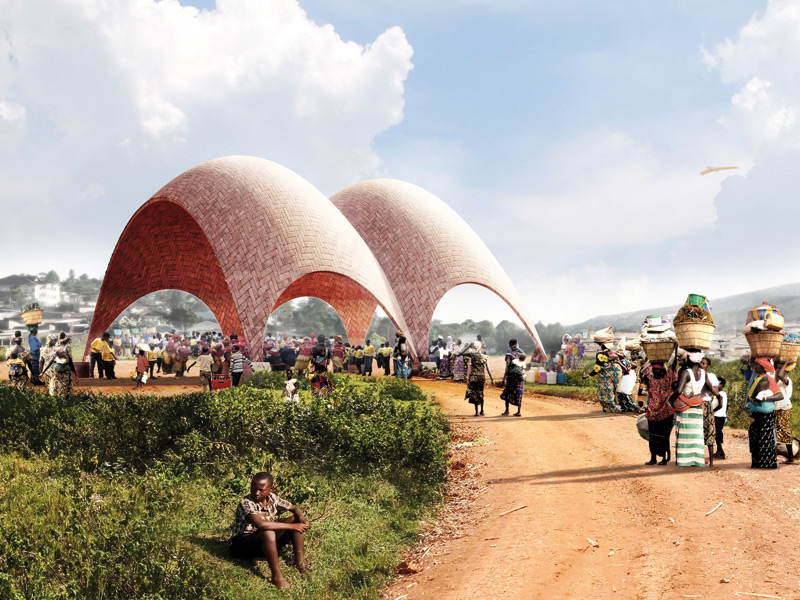 Foster + Partners’ Droneport project proposes to use cargo drone routes to deliver urgent supplies to remote areas in Africa. Each Droneport is imagined as a kit of parts that can be easily assembled by the local community. The pilot project in Rwanda comprises three buildings, due to begin in 2016 and completed by 2020. Cate St Hill spoke to lead architect Narinder Sagoo about this ambitious project.

How did the Droneport project come about?
There's an ongoing conversation within the practice on how we should address the way countries across the world are developing and how we can make the biggest global difference with our future vision for infrastructure and architecture. For this project, we were approached by Jonathan Ledgard, who has lived in Africa for most of his life and now runs a unit called Afrotech at EPFL University in Switzerland. He said to Norman Foster: 'You've designed the largest airport in the world, but how about designing the smallest?' In a way, the Droneport is a natural evolution of some of our projects, from the redevelopment of slums in Dharavi in India and a prototype school in Sierra Leone to revolutionary airport designs, such as Stansted, Hong Kong and Mexico.

Africa's population is currently about 1.1bn, which is set to double by 2050, and the continent continues to lag behind the rest of the world in terms of infrastructure. At the present moment, Africa has a $52bn shortfall in infrastructure investment alone. The project is really designed to leapfrog these obstacles and use the sky to make an immediate life-saving impact in not just Rwanda, but the whole of Africa.

How can drone technology be used to deliver supplies to these remote areas in Africa?
Drone technology is evolving so quickly... the architecture has to be flexible enough to evolve alongside that. We're creating an aerial network that will be 12 times faster than road-based travel, without the obstacles of difficult terrain or, in some places, a complete lack of roads. Only a third of Africans living in rural areas are within 2km of an all-season road. With this project, the sky becomes the new building plane. Explain the idea behind the 'kit-of-parts' structure of the Droneports.
We have come up with a structure that is highly flexible and can adapt and change. We want the Droneports to be very 'resource-lite' and to use what is locally available to construct the buildings. Like at Mexico airport where the structural system is a showcase for Mexican innovation, we want to do more with less. It also connects to our lunar project, where we're using the moon's natural dust and soil mixed with a few chemicals to create 3D-printed modules for habitation. With the Droneport, we want to use the local soil to create bricks, while delivering only the basic formwork. The formwork could be made out of timber or tough plastic that locks together to form the basic structure. These brick vaults have large spans and form flexible spaces underneath. We can connect those vaults together to modulate the building as per the demands of the site.

The legacy of the building is incredibly important to us, we want to use as much local labour as we possibly can and teach the community how to build better. We want to leave behind the maximum amount of building knowledge every time we build a Droneport.

Tell us a bit more about the pilot project in Rwanda.
In Africa, there are 450,000 deaths every year from malaria, and sickle cell disease kills about a further 100,000 a year, mostly due to a shortage of blood for treatment. Rwanda is one of Africa's most densely populated countries, with some of the roughest terrain - we can really test the Droneport here.

The drones themselves have a 50km distance range, so they can cover 100km on their battery. The idea is to build one Droneport by the end of 2016, and by 2020 we plan on building a further two Droneports 100km away from the first, one in the north and one in the south. With three buildings, we will have covered about 44 per cent of Rwanda's population, which if you took the figures of sickle cell disease alone - it's a disease that around 12-15 per cent of Rwanda's population is afflicted by - we could be saving approximately 750,000 lives each year with just three buildings. For the Droneport project open vaults of brick made from local soil are proposed. Photo: Foster + Partners

Roughly 70 per cent of each building will be for drone-related activities and the remaining 30 per cent will house community functions. It is key for us to make the Droneports not only little airports but also community hubs. The buildings need a civic presence, and they'll have blood banks and clinics, a post office and a shaded community space, maybe even a market - they'll become really energetic places, emblematic forms on the periphery of cities.

What impact do you think the Droneport project will have on African communities?
We're doing this because we want to save lives and make an impact immediately. We imagine by 2050 there will be hundreds of Droneports across Africa, transforming Africa as a continent by saving thousands of lives.