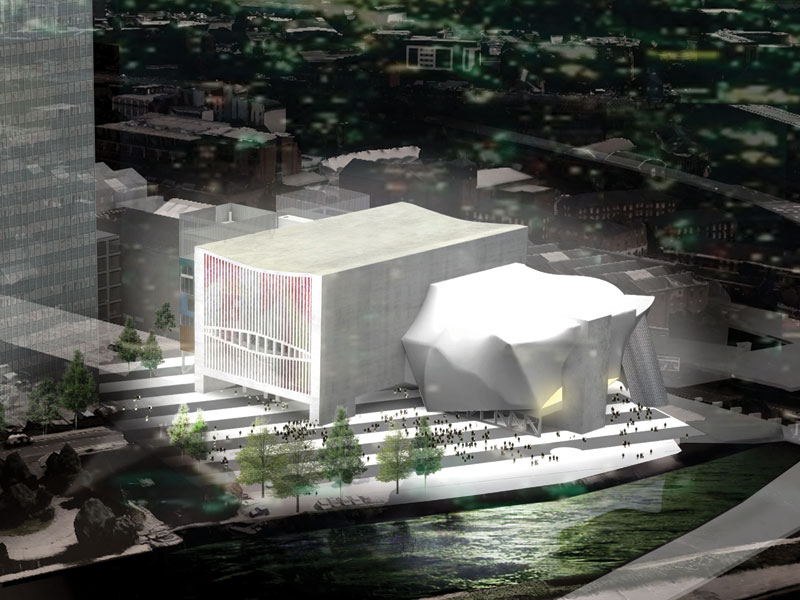 OMA’s Manchester-based arts venue, Factory, is set to be a major new cultural hub for the North and the key to local regeneration

Factory is being hailed as the new flagship cultural venue for the North. Due to start on site soon, it is OMA’s first major public building in the UK, forming part of Manchester’s new St John’s neighbourhood on the site of the former Granada TV Studios. It is being developed by Allied London in partnership with Manchester City Council. The £110m building will be operated by Manchester International Festival, offering audiences a broad, year-round programme of dance, theatre, music, opera and visual arts in the building’s huge, flexible spaces. Ellen van Loon, OMA partner in charge of the project, spoke to Blueprint about Factory and the role it will play in Manchester’s thriving cultural scene.

What was the initial inspiration for Factory, and how did you develop the form of the building?
The initial inspiration for the design was that performance spaces need to be designed for maximum freedom. The idea was to actually create a large space that is completely multifunctional and you could say almost oversized, so you can do anything with it. When visiting the building you can experience a totally contemporary piece of music, art or performance, but at the same time you can also take in a more classical theatre experience — that’s why the design is a big box, in combination with a more traditional theatre shape. By combining the two volumes you can make very large pieces with dramatic stage performances, where the big box is the whole stage and back stage for the theatre.

How does the building relate to its surroundings in the new St John’s neighbourhood?
The location is a former industrial site, which is quite complicated. First of all we have a huge level difference because we have the old Pineapple train line level that’s actually 6m above ground. We also have a major road, Water Street, which is for the whole new development area, and there is the river.

The ground-level is the entrance for the building, facing Festival Square, and then the whole performance box is moved to the level of the Pineapple line, facing on one side the Museum of Science and Industry, and on the other new residential towers to be built. In the theatre is a huge window where you can look out on to the river, and the whole ground floor is connected to an urban space.

The level difference is something of a barrier in the city but because the building is connecting both, as a pedestrian you can enter the building, go through it and overcome all the different urban levels around it — the building is almost a kind of connector. Traditionally theatres are normally closed unless there is a performance, but the idea is that this building is always open — it becomes a piece of the city where you can wander through, even if you’re not going to a performance. Ellen van Loon, OMA partner in charge of the project

Were you inspired by Manchester’s rich cultural scene?
The most interesting culture pieces are always produced in abandoned industrial areas, not just in Manchester but elsewhere in major cities too. And of course Manchester, because it has quite a lot of redundant buildings and is relatively cheap compared to London, automatically created a good foundation to enable this kind of cultural development. It was very important with Factory that we kept that feel of the history of Manchester and the abandoned industrial areas. We tried to translate that into our architecture; it’s more warehouse-type architecture.

How will Factory complement other cultural institutions, such as HOME, in Manchester?
The scale of the spaces we’re providing at Factory are much, much larger and more flexible than at HOME. In the new Factory building, you can basically make an art piece of 30m x 40m, and still enable the public to go around. But I don’t see the Factory building as a standalone — it’s more an addition to the existing programming in Manchester. The only difference is that the Manchester International Festival has a building of its own but, as with this year’s event, it will still use other buildings across the city. Then I think it becomes interesting because with the addition of Factory, there would be a much more complete schedule of spaces that enable any type of performance.

How is the project progressing? What stage are you at?
We’re excited: we have planning approval and are getting prepared to start construction.