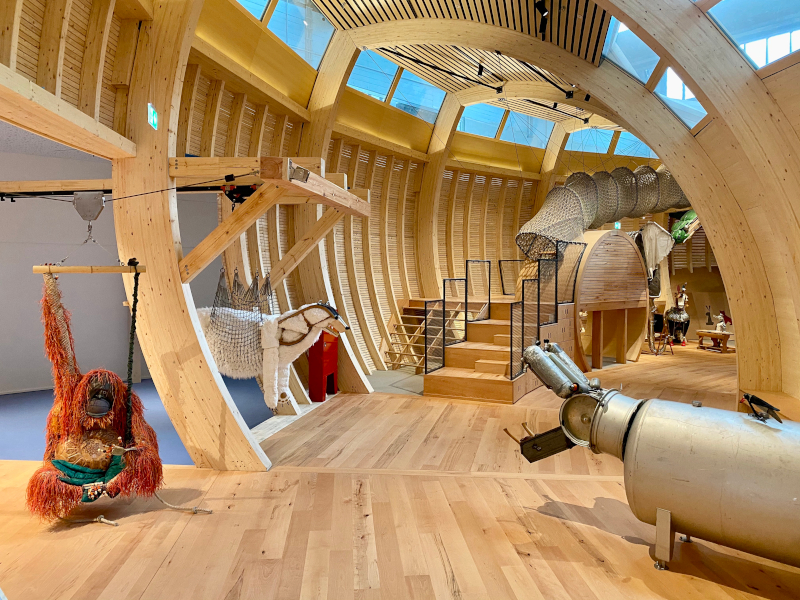 The new museum for younger visitors takes the form of a wooden ark, telling an ancient story with a timeless message

THE JEWISH MUSEUM BERLIN set up an international design competition in 2016, asking for a museum experience that would engage its younger visitors, in contrast with much of its other, emotionally heavy material. From 100 entries, Seattle-based architecture practice Olson Kundig was appointed.

Olson Kundig’s winning concept was inspired by the flood narrative: not just that of Noah’s Ark, but of hundreds of other flood myths from cultures around the world. The practice’s proposal intended a modern reinterpretation of this timeless story of new beginnings, imbued with a sense of welcoming and acceptance; in turn, Olson Kundig explained, this was inspired by Germany’s acceptance of nearly one million refugees at the time.

The ANOHA experience takes the form of a wooden ark: not at sea, but sat within a much larger 1960s-era flower market hall. The ark has a circular form, which might take visitors by surprise; it was inspired by a story on an ancient Sumerian tablet that predates the Torah by a thousand years, but was only translated in the past decade. Contrasted with this ancient reference, the design team at Olson Kundig found a more recent one, in the striking Space Station V from Stanley Kubrick’s film 2001: A Space Odyssey. 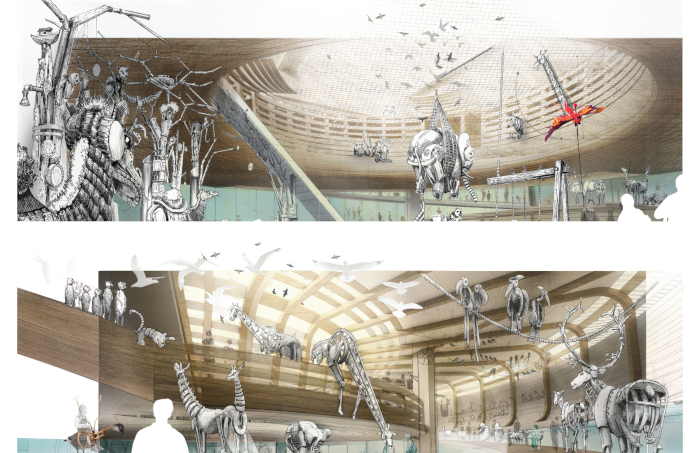 This circular form was in fact more apt for the non-linear museum journey Olson Kundig wanted to create. ‘A traditional ark is directional, with a distinct front and back and a rudder to guide exploration. The circular modern ark has no back or front; instead it is democratic and unbiased,’ explains Alan Maskin, design principal at Olson Kundig.

The need for a modern ark seems worryingly close, as the practice points out, with the rising sea levels and extreme weather patterns brought about by climate change – even as I write this, there are devastating floods in New York, New Jersey and Louisiana in the US, Maharashtra in India, and Catalonia in Spain – set only to worsen in the coming years. 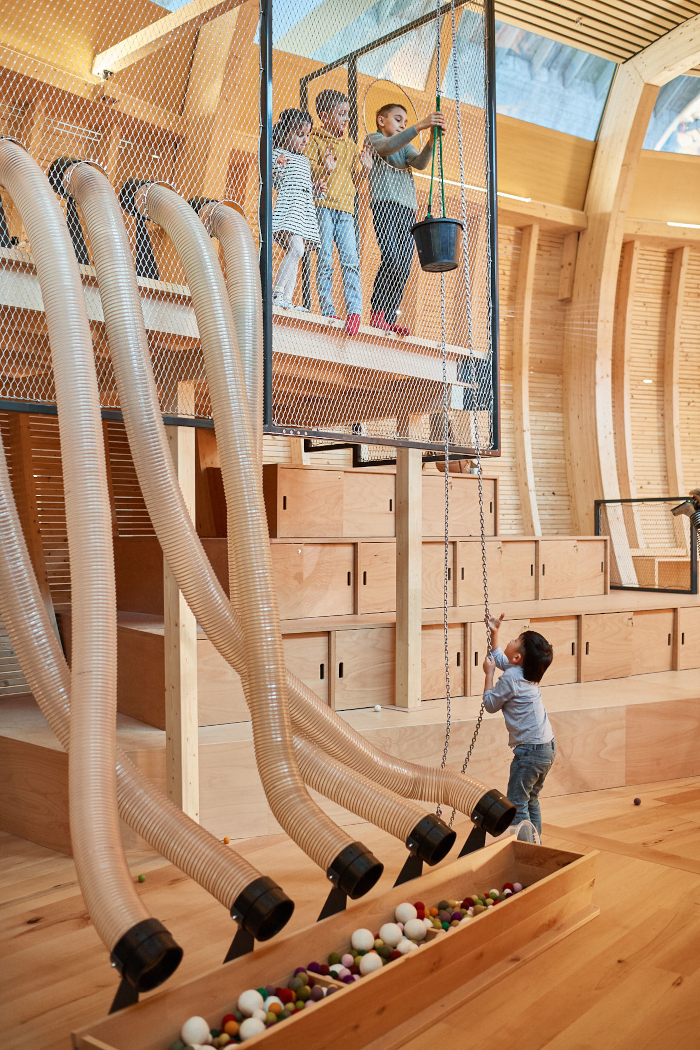 Sustainability was therefore of great importance to the project, and the architects worked with climate engineers Transolar to ensure that building performance was built into the design. The structure within the structure, the ark’s warm wood forming a material contrast to the hall’s concrete, is an impressive sight, but also offers opportunities for a sustainable approach. The shell of the building is retained, along with its embodied carbon, and it enables mechanical systems to be eliminated thanks to its functioning as an environmental buffer, with its unheated concrete space acting as an insulating outer layer for the ark.

The market hall’s clerestory skylights have operable louvres for ventilation, controlled by sensors that monitor temperature and air quality. Ceiling fans and opening windows facilitate active air movement between the ark and hall. For daylight, the hall’s roof forms and north-facing skylights make for a well-lit interior, as do the ark’s own windows, which also provide visual connection to the hall from inside. 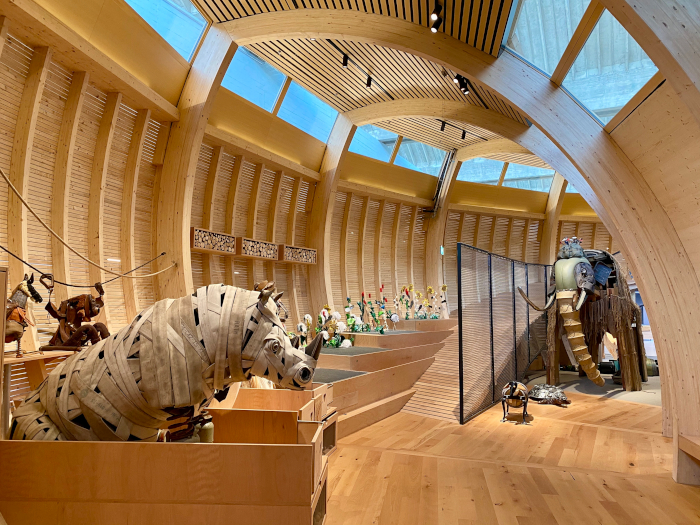 The crux of the experience, however, is how it engages children. Introducing the practice’s approach, Maskin explained: ‘We designed ANOHA through the lens of a child’s experience, allowing them to engage with important cultural issues in creative, age-appropriate ways.’ A children’s advisory council was even set up for the project, composed of 20 children aged between six and 12 that met monthly between March 2017 and May 2020. This allowed for a comprehensive consideration of all elements, including the development and testing of activities and workshops, and even deciding the project’s final name. ANOHA is a shortening of the original name, ‘Arche Noah’, to how a child might say it, and easier to pronounce for those of all ages and nationalities.

Meanwhile other aspects of the design were influenced by one of Olson Kundig’s much earlier projects, Noah’s Ark at the Skirball Cultural Center in Los Angeles, which opened in 2007. It is perhaps unusual to return to such an early project, but Maskin is clear in his debt to that experience: ‘I will always be grateful to the Skirball Cultural Center – who taught me almost everything I know about designing for children and museums – for their extreme generosity of spirit in sharing their ideas and their values with the Jewish Museum Berlin. The ideas that originated at the Skirball are now being extended to children around the world, including the diverse communities and recently immigrated families that visit the Jewish Museum Berlin.’ 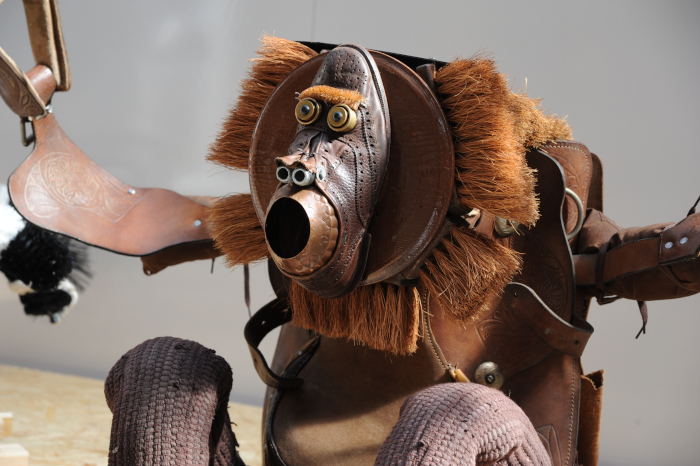 As with the Skirball and its own community, this project is designed to bring different visitors together in play. Not only are exhibits suitable for visitors of different ages and abilities (including adults), but equally those of different religious and ethnic backgrounds, who make up the diverse community around the museum’s Kreuzberg location.

The ark’s animals are the focus for the activities offered by the experience. There are 150 sculptural, handcrafted animals, their stimulating tactile forms created by artists from found objects and familiar household items, which visitors can also try their hand at making through classes in the museum’s programming. Around these animals, different areas of the ark evoke specific animal habitats, while the activities play at feeding and grooming the animals, cleaning up after them and using their waste for compost – tying into the Jewish tradition of tikkun olam or ‘world repair’ – by establishing a sense of stewardship for the natural world and other people. The lessons of the flood narrative, given countless times over the years, seem, in Olson Kundig’s latest and more expansive exploration of the theme, to be as relevant to Berlin’s audience in 2021 as they were to the Skirball in 2007.