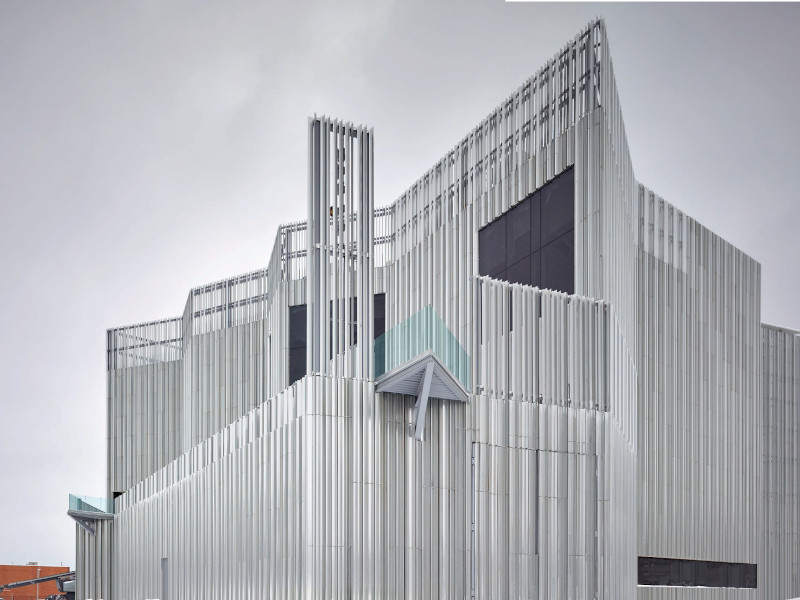 New arts centre Oklahoma Contemporary, designed by Rand Elliott Architects, provides Oklahoma City with galleries, performance spaces and studios to support a growing local creative scene. But the building’s defining feature is its aluminium skin, which reflects the ever-changing sky of a state known for its extreme weather

World-renowned Oklahoma City native and humorist Will Rogers once famously said: ‘If you don’t like the weather in Oklahoma, wait a minute and it’ll change.’ Indeed, big skies and volatile weather are the essence of Oklahoma City. Equidistant from Los Angeles and New York, Oklahoma City does not have the pedigree of either coastal cities, but with its near-iconic prairies and Native American heritage — plus a cultural scene long on the rise — it is a city with as much history as it has potential. This building lies at the heart of a new $26m (£20m), purpose-built campus designed by Elliott that stretches across 1.9ha and includes a sculpture garden, the existing Campbell Art Park, plus a renovated 1910 warehouse, now named The Studios, which houses crafts studios both for local artists and participants in Oklahoma Contemporary’s Studio School arts education programmes.

Launching officially in March, the Oklahoma Contemporary marks the second chapter in the arts centre’s history. The formerly named City Arts Center was founded as a non-profit, community-orientated arts centre in 1989, funded by a capital campaign. It used to operate out of a 1950s building in the city’s State Fair Park, which, until 2002, was also home to the Oklahoma City Museum of Art. Over the years, however, the Arts Center outgrew its existing facilities, which also housed a planetarium. It needed a bigger, better space for its programming needs — and a more central location to engage with the community. Unlike the Oklahoma City Museum of Art, the Oklahoma Contemporary is a non-collecting museum. Aside from the rotating exhibitions, this suggests a building in constant flux — starting with the new ever-shifting facade.

Designed to reflect the dynamic Oklahoma weather, the facade wraps around the irregular outline of the building and consists of nine variations of custom-fabricated aluminium fins that are angled randomly so they can catch the light and cast different shadows on themselves. ‘This building is alive, and it fits this place in the sense that it is ever changing,’ says Elliott as we walk round the project. ‘And we really felt like that is Oklahoma Contemporary. It is artists, it is people seeking to solve problems and to create things.’ It’s when the weather shifts and the sunlight interacts with the angled aluminium fins that the building comes ‘alive’, shimmering in the urban landscape. Image credit: Scott Mcdonald / Gray City Studios

Part rain screen, part brise-soleil, the facade is constructed from bright-dipped aluminium fins, each 3m long, that have been recycled from aluminium billets, then extruded. At first glance, all this metal looks cold and bleak. When I think of Oklahoma City, I think of sprawling prairies and natural habitats; in that respect, the aluminium feels out of place. But soon enough, the sunlight starts to shift along the fins and the material proves itself as a reflective canvas for, and embodiment of, Oklahoma City’s ever-changing weather.

At the corner of the building, the facade thins down to 50% of its fins. Here, the building ends, but the screen juts out to form what has been dubbed The Lantern. Triangular in plan view, this hollowed space is lit up from within, giving it a lantern-like quality designed to capture the attention of visitors — particularly those approaching on four wheels. The facade is constructed from bright-dipped aluminium fins, each 3m long, that have been recycled from aluminium billets, then extruded. Image credit: Scott Mcdonald / Gray City Studios

From here on, the visitor journey is about discovery. Instead of locating the entrance at the front, Elliott has hidden it at the back, next to the car park — a rather fitting approach in a city as car-centric as Oklahoma City. ‘By putting the entrance at the rear, you have to seek it,’ he says. And where the entrance could’ve been, there is a loading dock. ‘There are some very practical things that happen with buildings like this. And what we chose to do was to share those things that are part of what makes the building,’ he adds. ‘You can either try to hide that kind of thing or you can embrace it, and this is an arts and cultural centre. This is about education.’ In many respects, Rand Elliott’s building is a testament to honest architecture. The ground-floor lobby includes a visitor experience area, shop, cafe and a community lounge. It can also be used as a gallery space. Image credit: Scott Mcdonald / Gray City Studios

The loading dock is an example of that, but honesty permeates inside, too. The light-filled lobby features a cafe and retail space — amenities that the museum didn’t have in its past location. The classroom studios, located on the ground floor, are all dressed in an unpretentious white and, in an effort to educate students about arts but also the built environment, the mechanical features on the ceilings are not only left exposed but also highlighted with up-down LED lighting. Floors are polished concrete. The wood panelling in the centre’s cafe expresses a similar verticality to the aluminium fins outside. Image credit: Scott Mcdonald / Gray City Studios

In these learning environments, much like throughout the building, a simple, white acoustic ceiling helps muffle the noise without all the bells and whistles of luxurious baffles. ‘This is not a high-end kind of thing, it’s an art centre,’ says Elliott. ‘We feel that the effort that goes into it is really about the experience and the meaning that’s in it. It’s not about marble and granite.’ And in a city rich with cowboy culture and Native American heritage, the lack of expensive marble makes complete sense. With its humble materials and transparent approach, the Oklahoma Contemporary presents itself as a grounded building where sensibility and poetics go hand in hand. A fine example of that relationship is the white-steel stringer stair that connects all floors of the building. Elevating what could have been a utilitarian stairwell is a vertical display of LED tubes — designed by Elliott — that is vaguely reminiscent of Dan Flavin’s neon work, but more muffled in its glow. Designed around a triangular void, the stair takes on a sculptural characteristic that acts as a palate cleanser for the visitor between floors. The first floor opens into a 557 sq m gallery space. This is where the inaugural exhibition will be held once the centre officially opens. Titled Bright Golden Haze (after the first line in the iconic musical Oklahoma!, in which a cowboy sings about the morning light at the dawn of Oklahoma’s statehood), the exhibition was designed in collaboration with Los Angeles architect Chu + Gooding and brings together works from a wide range of contemporary artists who are exploring the use of light. The Studios can be used by local artists and for classes forming part of the centre’s educational programme. Image credit: Scott Mcdonald / Gray City Studios

Eschewing 90-degree angles, Elliott has replicated the building’s jagged exterior inside. The purpose of that is three-fold: the irregular space within creates a visual link with the outside, it symbolises a break from the white box paradigm of many art museums, and it provides a flexible space, with varying wall widths, for artists and curators to play with.In the spirit of flexibility, one corner of this gallery will be walled-off for a specially commissioned version of artist Leo Villareal’s Star Ceiling, while the rest will be segmented with plywood and sheetrock walls that are mounted on wheels. And if visitors want further information about any of the art on display, they can wander into the Learning Gallery next door, where they can engage in activities inspired by and related to exhibitions. The Lantern, a four-storey vertical element triangular in plan, is lit up from within, illuminating the building at night. Image credit: Scott Mcdonald / Gray City Studios

‘Learning is a core part of our mission,’ says Oklahoma Contemporary artistic director, Jeremiah Matthew Davis. ‘We believe in creating multiple access points for art, so we can meet people where they are. And for those who are really interested, they could spend hours here reading, doing activities, really connecting with the art.’ Adjacent to the gallery are a digital photography and digital media lab studios, as well as a conference room that opens on to a terrace 5.5m above ground. A bit like at the Whitney Museum of American Art in New York, this pocket of outdoor space will be open to the public, who can marvel at one of British poet-artist Robert Montgomery’s billboardsized light poems, which will be installed in the garden below during the show. Upstairs, the building counts a flexible theatre, complete with wood sprung flooring and a catwalk system that provide easy access for stage crews to suspend and maintain lighting instruments. This will have neither fixed seating nor a fixed stagehouse, to allow for a variety of different configurations such as artists’ talks, film screenings or even dance parties. And if events are fully booked, the dance studio next door can act as a spillover space where screenings can be shown. ‘The building itself has been purposely designed with a mission in mind,’ says Davis. ‘It’s an architectural expression of the vision for the organisation.’ This architectural expression is perhaps best portrayed back down in the entrance. A sculptural plane that extends out over a poured concrete path, a plaster entrance canopy rests on a quartet of steel columns, one of which doesn’t quite touch the canopy — a nod to the idea of ‘art always reaching further’, Elliott says. ‘That is one of those little symbolic gestures,’ he adds, ‘about what the arts allow you to do or encourage you to do which is to reach maybe beyond what you might normally imagine.’

This article was originally published in Blueprint issue 369. You can buy a copy here, or subscribe to Blueprint