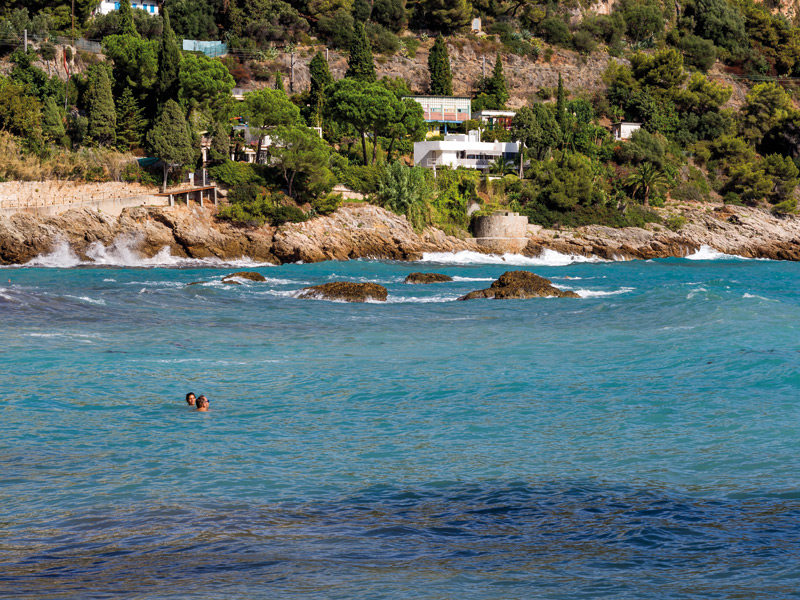 Modernist furniture designer, architect and painter Eileen Gray was long overlooked, but her recently restored E-1027 house on the Côte d’Azur drove Le Corbusier to impetuous acts of jealousy. Now open to the public, the house forms part of a new Modernist Mecca called Cap Moderne that also includes Corb’s Le Cabanon. Yet E-1027 is undoubtedly the star of the show, as is Gray - back in the spotlight with a new film, exhibition and book out this year

Most renowned female architects and designers of the early 20th century were overshadowed by their more famous husbands - Ray Eames, Lucienne Day, Aino Aalto, to name a few. Not Eileen Gray - a shy, modest character, timid, private and bisexual, she was overshadowed by the domineering, larger-than-life character of Le Corbusier, both in life and death. The living space of E-1027 before Le Corbusier made his mark with a series of murals. Image: Aram Designs

In 1938, he daubed seven great, big murals on the walls of her white modernist masterpiece, E-1027, in Roquebrune Cap Martin on the French Côte d'Azur - an act of vandalism in Gray's eyes. Later he built his Le Cabanon and five holiday cottages on the same secluded site, and finally drowned (albeit by accident of a heart attack) right in front of the craggy rocks E-1027 perches on, ensuring that his name and memory would be forever etched onto her grand project. The living space today, partially restored and open to the public

'Le Corbusier was so jealous of her,' says the godfather of Gray's furniture, Zeev Aram, who was granted the worldwide rights to reproduce her designs in 1973, three years before her death at the age of 98. 'Never mind what anyone else tells you, that's what she told me. She went to Paris and when she came back she found four murals on the walls of E-1027. She was stunned, you can imagine, you've built your dream love house. The open-plan or 'la grande pièce' as Gray liked to call it. The round blue wall provides a buffer from the entrance into the space

Le Corbusier was so jealous of her, he wanted to put his stamp on it. The moment he saw the house, that a woman could do better than him, it was just not possible for him to digest. He painted the murals not so much to ruin it but told her, "I thought you needed some colour in the room."' The murals, audacious and brightly coloured, with distorted depictions of intertwined naked women, bring to mind the work of Picasso. One greets visitors at the entrance, there are two in the main living space, one above the desk in the second bedroom and a sgraffito etched into the walls on the building's lower level - their bold, brutal character at odds with the calm, harmonious surroundings Gray so cleverly devised. They even prompted painter Fernand Léger, who lived in nearby Antibes, to comment to Le Corbusier: 'Don't you think you might have overdone it a bit?'

While Gray abandoned E-1027 and retreated into obscurity, her designs forgotten until the late 1970s, the house fell into disrepair and scandal. One subsequent owner was murdered in one of the bedrooms during a robbery in 1996, later it was squatted and graffitied. From 2000, the town of Roquebrune Cap Martin looked after the site and it was designated a historic monument. Now, following several clumsy attempts at restoration, E-1027 has been partially restored (over a period of nine months) and forms part of Cap Moderne, a 2970 sq m site owned by the coastal protection agency, the Conservatoire du littoral, and open to the public since May. While there is more work to be done on E-1027's structure (estimated to cost another €1m, half of which will come from the Ministry of Culture), over the next four years there are plans for new exhibition spaces, an auditorium, visitor centre and library for study and research, 'an educational laboratory to help students and architects understand the beginnings of the modern movement', says Michael Likierman, chair of the Cap Moderne association, which took over the running of the site and restoration of E-1027 in 2014. Nautical fabric awnings protect the balcony from the elements

The murals now are just part of the story, E-1027 the shining jewel in this modernist mecca. Eileen Gray is no longer forgotten either - this year sees a film, The Price of Desire, by Irish director Mary McGuckian, staring Orla Brady as Gray and Alanis Morissette as her lover Marisa Damia and partially set at the restored E-1027; a documentary of her life and work entitled Gray Matters; an exhibition of rare private paintings and photographs at London's Osborne Samuel gallery and a book published by Lund Humphries. 'She was 93 when I met her,' says Aram, who is also on the board of the Cap Moderne association. 'She was forgotten... she was really forgotten! Not as a human being, but as an architect and designer. Everybody else who was her contemporary went ahead and she just sat quietly in her little apartment in Rue Bonaparte. A window without shutters is an eye without brows,' said Gray

She developed almost a reticence at being exposed because it could lead to disappointment. Apparently the first question she asked when she heard I was interested in her work was "Is he serious?" I didn't need any conviction, I asked friends, architects, designers, tell me about Eileen Gray - most of them sucked their teeth. I pride myself on having brought her things, in a modest way, to the attention of the world. I do take credit, not because I'm an exceptional person, but because Eileen Gray deserved it and, thank god, she is arriving at the state where she should have been many years ago. A person like that you don't just put on file or put in the archives.' Gray liked to sit in this hammock looking out to sea

Born in Ireland in 1878 to an aristocratic family, Gray moved to London to study at the Slade School of Art and then escaped to the artistic freedom of Paris in 1902, which would remain her base until her death in 1976. She learnt the art of Japanese lacquer work under Seiko Sugawara and began producing art-deco furniture for wealthy clients and famous art collectors. After living in London during the First World War, Gray's first major project was the decoration of the sumptuous Parisian apartment of Madame Mathieu-Levy on rue de Lota, for which she designed the bulbous Bibendum and Dragon chairs (the latter went on to sell for a record £19m in an auction of Yves Saint Laurent's belongings in 2009). Obscuring herself behind a man's name, ever illusive, she opened a shop called Jean Desert in Paris in 1922, selling lacquer screens, furniture, mirrors and carpets. Inspired by the De Stijl group and the Dutch avant-garde, her furniture took a dramatic turn in the 1920s from rich, art-deco designs to the inventive modernist items made of glass and tubular steel that fill the rooms of E-1027. Around this time, she met her lover Jean Badovici, a Romanian architect and editor of magazine L'Architecture vivante, who encouraged her to try her hand at architecture. In 1925, Gray found an idyllic, inaccessible plot of land on the edge of a rocky hillside, overlooking the Mediterranean sea near the small village of Roquebrune, in between Menton and Monte Carlo. Here she built her white, flat-roofed, ocean liner-esque villa, gently clinging onto the terraced landscape on pilotis. Gray lived on site between 1926 and 1929, drafting up plans and overseeing building work herself. She named it E-1027, a code name for Gray and Badovici's initials - E for Eileen, 10 for the J of Jean, the tenth letter in the alphabet, 2 for B (Badovici) and 7 for G (Gray). Today E-1027 is still accessed from the same long, thin path that runs alongside the railway line. Weaving down terraces of lemon trees, visitors are greeted by a flat roof, topped by a lantern of glass and a thin mast, an ocean liner's funnel perhaps, or the top of a lighthouse. The wide vista of sea stretches beyond, but because the house is perched on such a steep hillside, with the rocks below concealed by trees, it feels like you are stepping onto a docked boat ready to set sail. The main entrance is tucked discreetly at the back of the building, with little stencilled signs telling the visitor to 'entrez lentement' (enter slowly). Inside, the house is surprisingly small. It's neat and compact, again bringing to mind the interior of a boat. As Gray says in an issue of L'Architecture vivante dedicated to E-1027: 'This little house concentrates everything that could be useful for comfort and enjoyment in a small space. Nowhere did we attempt to create a line or a form for its own sake; everywhere we thought of the human being, his sensibility, his needs.' The Day Bed and Petite Coiffeuse installed in the downstairs bedroom, often used by guests