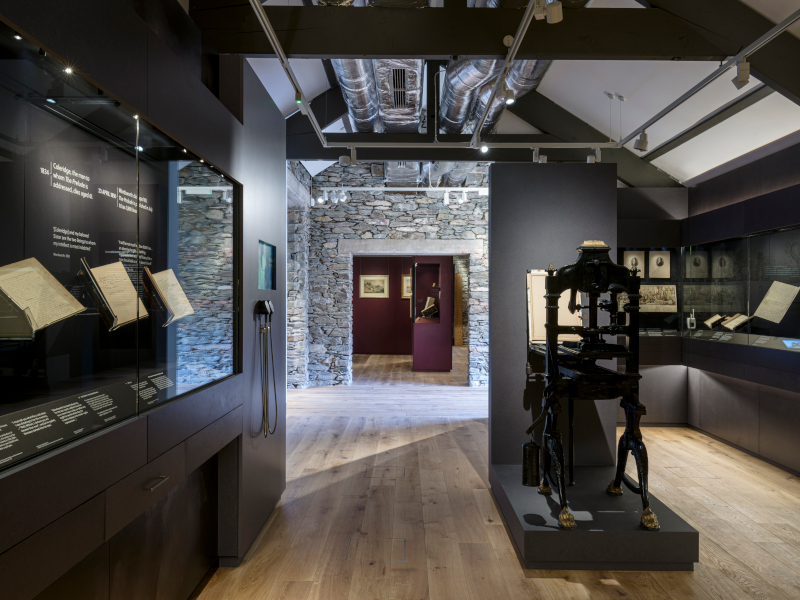 Nissen Richards and Purcell worked together for a new museum in Grasmere to celebrate the poet.

THE WORK of English Romantic poet William Wordsworth is imbued with the landscapes of the Lake District: those of his childhood in Cockermouth and a later period living at Dove Cottage in Grasmere with his sister Dorothy. The Wordsworth Grasmere, the museum centred around their former home, has been redesigned by Nissen Richards, working with architects Purcell, on a scheme that is equally filled with his words. Not only are his manuscripts abundantly present across the site, but his words become a texture of the museum: carved into paving underfoot; lit up on walls; and filling the air through sound design by Carolyn Downing. 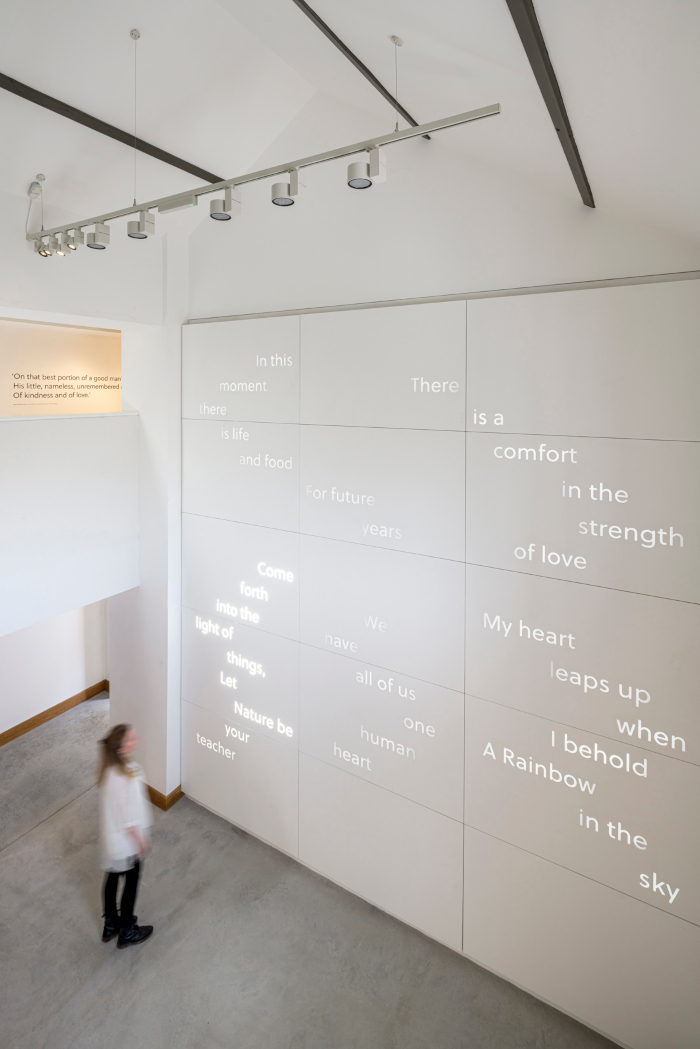 Dove Cottage first opened to visitors in 1891, but until recently the museum was contained within a single one of its rooms. The additional museum building was opened in 1981 located in a former coach house, and the stand-alone Jerwood Centre completed in 2005 to house a world-class collection of Wordsworth manuscripts, first editions and paintings. Coinciding with the 250th anniversary celebrations of the poet’s birth, the latest project, Reimagining Wordsworth, consists of two parts: the first, focused on the conservation and reinterpretation of Dove Cottage; and the second, concerning the museum at Wordsworth Grasmere, which has been expanded and remodelled by Purcell. Across both, Nissen Richards was responsible for the gallery and exhibition design, interpretive overviews, signage and wayfinding, while a separate commission asked the studio to design the new identity for Wordsworth Grasmere. 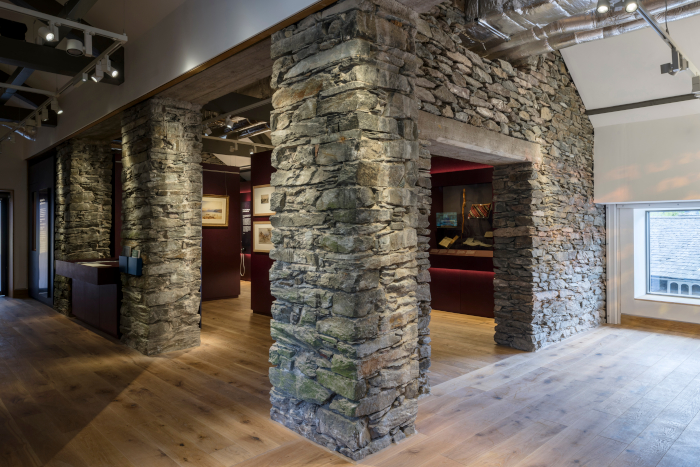 The identity design introduces the researched and sensitive approach taken throughout. ‘Wordsworth’ is rendered in lowercase, in a bespoke typeface inspired by glyphs from the first edition of Wordsworth and Coleridge’s Lyrical Ballads, and is combined with an uppercase, Sans Serif ‘Grasmere’. This is used across printed materials, merchandise and signage throughout the site. Designed to be as inclusive as possible and targeting an international audience, the wayfinding uses pictograms to communicate elements such as visiting times, walking distances, closed areas, and rain- and sunshine-friendly paths. 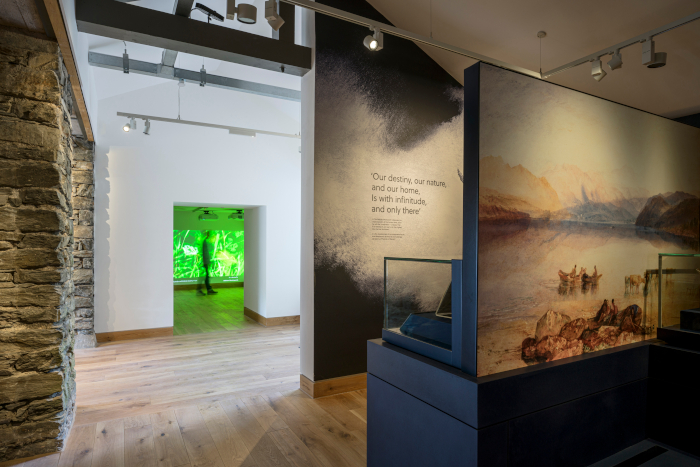 The ‘pause space’ between the galleries is left white

Slate, from local supplier Gordon Greaves Slate, is used for the signage, with the writing etched and ink-filled. The choice of natural materials, also used in the architecture and landscape design, allows the project to ‘melt’ into the landscape, Nissen explains, while internally the exhibition design takes on a range of its hues, such as the rust colour of local Easedale Ironstone. An ink-stained pattern provides a backdrop to the logo, bringing the materiality of writing to the fore; this print is also used at a larger scale across exhibition surfaces. 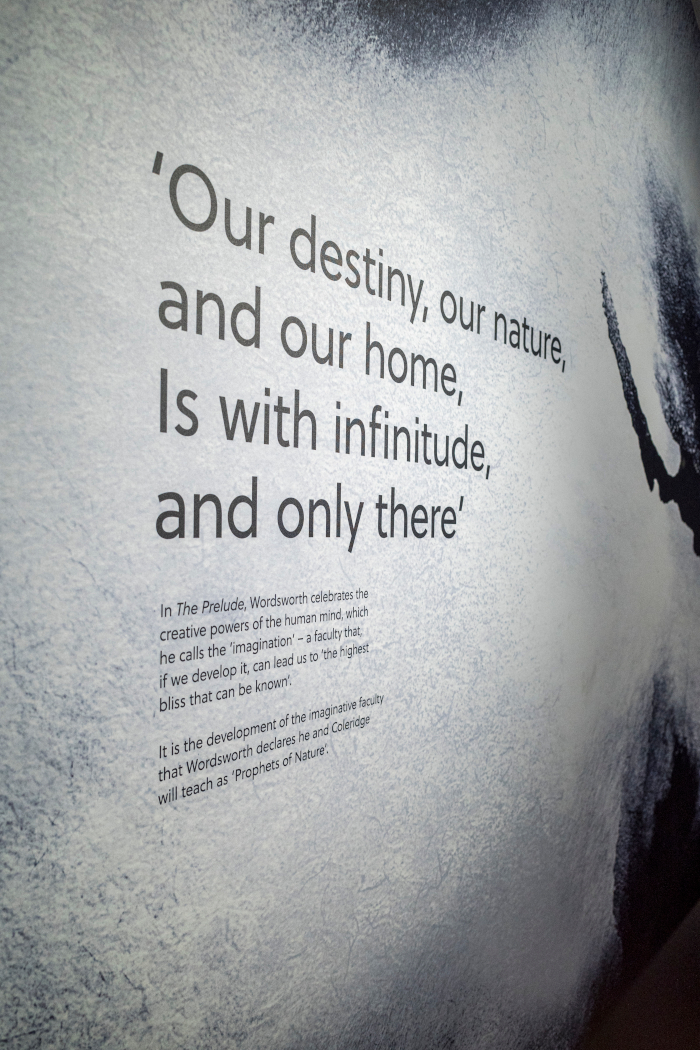 Space has been opened up across the site by Purcell, and the museum extended carefully in a tight plot to maintain views to the landscape and across the site, also making a coherent whole of the different buildings and increasing legibility between them. The architects converted the old museum shop into a cafe, moving the shop to the museum space, and a new office and accessible learning space was created to be used for presentations, discussions and workshops. The significant level changes across the site posed some challenges for the landscaping too, and OPEN’s work included rationalising and reworking steps and ramps to ensure accessibility throughout. 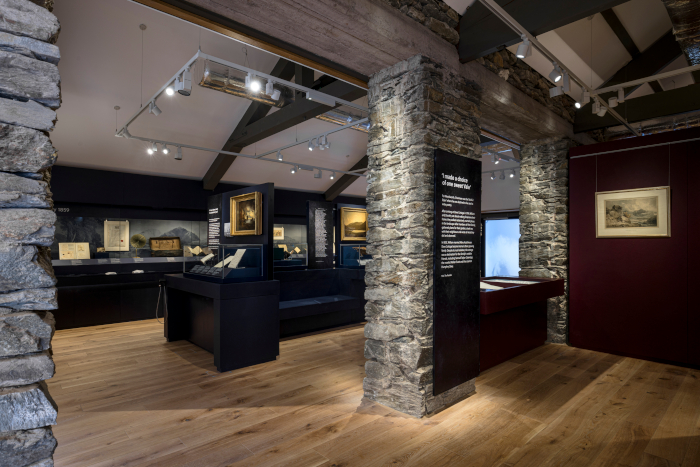 Nissen Richards and Purcell worked together to choreograph new visitor routes across the site. The main entrance opens to the shop and ticketing area before visitors reach the new double-height museum space, where they are greeted by quotations from Wordsworth’s work, written on a full-height light wall. Visitors then watch an immersive introductory film by Nick Street, before entering Dove cottage – an interpretational approach that introduces visitors to the cottage by showing it full of life. 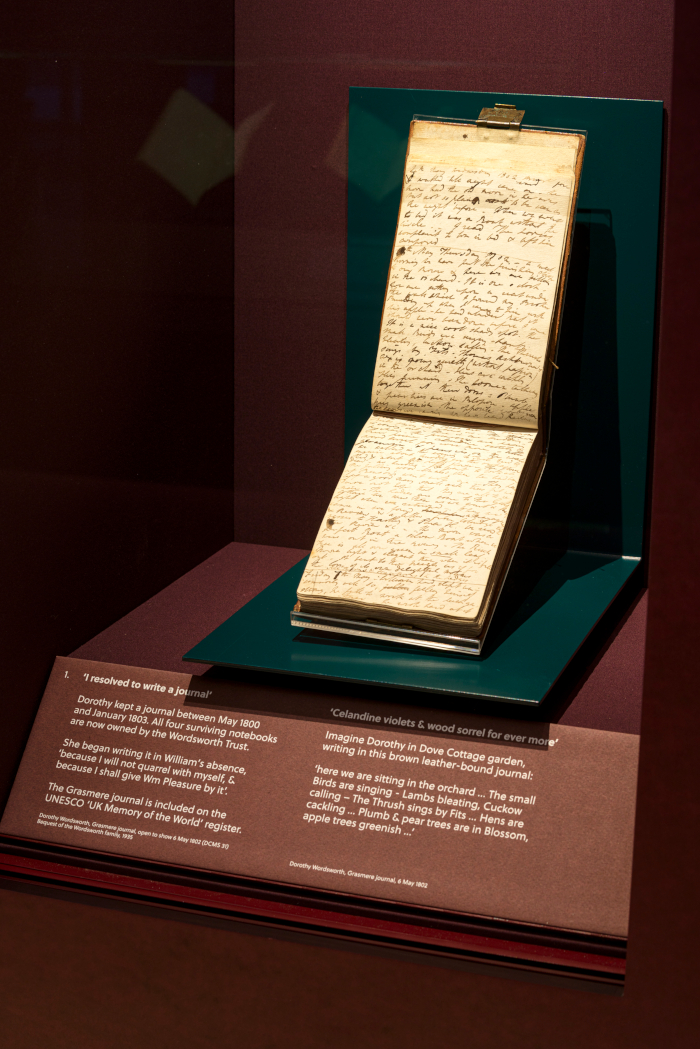 The Grade I listed cottage itself is treated as a living museum, but the approach, as director Pippa Nissen explains, ‘...was not to replicate the original state, but to intimate and evoke its past history’. While original furniture remains, later incongruous pieces were removed and new furniture commissioned from local craftsmen with specialist historic knowledge.

Dorothy Wordsworth was also a prolific writer, and her celebrated Grasmere journals are full of stories of their life that were used to inform an object-based treatment of the property. This ‘wonderful resource’, as Nissen explains, ‘has been combined with film and sound design commissions to suggest a lived-in and humble home, where extraordinary writing took place’. ‘Traces of life’ are designed into the display, through crumbs left on a plate, an open book or a chair left at an angle. As Elin Simonsson, head of interpretation at Nissen Richards Studio, explains further, ‘the concept is for visitors to explore the cottage using all their senses… effectively becoming “Wordsworthian” as they pass through the space, walking where William and Dorothy walked, sitting where they sat, ascending the same staircase, seeing through the same windows.’ 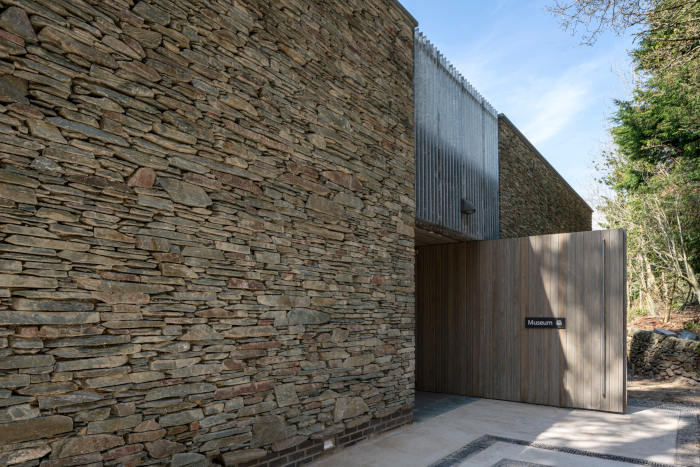 Outside spaces are also an important part of the museum experience

After Dove Cottage, visitors pass through its garden. These outside spaces are an important part of the museum experience, and OPEN worked to ensure existing trees were retained, while taking inspiration for new planting proposals from both William and Dorothy’s writing.

The visitor journey itself was inspired by the poet’s processes, Nissen explains: ‘He would first experience the landscape and then reflect back on that experience in terms of “spots of time”, by pacing and walking, referring to his poetry as “emotion recalled in tranquillity”. We have reflected this by creating more intense moments, followed by a pause space for reflection and further connection to the landscape.’ The ‘pause space,’ located between the four galleries that make up the museum, is left white, like a blank page at the start of writing, but quotes on the wall in a dichroic material come alive through colour.

Each of the different gallery spaces, meanwhile, are coloured in accordance with their contents. Gallery One has a nature-inspired soundscape and is coloured blue after the slate quarry of Loughrigg Fell. Here poems such as I Wandered Lonely as a Cloud are highlighted, and the display mixes manuscripts with objects such as Wordsworth’s ice skates. Gallery Two features two screens with a 50-minute loop of recited poetry, recorded in a range of voices from well-known actors, academics and local people, with a monochromatic scheme that allows the AV to dominate. Gallery Three is inspired by ink stains, devoted to the physical act of writing, while documenting the creation of The Prelude, Wordsworth’s major life work and a significant part of the canon of English literature; 23 of its 24 manuscripts are displayed here. Gallery Four, coloured in slate and rust tones, returns to the ground in order to root Wordsworth’s work and life in the landscape. It explores his family life and its full-height display cases of mini room-sets help recreate a sense of domesticity.

Curator and head of learning Jeff Cowton said the team were ‘overwhelmed by the way in which the interpretation and design makes Wordsworth’s words live’. But it is not just his words that are given life: ‘The displays spark our imaginations into the lives of real people living 200 years ago and lead us to think of the relevance of their words for us today.’

Through the material-focused and sensory redesign of the museum the Wordsworths are reanimated, but equally important is the way the landscape brought in, as well as the work, craft and voices of local people – fulfilling the client’s wish that the link to the local area be underscored – making the project all the richer.