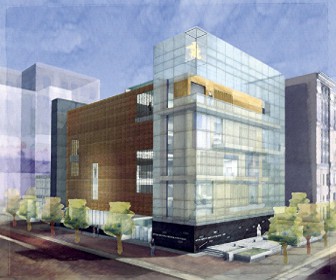 The NMAJH, a Smithsonian Affiliate, celebrated the opening of the new $150 million, 100,000 square feet building with a grand opening weekend from 12-14 November 2010. It will be the only museum in the US dedicated solely to telling the story of Jews in America.

James Stewart Polshek designed the new NMAJH as a composition of two interdependent forms - one translucent and the other opaque. The west façade facing Independence Mall is a glass prism that expresses the openness of America, as well as the perennial fragility of democracy. The north wall is constructed of terracotta, symbolizing the strength of Jewish survival and the protective shelter of American freedom. Inside, the two forms are interlocked and bridged by a network of staircases. An 85ft-high, light-filled atrium connects the entry level to the exhibition floors above and the Dell Theater and Education Center below.

Two public sculptures symbolize freedom, the core theme of the museum. The carefully restored 19th century ‘Religious Liberty’ sculpture by Sir Moses Jacob Ezekiel sets a dramatic contrast with the minimal glass veil of the façade. The uppermost corner of the glass façade features the LED sculpture ‘Beacon’ by celebrated media artist Ben Rubin. The fluid, undulating panels of this sculpture appear as pages in a book, inspired by the Talmud, one of the central texts of Judaism.

Encompassing 25,000 square feet of gallery space on three-and-a-half floors, the core exhibition will explore the challenges faced by Jews since their arrival on this continent in 1654, celebrating their experiences in every facet of American life and throughout every phase of the country’s history. Featuring more than 1,000 artifacts, as well as films and state-of-the-art technology, the exhibition will showcase how an immigrant population flourished under freedom and will highlight the diverse backgrounds and experiences of Jews over a period of more than 350 years. An additional 5,000 square feet will be used for changing exhibitions.

The new building will also feature an Education Center, the 200-seat Dell Theater, a multipurpose event space with capacity for 600 on the fifth floor overlooking Independence Mall, a café and a museum store.

The NMAJH moved from the 15,000 square feet location it has occupied since opening in 1976 to the new building on Independence Mall. Rising five storeys above Independence Mall, in the heart of historic Philadelphia, the new home of the National Museum of American Jewish History will join Independence Hall, the National Constitution Center, the Liberty Bell and other landmarks at the hallowed site of America's birth.