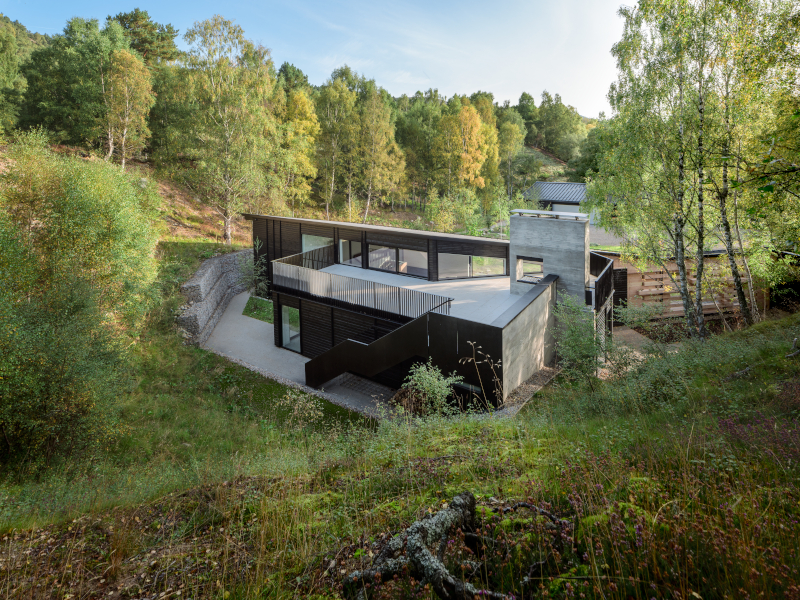 In the bowl of a disused gravel quarry, dipping below the dense coverage of birch, aspen and pine in Cairngorms National Park, is the new Scottish headquarters of Moxon Architects. The surrounding landscape is spectacular; ‘all glacial drumlins, eskers’, describes Ben Addy, managing director of Moxon, creating a ‘really lovely rolling knot of landscape’. While this area is a Site of Special Scientific Interest, the former quarry, by contrast, had been used as a tip by the roads department of the local council, and so was ‘full of road sweepings and bits of junk’ when Moxon arrived at the site.

Once cleared out, a studio and cafe were positioned within the characteristic bowl shape of the quarry, to feel embedded in the landscape – in a ‘recessive’ way, as Addy puts it. In the remaining space, Moxon is working to repair the damage caused to the land by the site’s years as a dump: re-establishing wetland with a pond and a bog in the middle (the studio roof directs rainwater into it); creating a wild flower meadow; and incorporating native tree species such as juniper, as well as protecting the self-seeded birch that has started to grow there.

The single-storey building sits several metres below the rim of the quarry, with sections of mono-pitched roof angled to match the slopes of the landscape. Its exterior is predominantly black, interrupted by two concrete chimneys. The roof provides a sheltered colonnade around the building and over a walkway paved with wooden cobbles made from Douglas fir offcuts.

Although located just off a main road, the building is mostly hidden, except for a public-facing cafe called Tàrmachan. ‘The one bit that sticks its head out, as it were,’ Addy says. Including a cafe in the design aimed at creating jobs in an area where they are relatively scant, but the unique setting and beautifully designed building also provides an opportunity to do something a bit different, Addy explains. Tàrmachan, run by a couple, offers speciality coffee and food made with high-quality, locally sourced ingredients. ‘They’re really young and are making the most of the opportunity,’ Addy says. ‘They’re doing an amazing job.’ A meadow behind the studio; a beautiful, holistic place to create

As a result of the cafe’s presence – already popular in the short time it has been open – Moxon frequently has curious people exploring the perimeter of the studio, and even on to its roof. Given the rural location, this was a welcome surprise. ‘It was just wonderful because there were so many people around the site, wandering around, enjoying the place,’ Addy recalls. ‘It’s quite nice for us as architects to have a bit of life around the place.’

The team had previously been working from a studio nearby, located in one of the outbuildings of Addy’s home. This had a number of problems, not least the steep track to the door – difficult to traverse in winter months. But it also lacked meeting rooms and sufficient space, in part because Moxon didn’t originally anticipate it would have so much work in Scotland compared with its London office.

The new space is more than ample for the practice’s current staff, leaving room for the team to grow up to a ‘sensible maximum’ of 25 – Addy says that the practice is already looking to take on more staff once lockdown restrictions end.

There is a main open studio space, filled with work stations and drawing boards; a model room that is ‘necessarily more messy’, Addy assures; a more formal boardroom-style meeting room; and a ‘living room’ area for staff, for relaxing with coffees or taking informal meetings. Birch trees have proliferated on the site, a development that Moxon wants to safeguard

The interiors are filled with white, as a counterpoint to the exterior’s black surfaces. It is light and airy, the north light coming in through a clerestory window at first-floor level. Addy notes that this provides a ‘good, even quality of light’, without issues of direct sunlight, as well as providing ‘wonderful’ views up towards the birch trees that line the quarry’s rim.

The most striking feature is a wall that intersects the buildings, made of giant interlocking blocks of Douglas fir. Running through internal and external spaces it divides the public and private spaces, though, crucially, with apertures providing ‘filtered views’, Addy explains; these are not solid divides. Having this stack of timber clamped together with vertical steel rods is a ‘pretty unusual way to make a wall’, Addy admits. Its construction ‘allows for the timber to shrink, split and contract as it dries out over the years, and yet it stays in the same place’. Looking at it a year later, Addy says that although there are other ways of doing it, ‘I don’t think [they] would have been anywhere near as successful.’ The Douglas fir wall, partitioning the private from the public

The ability to pursue these ideas and realise every detail exactly as desired was made possible by Moxon being not just client and architect, but also contractor on the project – the latter through Addy’s business, Tor Contracting. While that meant Moxon carried all the risk of the project by itself, it also allowed space for opportunity. ‘You can apportion risk in a different way, you can apportion cost in a different way,’ Addy explains. The studio, firmly embedded in its landscape

It enabled Moxon to pursue these more unconventional details. ‘We were able to say, “We are going to spend more time on these details and make sure that they work, and, you know, if it doesn’t work the first time around then we’ll try it this alternative way.” You’ve got that latitude that you wouldn’t have otherwise.’ In addition to commercial areas, there are leisure rooms for Moxon’s staff to relax in

Quarry Studios, carefully designed to fit its unique context, with ideas pursued and finely executed, not only creates a wonderful base for Moxon’s Scottish business to grow further, but also serves as a persuasive introduction to the practice, whether for visiting prospective clients, or indeed any cafe regular or curious passerby.