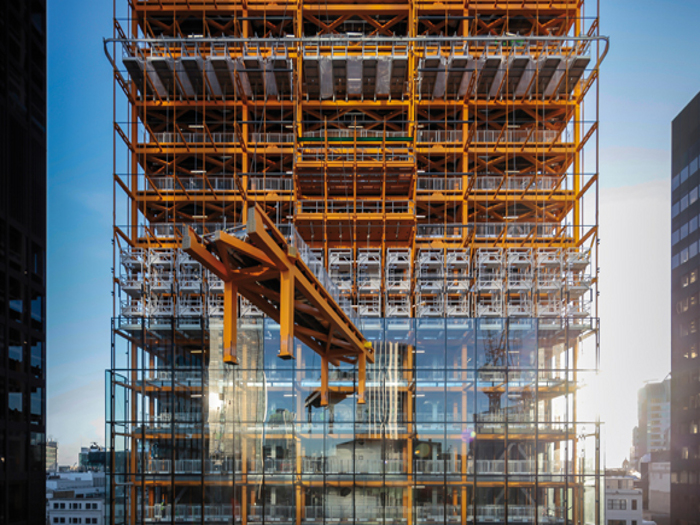 The construction process for Rogers Stirk Harbour + Partners’ Leadenhall Building is almost like architectural theatre in the City of London. Herbert Wright reports from 140m up, as he watches the yellow table-modules being craned into position..

Like a giant Meccano construction set, a vast metallic wall has been rising rapidly into the topmost reaches of the City of London's skyscraper cluster. From the north, its visibility rivals The Shard's, but its economic effect extends beyond the city horizon, to communities as far as Northern Ireland.

This is the north core of the Rogers Stirk Harbour + Partners (RSHP)-designed Leadenhall Building, an office skyscraper already partly pre-let, that at 244.5m high will be the tallest in the City when it tops out this June. The north core itself will be 204m high, and its basic building block is a modular stacking platform with four leglike columns. This block known as a table and is a collaborative design between RSHP and structural engineering firm Arup. Its steelwork is painted several shades brighter than the colour of Cheddar grated with that kitchen utensil which has already popularly lent its name to the skyscraper.

The Leadenhall Building radically challenges conventional high-rise design and construction. Most skyscrapers are built around a load-bearing central core, usually concrete, carrying lifts and services, while the envelope enclosing the surrounding floors is largely a matter of appearance. As Andy Young, project architect on the Leadenhall Building, has commented, you normally get 'a party frock' exterior 'and, if you're lucky, a fancy hairdo on top'. The Leadenhall Building, however, splits away the core services, including lifts, washrooms, 85 per cent of service risers and all plant distribution, into a 47-storey north-facing stack.

All the office floors, and a seven-storey open galleria underneath them, are within a vast, visible megaframe, allowing clear, open floor plates. Those floors reduce from 2,000 sq m to 600 sq m with height, because the frame slopes back from Leadenhall Street to protect views of St Paul's Cathedral from Fleet Street, giving the building its unique wedge form.

The whole building's rational, engineering-led structure has its roots in the high-tech architecture that Richard Rogers trailblazed with icons such as the Pompidou Centre (with Renzo Piano, 1979) and, literally across the road from the new tower, the Lloyd's Building (1986). Graham Stirk, the project's lead architect and a senior partner at Rogers' practice since 2011, says that Leadenhall Tower's 'distinctive profile is further emphasised by a clearly legible structure that, when combined with the dynamic vertical movement on the north core and the cathedral-like public space at the base, form what will be a building that displays an immense, if not heroic, clarity'.

Stirk previously led design on the Lloyd's Register building (1999) and 88 Wood Street (2001), both mid-rise London towers defined by exterior plant and services, including lifts rising in glass columns. Young, who also worked on 88 Wood Street, notes that the Leadenhall Building 'adopts the same approach employed for the smaller buildings we have done and applies it to a high-rise structure'.

That approach is taken to new and sublime heights with the north core's 20 scenic passenger lifts supplied by Kone, placed in three banks within glass shafts and suspended from cantilevers beyond the yellow table stack. While the lifts and their counterweights slide up and down, red and blue-coded vertical zoning, internal lights and edges of yellow steel will make the north core dazzle. When finished in 2015, the matrix of the north facade will scintillate like a huge kinetic-electric artwork, visible for miles.

Currently, the action on the north core comes from the construction crew. But before we go up to join it, there are two further factors that make the big picture. First, this is a project that's big on pre-assembled parts. Andrew Butler of construction contractor Laing O'Rourke told an audience at New London Architecture that 'if we can do it in a factory, we will'. He reckoned that while a normal project may have about a third built off-site, this is about 85 per cent.

Modularity may have its roots in Le Corbusier, but it's currently looking like a hot trend in high-rise construction. Last year, construction started on a 32-storey Brooklyn skyscraper called B2, designed by New York's ShoP Architects, with more than 60 per cent built off-site. It followed hot on the heels of the 30-storey T30 hotel project, assembled in just 15 days in China at Hunan's Dongting Lake by the BSB division of the Broad Group. There, 93 per cent of the building came out of factories.

Young observes that 'if there is a trend for modular design and prefabrication it is probably due to the safety aspects as much as the speed of construction - there are less tasks being carried out on the site and most of the labour is carried out under factory conditions. We are not trying to compete with the Chinese for the fastest build'.

The second factor is that distributing the construction work has a national benefit. Developer British Land reports that its portfolio of London construction projects, headlined by the Leadenhall Tower and the Make-designed 5 Broadgate building, will contribute £1.2bn to the UK economy and support 32,000 jobs between 2011 and 2015 and, crucially, of the £254m budgeted on constituent elements, from steel to washrooms, a relatively high 73 percent is regional spend.

The Leadenhall Building is using 18,500 tonnes of steel, mostly from Watson Steel of Bolton. In the case of the yellow tables, the steel structures are made and painted by Fisher Engineering, a steel fabricator in Enniskillen, Northern Ireland, and fitted out at Crown House Technogies in Oldbury, West Midlands, a specialist in modular building services. That involves installing ventilation pipes, chilled water systems and electricals under flooring panels that on-site are known as 'planks', even though they're precast concrete, not wood. As Young enthuses, the prefabrication means that 'not only are the works on site minimised in scope, the speed of assembly on site is greatly increased'.

The Leadenhall Building design started in 2002, but this amazing skyscraper still points to the future in design and structure, and not least in construction. Butler notes, for example, that the project is done 'entirely in a BIM environment'. And when it comes to the yellow tables, the final word goes to Wilkinson: 'For me, they are the epitome of how the industry should go'.

The north core is made of 139 tables, and a regular floor has three, aligned eastwest. On the ground, there will be a public passage through a yellow table into the galleria. Alone, the north core would only free-stand for five storeys, but the middle table is anchored to the megaframe with a bridge forming the building's 'neck'. The tables diminish in mass with height - the heaviest lifted was 34.4 tonnes, but on top under the lift machinery, they will be just 19.5 tonnes. These are big beasts: 3.3m wide, 4m high, the end tables 13m long and central ones 16m. The first table arrived on site in March 2012, and their stacking has always followed a few storeys behind the megaframe. By early January, when Blueprint visited the site, they had reached level 34.

At 7AM, table 34-WEST was already parked at the vehicle delivery point beside the adjacent Aviva Tower. With two police escorts, they're driven in early, when the sky is dark and the traffic light. Karl Wilkinson, project engineer with Laing O'Rourke, explained that first, edgeprotection fences are installed on the table top before it goes up - even when straddled across lorries, if preinstalled the fence would challenge the 5.03m height clearance limit for motorways.

The table's lift, by a 220-tonne crane that has been jacked up through the structure as it has risen, takes about 10 minutes, but there's plenty of time before that to don personal protection gear and join section engineer Martin Staehr.

At 8.30AM, we stride across the site beneath the megaframe, now busy with construction crew. Unlike the Geordie steelworkers who worked on The Shard, the steelworkers here are mainly from Bolton, and Lancashire voices fill the hoist on the eastern side which delivers us to level 32.

You step out into a sandwich of open space between rectangular floorplates already installed. The views are exhilarating - to the south, almost level with the bulging head of the Rafael Viñoly-designed 20 Fencurch Street, also busily under construction, and The Shard behind. On the other side of the 'neck', the yellow tables already form a long corridor which one day will contain washrooms and pass between lift banks. For now, a cherry-picker is parked - they're used to complete the splicing of adjacent tables. Tower 42 and 30 St Mary Axe climb beyond the fencing, and with the Heron Tower as a backdrop, a complex pulley-and-hook bit of kit descends past us on cables, to collect Table 34-WEST.

We return to the megaframe and on to a staircase into the Extreme Heights zone, where floorplates are still to be laid. Up there in the wind and steelwork with nothing that would suggest any notion of interior, it's like climbing a stairway to heaven...

At 9.50AM, looking down from the megaframe at level 38, we see table 34-WEST in motion. As it is gently lowered, the crew, some right at the unfenced end of the table, make contact to manoeuver the table legs into place.

It's a tricky operation, handling a dangling lump of metal hundreds of times heavier than a person with just gloved hands and a 140m-odd drop beside you. The table is secured by bolting it into place before 10am, like another brick in the wall of the North Core. Subsequently, the service pipes in adjacent tables will be connected, and a concrete 'plank' laid to fill the gap over them. The crew may be hanging out high above the City, but they're not hanging about - there's plenty more work coming when three tables a day can be installed.

A version of this article originally appeared in Blueprint #325 (April 2013).