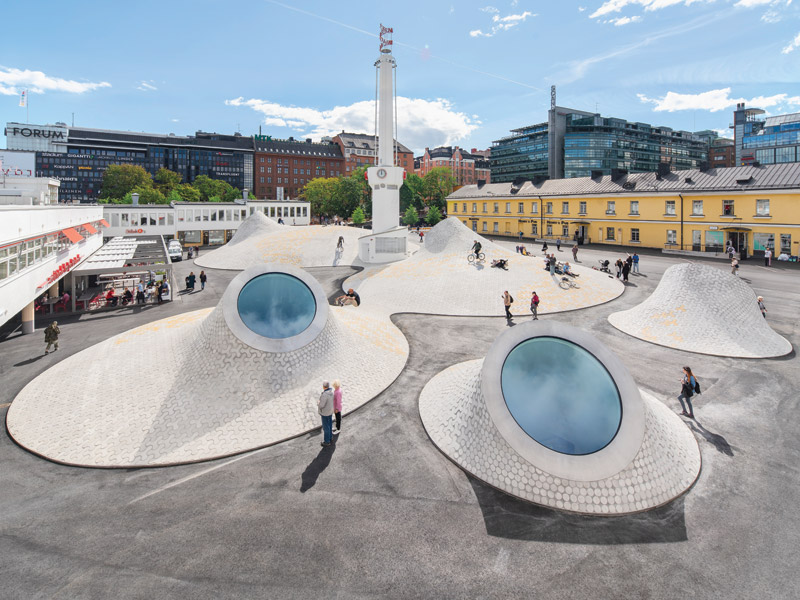 Even before the Amos Rex museum opened, central Helsinki offered one of the most extraordinary clusters of cultural centres in Europe — for architecture as well as the arts. Within a few hundred metres of the Eliel Saarinan-designed Helsinki Central Station (1919), perhaps Europe’s most beautiful, you find the grand neoclassical Ateneum museum (Theodor Höijer, 1887) which hosts the National Gallery, while both the stolid-but-soaring National Museum of Finland (Gesellius, Lindgren and Saarinen, 1910) and opposite it, Alvar Aalto’s dreamy, gleaming Finlandia Hall (1971) are reached after passing Steven Holl’s elegant, curving aluminium form of the Kiasma contemporary art museum (1998). Nearby, a big, white, barrel-vault-roofed Olympic tennis venue (Helge Ludström, 1937) now hosts the Helsinki Art Museum.

Now, they are joined by Amos Rex, in which local architecture practice JKMM has combined an iconic 1936 building with a suite of substantial subterranean spaces and a plaza of hillocks and funnels that turn glass eyes to the sky. This plaza, called Lasipalatsi Square, looks like a fun fantasy moonscape — the sort of place that the playful Seventies aliens The Clangers would have felt at home in, had not the citizens of Helsinki enthusiastically colonised it as soon as it opened. It may yet just challenge the Lutheran Cathedral (1852) by Carl Ludvig Engel as the icon people identify Hesinki with. Amos Rex is spelled out in spiralling letters on the 25m-high chimney, re-appropriated to ventilate the museum below. Image Credit: Tuomas Uusheimo

In the early nineteenth century, the Amos Rex site was a military barracks for the Russian Empire, which had won back control of Finland from Sweden. Just one side of the barracks still survives on the parade ground it enclosed. In 1936, the L-shaped, two-storey Lasipalatsi, meaning Glass Palace, opened with the adjoining higher volume, the Bio Rex cinema, which closed the third, northern side of the parade square.

The designers were young architects: Viljo Revell, Niilo Kokko and Heimo Riihimäki. It was only meant to be there temporarily, while Helsinki hosted the 1940 Olympics, but the Games were postponed by the war. The functionalist building survived, with its line of shops facing the busy north–south boulevard of Mannerheimintie, and the Bio Rex cinema shone its name out in neon, giving the corner a jazzy modern downtown glamour. The parade square became a bus station and plans to build a 10-storey office block on the site never materialised. The underside of the domes are covered with fields of perforated aluminium acoustic disks. Image Credit: Tuomas Uusheimo

In 1965, the Amos Anderson Museum opened a block away, to show the modern art collection of the recently deceased newspaper magnate whose name it took. Unlike Helsinki’s other major museums, it was stuffed into premises shared with offices and residential. The building, designed in 1913 by WG Palmqvist and Einar Sjöström, was in a narrow sidestreet that made it challenging to deliver works to. Kai Kartio, director of Amos Rex, recalls: ‘It was charming in a way but it was a bit of a labyrinth.’ The museum’s temporary shows grew in reputation and ambition, until the need for new space became irresistible.

The parade square was just right for the Anderson museum’s expansion plans — central, visible, and not far from its old location. Konstsamfundet, the private foundation set up by Amos Anderson, appointed JKMM in 2013 and was ready to fund a €50m (£44.7m) new museum, at no cost to the public. The City of Helsinki said yes in 2014, and even donated the Lasipalatsi, which had undergone restoration by Talli Architects in 1999, to the project. With no strings attached, the Anderson plan was a very different situation to Helsinki’s other large art museum plan of the time, to build a Helsinki Guggenheim. That attracted 1,751 architectural competition entries, but the Guggenheim Foundation required a commitment of public funds, as well as a $20m (£15.2m) fee (paid by donors) for licensing the Guggenheim brand name. The city finally pulled the plug on it in 2016. At Amos Rex, no extensions above ground were allowed, ‘so going underground was the only option’, comments JKMM’s founding partner Asmo Jaaksi, the lead architect. While the Guggenheim fiasco was in full play, contractors were excavating 13,000 cubic metres of rock from beneath the old parade ground behind the Lasipalatsi. For such a high-profile project, it remained virtually invisible during construction, with the parade square hidden behind the 1936 building and hoardings.

Even when it opened, it looked like business as usual as you approached Amos Rex at its Mannerheimintie entrance. Amos Rex opened in August. The Lasipalatsi contains restaurants and bars, as well as the Amos Rex entrance, which presents two ways to go when you step inside. Stairs lead up to the Bio Rex cinema lobby, a stunning art deco space with a spiral staircase leading up to the cinema’s upper-level boxes, and clusters of globe lamps hanging from a red ceiling. The interior design was by Eino Kauria, who also worked on Alvar Aalto’s seminal Paimio sanitorium (1939). JKMM’s intervention in the cinema was minimal, but included finding a circular red velvet couch to place under the the spiral staircases. The 550-seat cinema is less swanky, grey but distinctly futuristic with its flying-saucer-like lights across the ceiling, and now it has a new screen curtain. It is Helsinki’s only surviving 1930s cinema and with arthouse programming by Korjaamo, it makes Amos Rex’s offering a multi-platform one. The Lasipalatsi (Glass Palace) and Bio Rex cinema were intended to be temporary — now they front Amos Rex with romance and glamour. Image Credit: Tuomas Uusheimo

The museum itself is accessed via a stretch of the Lasipalatsi frontage in which three shops become one museum shop, all cream and with wooden display boxes and suspended clear globe lamps that reference the heritage. Here we see the first glimpse of the playful new architectonics. A new staircase descends underground, below a ground-level window looking into Lasipalatsi Square, as the old parade ground is now called.

Through it, we see a slanted circle of glass, like the window of a space pod in Stanley Kubrick’s 2001: A Space Odyssey, but grounded in a mound rising from the new urban plaza. Beside the stairs are two 15-capacity lifts especially designed by Kone for Amos Rex, with programmable walls. At the bottom of the stairs is the museum lobby, a minimalist, futuristic white space where, by contrast, the cloakroom and doors are black rectangles set into the walls. It has something of Harry Lange’s set design for the Space Station Hilton lobby in Kubrick’s space epic, although without the Djinn chairs — instead, there are white circular benches by JKMM. But the stand-out part of it all is the 250 sq m ceiling, which is a work by local designer Doctor Design, called LUX AMOS. This is a field of spirals crafted from 2.5km of white fabric, in which are set 318 DALI programmable LEDs. Two large circular skylights break into the fabric installation, one revealing a view at an angle through a mound in Lasipalatsi Square, perfectly framing the outside stairs to the projection room of the Bio Rex. In daylight, the effect is as timeless as a Hopper painting.

On one side of the lobby are the washrooms, which extend the stark black and white subterranean design ethos. ‘We worked on the toilets a lot,’ comments Kartio, with a face as straight as if delivering a line in a movie by the Finnish director Aki Kaurismäki. On the other side are 2,200 sq m of galleries. The LUX AMOS ceiling installation of fabric and LEDs by Doctor Design surrounds a skylight that looks up to the cinema projectionist’s stairs. Image Credit: Tuomas Uusheimo

The two largest are either side of a legacy chimney that rises 25m above ground level and has been repurposed for ventilation and as a fire escape. They lie under the largest of the two mounds above, and have dome ceilings, covered with fields of perforated aluminium acoustic discs, of which there are 8,600 in total. The largest dome reaches 9.45m from the floor, and although it’s not quite as big as the 43m-wide Parthenon’s in Rome, at 32.5m across with no support except at the walls, it’s still quite a feat of engineering. Like the Parthenon, the domes are concrete vaults, here 20cm thick.

Asked if he was inspired by the great thin-structure engineer designers of the mid-century, Jaaksi says: ‘I admire a lot [Frei] Otto, [Felix] Candela, [Pier Luigi] Nervi and the other great “poets of the structure”. But maybe they were not so much in my mind while designing Amos Rex. The structure was not a driver, the form came first.’ There are two smaller galleries, more conventionally shaped. Finally, there’s an education workshop, also with a domed ceiling, and featuring a big black torus you can sit on, called a WOW tyre designed by Päivi Meuronen. The futuristic 550-seat Bio Rex cinema is Helsinki’s only one to survive from the 1930s. Image Credit: Tuomas Uusheimo

There is a closed level beneath the galleries, but the final remarkable feature is Lasipalatsi Square itself, with its crazy artificial landscape topography. Five hillocks or mounds curve up into slanting skylights and rise as high as 6m. Jaaski calls them ‘anti-buildings’. They are paved with a layer of bespoke tri-lobe clover concrete tiles, some of which are yellow-orange, similar to the colour of the Lasipalatsi’s frontage. Kartio describes this hard but whimsical plaza as ‘a new kind of urban space’, and compares it with the Centre Pompidou and its sloping square. Above it all, a helix of new neon letters has been installed at the top of the chimney, saying AMOS REX.

Across Lasipalatsi Square is the Lasipalatsi, and beyond it, the Sokos department store (Erkki Huttunen, 1952). Image Credit: Mika Huisman

Amos Rex is not the only new cultural landmark emerging in the city — the Helsinki Central Library Oodi by local practice ALA is due to open in December, and a new home for the Design Museum may follow. But in the meantime, JKMM has already given the city something that will be a hard act to follow. Amos Rex is unique, not just in its fantastic, bizarre public realm concealing extraordinary spatial adventures below ground, but in the synergy between those and the glitzy yet stripped-back modernism of the 1936 building. Everything is futuristic, and simultaneously romantic. If you can’t go to the Moon, Amos Rex offers something else outside of this world.