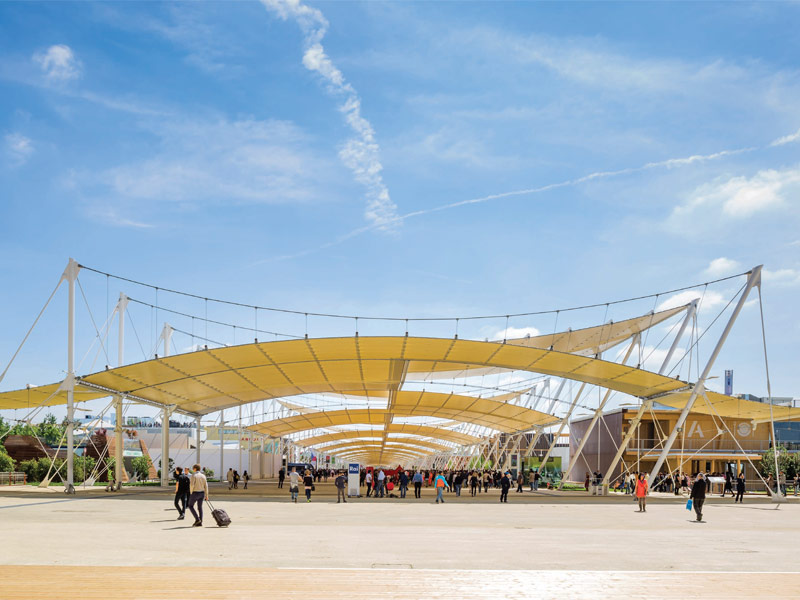 Milan Expo 2015 offered an indigestible banquet of overblown audio-visual gimmicks and kitsch excess, with huge inconsistencies of architectural and design innovation and liberal helpings of blatant self-promotion. And yet there was much to intrigue and entertain. Veronica Simpson reaches for the Rennies….

The long gestation of Milan Expo 2015 has not been an easy one, marred by tales of corruption, confusion (over purpose and vision), high-profile departures and public protests over the waste of vital resources. Negative publicity has been rife, not just from Italy's strident No-Expo campaigners struggling to stomach the doubling of the Expo construction bill (currently estimated at €1.3bn/£930m) in a time of austerity, but also from civic leaders from various recession/poverty-afflicted nations who question the justification of having a presence at this global trading and promotion party while their countries' economies are barely functional. Right up to the 'soft' opening (1 May -- with the official opening delayed until 9 May) the world's media was awash with the usual horror stories of vital infrastructure not in place and pavilions unfinished. But the actual experience of it come opening day was far better than we had been led to believe. Perhaps there is something to be said for lowering expectation.

Trains were disgorged into a splendidly spacious new Rho Fiero station, with clear routes through and up to the vast numbers of security gates where people queued no longer than 10 minutes, even at peak time on Saturday morning (2 May) when the Milanese joined the tourists in their thousands to see what kind of a fist their nation had made of this giant national showcase. A vast and muscular network of airy perforated steel staircases, walkways and bridges lift visitors up and funnel them round into the Expo site. And the site itself, with each pavilion laid out along a clear 'fish spine' of an avenue from tail to tip, is legible and navigable (though pity the pavilions off the side routes, which were too easy to overlook).

It is a huge shame that the vision espoused by the initial Milan Expo team of Jacques Herzog, Stefano Boeri, Ricky Burdett and William McDonough of an Expo underpinned by strong and thematically rigorous content rather than flourishes of architectural excess has clearly been diluted or completely ignored by many of the nations present. They campaigned for an entire Expo dedicated to showcasing bold or pragmatic solutions to the current imbalances in food production and consumption, and the practices and policies that fuel them. The 'obsolete vanity fair' Herzog wished to avoid -- of countries going all out for flagrant self-promotion -- is in evidence at every turn. But several of the pavilions' interior exhibitions are genuinely trying to get the sustainability conversation going, albeit with a massive diversity in the levels of insight, information or clarity of communication.

There are even a few that have managed to deploy all their architecture and design talents in the service of one big and worthwhile idea: the UK, for example, with its subtle, inspirational journey through the life and environmental legacy of a bee; and Austria's message about the value of air quality and the possibility of 're-greening' the urban environment was conveyed with near-miraculous efficiency through the creation of a moist, fragrant slice of Austrian forest into the overheated environment of the Expo.

Even if individual pavilions were largely incapable of toeing the Expo's 'party line' and stay on topic, you might hope that the key issues would be reflected in the Expo management's selection and deployment of partner brands. Not so much. Let's not even attempt to justify the presence of Coca-Cola, likewise McDonald's, with a gut-busting mammoth of a pavilion, the size of four football pitches. There is also something slightly galling -- though more understandable, given their strength as Italian brands -- about the prominent and repeated exposure being given to Baci, Ferrero and Nutella. Would it be churlish to say that luxury chocolate items entirely lacking in nutrition surely have no place promoting the hell out of themselves at an Expo nominally dedicated to a re-examination of our relationship to food -- who has too much of it, who doesn't have enough, and how we can rebalance the distribution?

It was similarly off-putting to find a winsome, white-shingled barn of a structure belonging to the only bank allowed a pavilion on the Expo site. What's a bank doing at 'feeding the planet' Expo Milan 2015, but the structure is seductive. Created by Michele di Lucchi (also creator of Pavilion Zero), the €2.5m confection is shaped like a barn, held up by 13 fir 'portals' and covered in 6,370 polished white wood shingles, inspired by ancient rustic dwellings. The bank's MD apparently set aside €30m for 250 cultural performances and debates (opera, piano recitals, dance, et cetera) and will host 400 companies in their networking spaces during the Expo's six months; presumably it was tax deductible. Perhaps the Italian government was simply grateful that the bank was stepping in to provide the kind of cultural entertainment its own echoing coffers couldn't stretch to.

The Expo, however, is not just about pavilions and pointless diversions. It provides each participating nation with an unparalleled opportunity to network, mingle and share knowledge with key figures from its neighbouring Expo residents' political, civic and commercial elite, and set the agenda for wider discussions on the way the planet's resources are harvested and maintained.

The American pavilion -- a pumped-up structure on steroids -- has been honest enough to admit in its exhibition content to the self-inflicted ailments that American fast-food culture has encouraged -- albeit along rather parsimonious 'we must teach everyone how to eat better' lines rather than 'wow, we really messed up our own and increasingly the world's eating habits with this fast-food invention'. Hats off, however, for going far and wide in its examination of food production, food culture and policy in its exhibition within the pavilion. A Corriere della Serra newspaper special on 2 May rather waspishly pointed out that a third of the food produced in the world is never eaten, and the USA -- the land of giant portions -- is one of the worst offenders. It allegedly destroys 60 million tonnes of food every year - $160bn of the $400bn of produce wasted each year.

There was a prevalence of meaningless technological flim-flammery. Giant, pop-promo-like footage of indigenous scenery on vast LED screens was substituted for content in many cases. Interactive elements were usually purely for distraction or immersive effect, rarely to further insight or interest in the underlying issues. One of the most affecting interactives was from Save the Children, whose simple village of pavilions invited you to go on a 'day in the life of' journey with a child by picking out their name on a wristband. Then, by following a sequence of onscreen dialogues/discussions with volunteers you could discover how their life is impacted by the issues over food, malnutrition and emergency services typical of their region.

There isn't much disclosure on the sustainability of any of the pavilions, their construction or operation. The organisers boast about so many having being made of wood. But there is no information on where the wood was sourced from, how it got there and where it's going when the show is over...

There are some innovations aimed at supporting a more ethical Expo: for example, the creation of 'clusters' -- large pavilion villages dedicated to one food-related topic (rice, coffee), with smaller cubicles offered to relevant producing smaller or poorer countries.

There is also a small cluster of pavilions in an area dedicated to 'civil society'. Hundreds of Italian welfare organisations are scheduled to converge here for a presentation of the 'Living Earth Manifesto' on sustainable and small-scale agriculture, developed by the vice president of the Slow Food Movement, Vandana Shiva. Despite her public criticisms of it, she told the Corriere della Serra: 'The Expo, with all of its contradictions, remains a key moment for discussion.' The Slow Food movement also has a trio of pavilions - the simplest of wood structures designed by Herzog & de Meuron for education, refreshment and lectures. Carlo Petrini, the Italian figurehead for the movement is planning to invite 'thousand of farmers, breeders and fishermen from all over the world to the Expo...who, when put together, [are] the largest food multinational on the planet'. They at least will be able to contribute to the debate.

Legacy
So what's going to happen to this one million interconnected square-metre site with relatively strong infrastructure? Waterways and planting will remain. But who will look after them if no actual use for the site has been found? A university and innovation district has been proposed but not agreed.

There will be a big event at the end of the Expo, in October, presenting the Charter of Milan -- a document about the right to food, the fight against waste, and a commitment to greater environmental sustainability, painstakingly developed by the Italian government, institutions, business and associations; it will hopefully be signed by many of the visiting nations.

An army of volunteers, particularly young Italians, are working on the Expo, with each volunteer doing five-hour shifts for a maximum of two weeks (many of them are under 24). They will be exposed to many ideas and cultures as ambassadors and visitors, and that will leave its mark.

We can only hope that the countless debates, discussions and opportune encounters between food producers, policy makers and consumers will help to further the debate and the spirit of international co-operation.

On that final point, here is one last, heart-warming story revealed by John Kennedy, the commissioner for the Irish pavilion, sited next door to the unfinished Nepalese pavilion. Apparently all the Nepalese workers left for home the minute they heard about the atrocious earthquake that hit at the end of April, in order to help with the relief and reconstruction effort. The Italian workers immediately volunteered to finish the job for them. And apparently were doing so.

What did Kennedy, who has commissioned four Expos for Ireland in the past two and a half decades, think of this one? He said: 'I have great confidence in Italy's capacity to pull itself together. Good Expos have been less than certain at this stage before.' Let's hope he's right and the participating nations will have something to show for all the fuss (including the opening-day riots in Milan city centre), the expense and the effort.