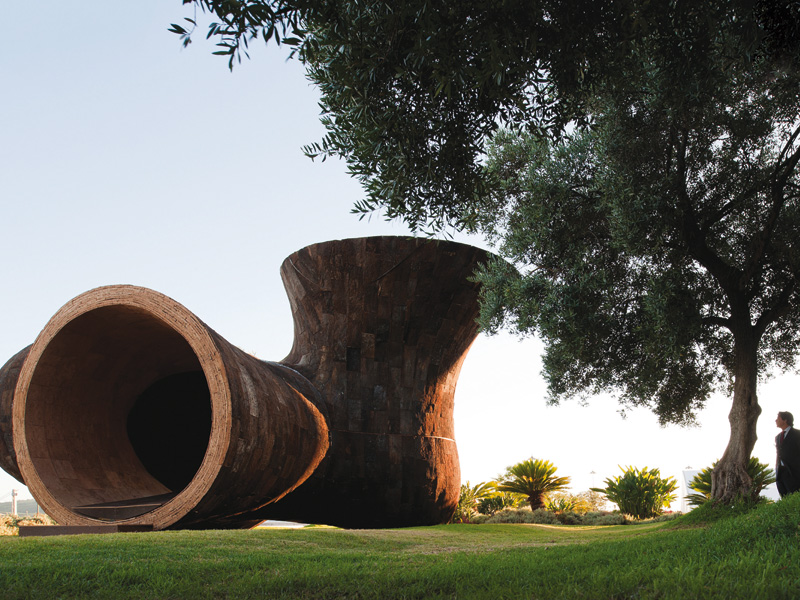 Miguel Arruda studied sculpture at Lisbon’s Faculty of Fine Arts, where he would later become a professor, and serves as chair of its board of directors. He studied architecture at Lisbon’s Technical University. He is a furniture designer for several international houses, and he was the subject of a 2013 retrospective at Portugal’s fashion and design museum MUDE. He talked with Herbert Wright about the library at Vila Franca.

Blueprint: What were the considerations that you brought into the conceptual stage of the design?
Arruda: The volumetric aspect of the pre-existing rice factory, the proximity of the Tagus river, the programme for the library, and finally the desire to produce a building that would be put to good use by the population.

Blueprint: So the river makes the design very site specific?
Arruda: Yes, this is the first time the people have had the possibility to enjoy the view of the river and the city at the same time. Blueprint: But the context is also the adjacent old buildings, and the traditional townscape across the tracks. The library is in direct contrast to that.
Arruda: The shock of the new is important.

Blueprint: The design trend is to dispel the exclusivity, academic elitism and silence of the traditional library experience. How have you addressed that?
Arruda: My job is to build for every class, to receive everyone as equal. This library is a democratic space, open to the people. There is not the typical silence of a library; it's not a cemetery. Blueprint: How is the library spatially organised?
Arruda: Beyond the traditional areas of reading and more casual media elements such as newspapers, magazines and films, there's an area of considerable size for children, a cafeteria zone, and a room for exhibitions. On floor zero is a multiuse space to be utilised as an auditorium. But to fight against it being too sectored, and contribute to a bigger and effective relationship between the users of this space, all the floors are naturally placed over each other, spatially detached in a way that offers visual contact between them. This spatial concept allows each user to be a spectator and an actor in this space at the same time. Blueprint: The library floors become terraces facing one corner, creating clear lines of sight between them and positions across from them. Spatially and visually, what does this do to the library experience?
Arruda: The gap derived from the layering of different floors generates a void with a very clear vertical aspect. This is the main dynamic element of the spatial concept. It is reinforced by the great triangular window. It's a space of communication. For the user, it is 'I see and I am seen'.

Blueprint: The dramatic atrium void is unusual in that it is so open to the exterior, and the other side reveals the town through the windows. Again, how does this alter the library experience?
Arruda: We want to offer a new way of reading the surrounding landscape through the glass surfaces expressed as triangles and trapezoids. Triangular windows alter people's perceptions. Blueprint: Vila Franca is a working-class town. What role does a 'word factory' with a cultural programme play in such a place?
Arruda: It has a pedagogic relationship with the town. We want to improve the intellectual and cultural life of the town. The library is a cultural upgrade!