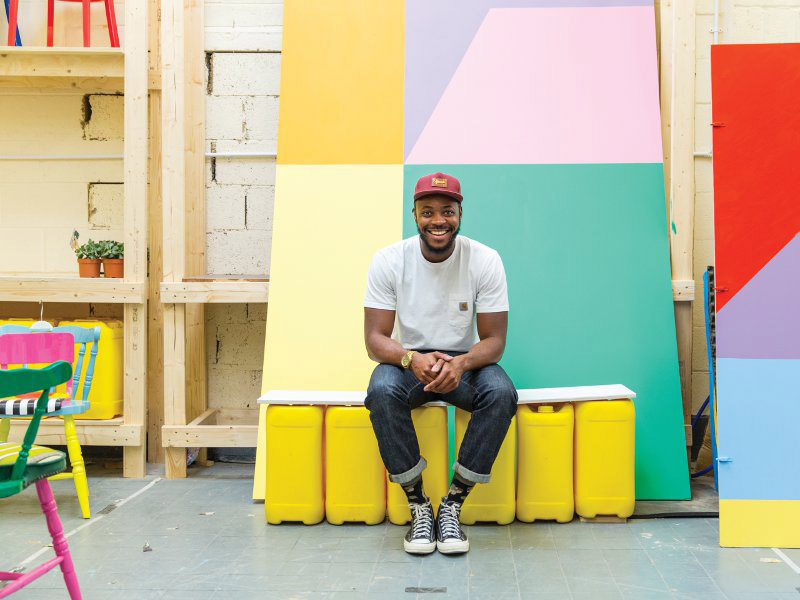 Yinka Ilori, furniture upcycler and star of LDF 2017, talks to Blueprint about storytelling, colour and identity in design

Who: Yinka Ilori
What:  Furniture designer
Where:  London, UK

Most people who upcycle are driven by motives that can broadly be described as ‘save the planet’ or ‘save the pennies’. But these aren’t the reasons why Yinka Ilori got into furniture upcycling.

‘For me, it’s about the stories, the memories of these pieces of furniture,’ the 30-year old Londoner explains over breakfast at a Notting Hill cafe. ‘Who sat in that chair? Where did they come from? What emotions did they have, what conversations?’ Essentially: if chairs could talk, what would they say?

One of the main stars from this year’s London Design Festival, Ilori’s trademark aesthetic of brightly coloured, playful, statement chairs seems to be everywhere these days. But his work is about so much more than the visual, as Blueprint found out.

The narratives he works with can be allegorical as well as historical. When he was growing up, his parents — both from Nigeria — would speak to him in Yoruba. ‘They would tell me Nigerian parables — words of wisdom basically. At the time I ignored them, but now they form a key part of my work.’ Ilori takes key words from a particular parable and uses those ideas or images in his redesign of a chair to create a narrative, often harnessing Nigerian fabrics in the process. But what if people just see a beautiful chair and don’t understand the symbolism or stories behind it? ‘Well there’s two aspects,’ he reflects. ‘I want my work to make people smile and create a moment of joy. But beyond that, I would love to connect them to a particular narrative and hopefully inspire them.’

Ilori first visited Nigeria when he was 16. ‘Going to Lagos was such a culture shock coming from London: the food, the colours, how people speak,’ he says. ‘Nigerians are very vocal people — they want to be seen and heard. Everyone is happy and proud of who they are.’ It was this positivity, openness, embrace of colour and relationship with objects (‘even breeze blocks are used as seats’, he says) that helped catalyse Ilori’s approach to furniture and colour as expressive tools. ‘Colour is such a huge part of design,’ Ilori insists. ‘Designers forget the human effect it has. People seem scared of using it.’

Ilori studied product design and furniture at London Metropolitan University, discovering inspirational designers in the process such as Jane Atfield and Martino Gamper. After graduating, Ilori worked at Lee Broom briefly, but ultimately knew he wanted to pursue his own style. The Prince’s Trust helped him out with some funding. ‘I made my first collection in my garden! Dad worked at B&Q so helped get me the right tools,’ he recalls.

Having participated over the past few years in Design Miami and Milan Design Week, as well as London Design Festival, it was really this year where Ilori made a splash. He had four projects on show at LDF 2017: his installation Estate Playground outside the Shoreditch citizenM hotel, the Africa Centre show A Large Chair Does Not Make A King, the NOW Gallery installation Not All That Glitters Is Gold, and a collaboration with Shoreditch-based Restoration Station.

Estate Playground — which comprised a brightly coloured slide, seesaw, swing and two chairs — was envisioned as a recreation of the playground in the north London council estate where Ilori grew up. ‘That playground was our public space that gave us a sense of belonging,’ he remembers. ‘It was naturally so diverse and inclusive, but we were just kids so didn’t even think about that. We just played. We had this shitty playground but we didn’t care — for us it was special.’ Although Ilori’s desire to have a piano in the installation — to recreate the music-saturated experience of the estate — was thwarted by restrictions, he still loved it: ‘Just seeing kids play on it made me so happy.’ Installation view of A Large Chair Does Not Make A King at the Africa Centre, 2017

A Large Chair Does Not Make a King included four upcycled chairs on stepped platforms, with ‘inspirational’ literature propped against each chair. ‘I wanted people to just come to the space and read a book on a level with others, to have a conversation together,’ Ilori explains. ‘My work is about status, hierarchy and equality: if we put our achievements and assets to one side, we are all equal. The steps up to the chairs symbolise a journey.’

He also collaborated with Restoration Station — a social enterprise that engages recovering addicts in restoring furniture. ‘When I discovered them, I was blown away by their work,’ he says. ‘I’ve always wanted to give back, to work with the community.’ Ilori worked with eight recovering ‘trainees’ over a month, collaboratively upcycling pieces of second-hand furniture into new designs, which were then auctioned off in support of Restoration Station. ‘The participants were so excited and proud that their chairs were being bidded on,’ he remembers happily. 'It was amazing.'

So what’s next? Ilori can’t say much, but mentions an upcoming pop-up space with Unilever, a ‘sensory installation’ in Milton Keynes and a project in Sweden (he confirms it’s not with IKEA, even though he is a fan of its ‘democratic design’ and would love to collaborate). ‘I’ll be doing more interior spaces next year,’ he teases, ‘not just chairs.’ But he’s also keeping his eye out for ‘another community project on a larger scale’, having loved the project with Restoration Station.

Ilori’s work, with its bright colours, playful forms and rich narratives, exudes positivity — and so does he. ‘I love talking to people,’ Ilori says, grinning. ‘But somehow that’s weird in London. I think we should do a lot more talking and engaging.’ And who knows — that might just start with a chair.