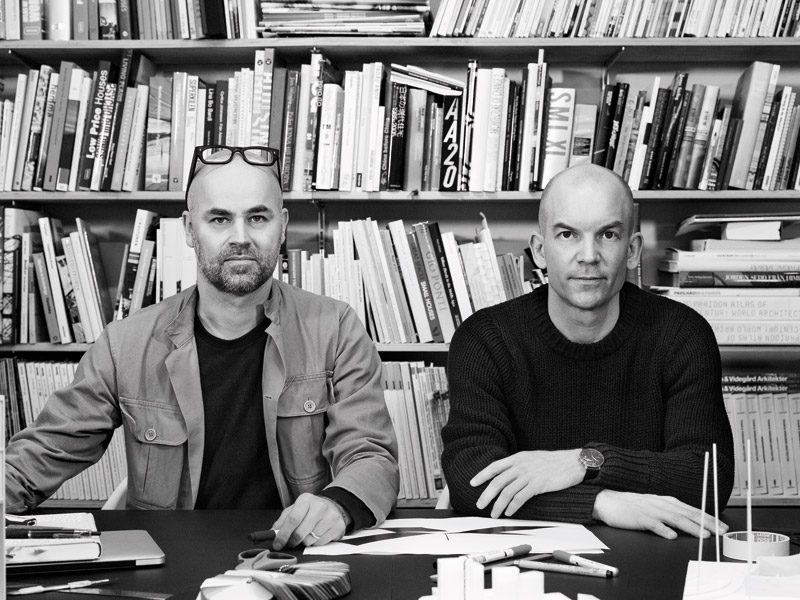 Cate St Hill gets to know Swedish practice Tham & Videgård Arkitekter, which has just completed a curvaceous new school of architecture in Stockholm

Who Bolle Tham and Martin Videgård; plus 13 staff

Bolle Tham and Martin Videgård first met at architecture school in Stockholm more than 25 years ago, before collaborating on a major competition for a public library in Finland. They didn't win, but it set in motion a meeting of minds concerned with architecture that is inclusive, tying together extensive research, theoretical details, social issues and the long-term building quality into the design process. From its small studio - or atelier as they like to call it (there's no admin or receptionists) - Tham & Videgård Arkitekter has developed an array of public, educational and exhibition buildings.

The practice's first project to gain attention was the Kalmar Museum of Art in southern Sweden in 2008. This compact, four-storey black cube, punctuated by large, glazed openings offering views across the city park, won the practice a host of accolades and awards, including the Mies van der Rohe Award in 2009 and the Kasper Salin, the Swedish Association of Architects' prestigious award for the best new architecture in Sweden in 2008. The Moderna Museet in Malmö (2009) followed, a vibrant and decidedly modern, perforated, orange extension attached to a defunct, red-brick electricity station. The New School of Architecture at the Royal Institute of Technology, Stockholm (2015). Photo:Jonas Lindström

Added to this is an eclectic motley crew of buildings that make up the practice's current portfolio: a sunshine-yellow nursery school (2010) in Stockholm, a 4m x 4m x 4m mirrored tree-house hotel suspended around a tree trunk in Harads (2010) and a multiple pitched-roof concrete summerhouse (2013) on Stockholm's archipelago. While not afraid to use a splash of unashamedly bright colour, Tham & Videgård's architecture, with a typically Swedish concern for context and site, is at once considered, rigorous and functional. 'We have a sort of pragmatic approach towards architecture, finding solutions that solve many things at the same time,' says Videgård. 'It's very much about distillation, refining an idea so it's buildable but still very strong in its spatial experience. It's something we look for all the time - what is the most direct answer to the brief?'

At the end of last year Tham & Videgård completed the New School of Architecture at the Royal Institute of Technology (KTH), which also won the practice another Kasper Salin Prize. A smooth, curvaceous, six-storey building, clad in deep orange Corten steel and inserted into an existing courtyard, it was something of a labour of love for the practice, developed over a period of eight years.

'We won the competition just before the opening of the Kalmar Museum of Art when we were still a small office; in a way the practice has grown together with this project,' says Videgård. Focusing on how people move around the space, curved walls encourage a free flow of circulation and enhance a sense of openness, creating 'an atmosphere that is less formal and less ordered, more akin to how spaces could interconnect in a landscape than a traditional institutional building,' explains Tham. Continuing the theme of university buildings for the arts, the practice has also recently finished a new, barrel-arched building for the Krabbesholm School of Art, Architecture and Design (unphotographed at the time of publication) in Skive, Denmark - its first project outside of Sweden - and is currently working on a group of buildings for the University of Gothenburg's faculty of fine arts.

As well as doing two or three private houses every year - 'we always like to have a mix of scales. It's nice to have smaller projects because they give us the opportunity to experiment and try things out' - Tham & Videgård's focus is now on public buildings and, where possible in the future, beyond Sweden. Says Tham: 'The interesting thing about working with a public building is that it affects many people, and that influences the character of a city.' Last year the practice lost out in an invited competition to design a new Bauhaus museum in Berlin, but following a solo exhibition at the Galerie d'Architecture in Paris (2014) as well as a part in the Nordic Pavilion at the Venice Architecture Biennale (2012), it surely won't be long before the practice makes its mark on the rest of Europe.