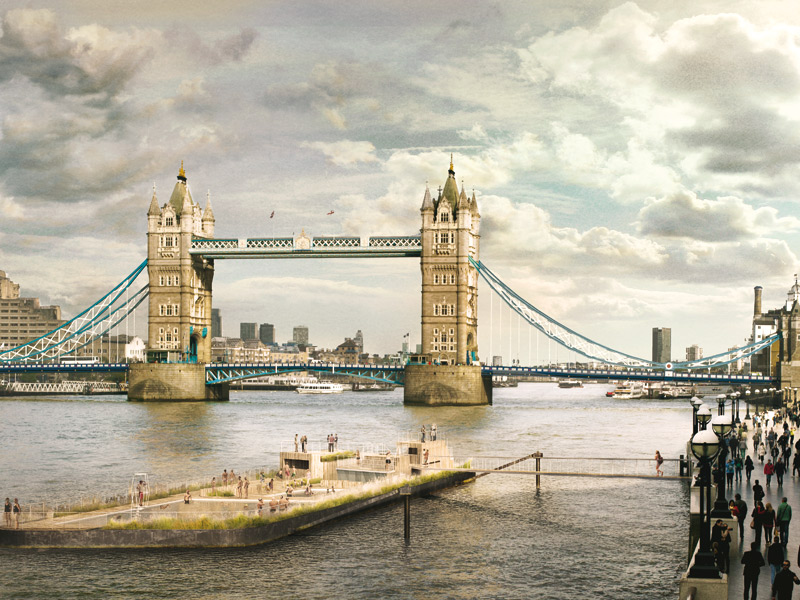 Who: Directors Chris Romer-Lee and James Lowe; plus four staff
What: architecture and social enterprise thames Baths CIC
Where: London
When: Founded 2003

When Chris Romer-Lee and James Lowe founded their practice in 2003, the name Studio Octopi was chosen with reference to an octopus, symbolising the way the practice could turn its hand to all manner of different projects. 'It seemed we were establishing ourselves as one of those multidisciplinary practices that were so popular back then. We added "Studio" to the front to ensure we were not mistaken for marine biologists,' notes Romer-Lee. Little did the pair know that more than 10 years later its portfolio would expand from graphic design and house extensions to, rather fittingly, a range of water-based projects, including a proposal to reintroduce swimming in the Thames, and a new lido at Peckham Rye.

But, rather than being pigeonholed, Studio Octopi is still selective over what it works on, and prefers a quality-not-quantity approach: 'We choose the projects we work on.' Projects frequently work with existing buildings; like archaeologists, the practice peels back the layers of history, creating charming, unassuming but elegant spaces with discrete details and a sense of place. Its project for non-profit arts organisation the Delfina Foundation sensitively transformed two Edwardian townhouses in London into a 418 sq m space for eight artists-in-residence as well as exhibitions and events (2014). It was shortlisted last year for Best Interior Project in the inaugural Blueprint Awards. Responding to the role of the foundation as a provider of 'homes' for artists, Studio Octopi retained and subtly exposed original domestic features with a light and considered touch.

'We've always been about actually building things,' says Romer-Lee. 'Our scheme wasn't showy - it was a bit of a change in direction for us. We had previously completed Park Avenue, a black, folded-zinc extension in north London; we somehow had to get it out of our system. Now we go for a more reserved, contextual approach.'

Another project in 2014 restored a run-down, 1000-seat amphitheatre for Bradfield College, an independent school in the Berkshire countryside that stages a Greek play every three years. Sitting in a disused chalk quarry, the amphitheatre now has a new cantilevered platform and piazza looking over the bowl. Currently, Studio Octopi is working on a £4m new-build house for a graphic designer in Surrey - its biggest project to date - an intriguing but, for the moment, hush-hush project with a Turner Prize-winning artist, and a 4,600 sq m office for an advertising agency in Old Street. 'We like to mix up projects that take forever to realise, such as Thames Baths, with projects that are quicker. It keeps the practice young,' says Romer-Lee. The practice has also just started at the newly formed London School of Architecture, one of 50 UK practices mentoring and training students as part of the two-year postgraduate course.

Meanwhile, in January it won an invited competition to reinstate Peckham Rye Lido on Peckham Rye Common. The site has a long history of swimming; in the 1800s there was a bathing pond, while in the Twenties, a 50m-long lido was built, closing in 1987. Studio Octopi's design proposes a similar-sized, heated and chlorinated pool with the possibility of a smaller natural pool drawing water from one of London's lost rivers, the Peck, running directly under the site. A crowdfunding campaign is due to start this November to raise funds. The project for the Thames Baths came out of an open-call ideas competition, titled London As It Could Be Now, developed by The Architecture Foundation and Royal Academy of Arts. Studio Octopi was selected as one of five groups to work up new visions for the Thames. 'At the time I was swimming in a lake in Zurich and put two and two together: if the Swiss are swimming in their city-centre lake and river, why can't we in the Thames?' says Romer-Lee. The proposals feature a pontoon of floating, natural swimming baths that would utilise either freshwater or recycled rainwater.

At the moment plans are focused on locations on the South Bank and at Temple Stairs, but the idea is that the floating pools could be replicated and licensed in cities across the UK and worldwide.

Last year a Kickstarter campaign raised £142,000 in 30 days with more than 1,200 backers, and Studio Octopi has already had enquiries from Australia to Seattle. There have also been conversations with a swimwear brand about sponsorship. Says Romer-Lee: 'The project has opened doors and we've had conversations that we never thought we would be having. We now have the technology to filter Thames water and have been working with a marine engineer.' And will it happen? 'It's when, not if,' Romer-Lee assures, with confidence.