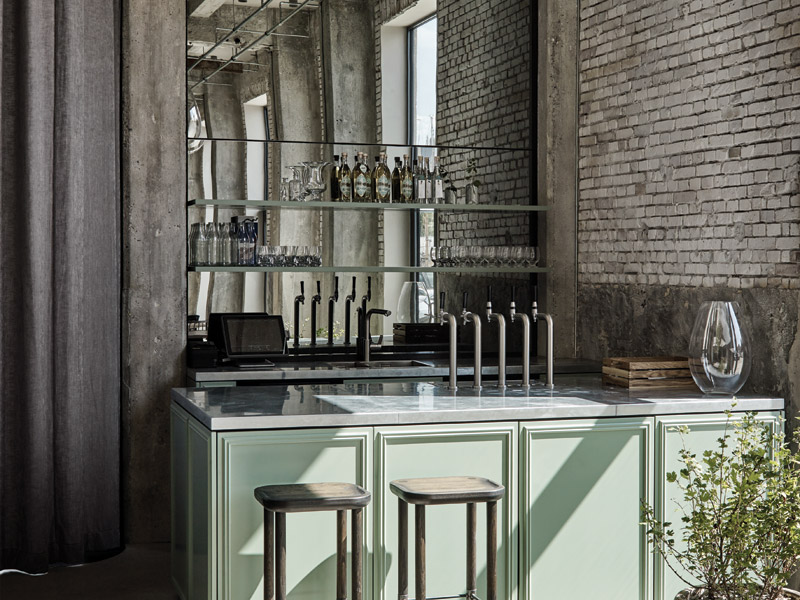 Multidisciplinary Danish studio SPACE Copenhagen talks us through its intuitive, emotive way of working that has resulted in an array of interior design, furniture and objects

Who
Peter Bundgaard Rützou and Signe Bindslev Henriksen; plus 14 staff

What
Interior design and furniture

If there’s such a thing as slow living and slow eating, then SPACE Copenhagen, the quiet, sincere design duo behind world-famous restaurants such as noma, Geranium and Geist is practicing slow working. That doesn’t mean it’s not churning out the work, on the contrary - indeed, it produced no less then half a dozen furniture collections in 2016 alone, and that’s not counting the various interior projects too - but, SPACE’s focused, thoughtful process means it’s constantly questioning, investigating possibilities, opening up conversations and delving into the finer details of projects. ‘What we do is not industrialised,’ explains co-founder Peter Bundgaard Rützou. Rützou and Signe Bindslev Henriksen first met while studying at the School of Architecture at The Royal Danish Academy of Fine Arts, before going their separate ways and becoming direct competitors in Copenhagen’s interior design world. They joined forces in 2005. ‘We had mutual interests but also frustrations around the same subjects,’ says Henriksen. ‘We found that it was a theoretical education in many ways. When we came out of school we tried to incorporate something more intuitive and unpredictable, which forces you to investigate how you engage with spaces, the actual surroundings that you are placed in, how we as human beings actually interact, not from an aesthetic point of view but from a mental wellbeing point of view. We try to push ourselves and ask these questions all the time; they’re actually extremely banal but they relate to human nature, the human mind and aspirations.’ SPACE brings this instinctual, emotive way of working to everything from furniture, lighting and objects, through art installations and direction, to private homes, hotels and restaurants. Its projects are imbued with this perceptive, hardto- quantify factor, which Rützou likes to describe as a ‘third component’, aside from the client and site context, ‘which doesn’t really belong to anyone, it belongs to everyone. It’s all about basic instincts, it’s a relationship everyone shares with just being present, it’s geometry, texture, soft feel, touch that project a certain set of emotions.’ Respecting their Scandinavian heritage it translates into interiors that are modern, warm and authentic, fusing the classic with the industrial, the rustic with the minimal, and furniture that uses natural materials and meticulous craftsmanship.

From the revolutionary noma in Copenhagen for René Redzepi in 2012, SPACE has gone on to design a string of high-end hospitality projects, including the all-black Restaurant Kul (2014) in Copenhagen and the 200-room boutique hotel 11 Howard in New York (2016), as well as showrooms for furniture brands Fritz Hansen (2008) and Dinesen (2009). Alongside these are furniture collections for Fredericia, Gubi, Mater and Stellar Works, the Fly chair for &tradition in 2013 being perhaps the most recognisable. SPACE’s most recently completed project is Restaurant 108, also for Redzepi, housed in a converted industrial warehouse in Christianshavn, with exposed concrete structural elements and bespoke furniture in dark oak with blackened steel. SPACE is currently working on the interiors for a new hotel and two restaurants at the 42-storey Manhattan Loft Gardens, designed by SOM in East London’s Stratford. Due to be completed in 2018, it’s the studio’s biggest project yet. Says Rützou: ‘What differentiates this with anything else we’ve done is that the area has a void of history. It feels both scary and a privilege to embark on this journey with the client and try to be a part of writing an identity. If you have a beautiful building in the centre of the city it’s limited to how wrong it can go, but this is a little bit out there - we’re using all our wit and curiosity to see what this could become.’