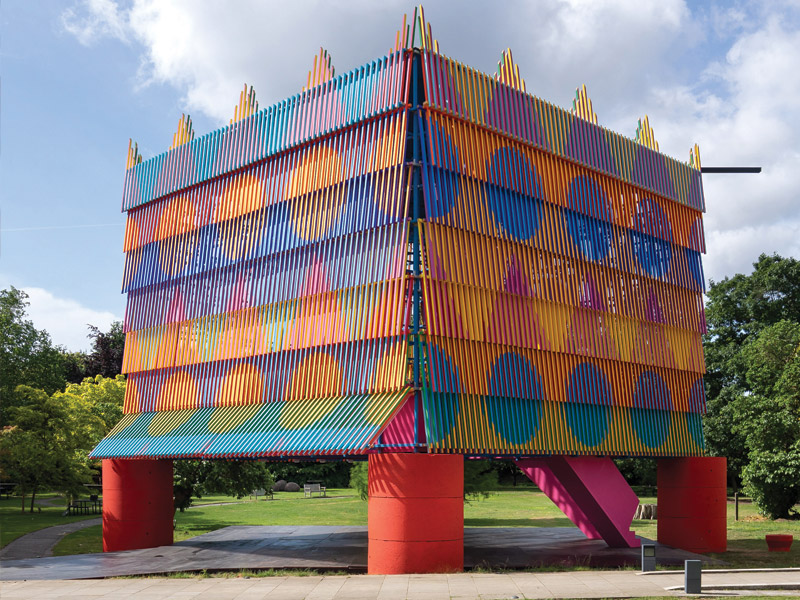 ‘People realise we take ideas quite seriously now,’ says Alex Gore, co-founder along with Dingle Price of emerging, east London-based architecture practice Pricegore. He is reflecting on the impact of the practice’s highest-profile commission to date: the second edition of the Dulwich Pavilion, a biennial project at the Dulwich Picture Gallery launched in association with the London Festival of Architecture in 2017. This year’s colourful, attention-grabbing timber pavilion was created by the duo in collaboration with designer Yinka Ilori (Blueprint 355). ‘We had almost no public presence before,’ says Price. ‘Now we have visibility.’

Price and Gore met studying together at The Cass, and after stints at various practices set up Pricegore in 2013. Their team currently includes two architectural assistants. On the day we meet, they are busy moving in to their new studio in Dalston, having relocated from Peckham to have more space. Asked to describe the practice’s work, Price says it is ‘research-based, non-dogmatic and nonstylistic’. He continues: ‘We look at the physical, social, historical context of each project. Through that research, the language of that architecture evolves.’ Prior to the pavilion commission, Pricegore established itself with a range of small residential and cultural projects, from private studios and apartments in Cecilia Road in Hackney (2014), to Whitefriars Studios in Harrow (2017) for the arts charity Acava. It was through the Whitefriars project that the duo met Ilori, one of the studios’ first tenants, and saw his work. But the decision to enter the Dulwich Pavilion competition together wasn’t planned. In fact, it was all very last minute. ‘It was the day before the deadline. We decided to call Yinka up and we threw something together,’ admits Price.

The expression of interest simply focused on the designers’ shared interest in ‘objects that tell stories’. Then the conversation developed ‘around this idea of finding parallels between our work’, says Gore. ‘It became clear through our discussions that Yinka’s Nigerian heritage was a key element in his work.’ The trio realised, in response to the brief of creating a welcoming pavilion that expressed London’s identity, that ‘we could do something that was drawing on that Nigerian heritage but also fundamentally about London’, says Price, reflecting on how the practice’s former studio was next to Peckham’s Rye Lane, known informally as ‘Little Lagos’. Together the three designers undertook extensive research. ‘We started looking for architectural and cultural parallels between Nigeria and Europe,’ says Price. ‘Two things that came up were the use of geometric patterns on facades, and making delicate buildings out of sticks and raising them up off the ground.’ Thus the design for the project evolved.

The pavilion, conceived as an events space, takes the form of a cube assembled from thousands of pieces of hand-painted timber, raised up on four concrete staddle stones, referencing the typology of raised grain stores. ‘That idea of creating monumental “feet” preceded everything,’ says Price. Fabric markets in Lagos and Peckham were another big influence: ‘The woven stick facade recalls the hanging of fabrics on wooden frames in those markets,’ says Price. The geometric, colourful, fabric-like pattern was painted on to this stick facade. Once inside the pavilion, a complete immersion of colour, visitors can ascend to an internal perimeter gantry, overlooking a ‘stage’ below. The duo explains that the design prioritises flexibility and generosity of use. ‘It feels like a theatre — that’s how we’ve always talked about it,’ says Gore. ‘The pavilion shouldn’t be the event,’ adds Price. ‘It should be calling people to an event.’ Whitefriars Studios (2017) in Harrow, a complex of spaces for the arts charity Acava. Credit: Matt Taylor

A narrative relationship to its neighbour — the Dulwich Picture Gallery designed by John Soane (opened in 1817) — was also central to the project. The pavilion imagines that Soane had expanded his Grand Tour, the international travels which inspired and informed the development of his work, to West Africa. ‘Soane created architecture drawing on diverse references,’ says Price. ‘So it felt like a naturally Soanian thing for us to do.’ Though the pavilion visually appears dramatically different to the gallery, there are yet more references to Soane in its design. ‘The pavilion is a perfect cube,’ says Price. ‘The cellular structure of that is metre cubes. It’s a series of cubes within cubes. All of that geometry ties back to the Soane building, which includes cubes and double cubes in the design.’

Most of the practice’s projects so far have been delivered within a tight budget. Describing the Whitefriars Studios project, Price comments: ‘We learnt how to work with extreme economy — and how you can still generate significant architecture regardless of that.’ This is something the duo clearly applied alongside Ilori in the creation of the pavilion, which also demanded a fast-paced development and delivery timeline.

So what now? The pavilion will remain open, hosting events and visitors, until 22 September, and it is hoped there will be a new home for it after Dulwich (The Modern House is working with Dulwich Picture Gallery to sell it). Meanwhile, the practice has other projects to continue with. There are some residential schemes including a six-bed detached house in Cockfosters and two pre-planning groups of homes in south-west England. The practice has also recently been commissioned to do a feasibility study for the expansion of Primary, a non-profit art studio complex in Nottingham. Another cultural project, a fashion archive and incubator space, may also be on the horizon if all goes well.

For years Pricegore has been entering competitions for large and ambitious cultural projects elsewhere in Europe. ‘We want to be a European practice,’ says Price. ‘Opportunities for young emerging practices are better [in mainland Europe].’ Perhaps now the pavilion will be the catalyst for some more competition wins, giving Pricegore the opportunity to demonstrate its range, expand its portfiolio — and work with bigger budgets.

This article was originally published in Blueprint issue 365. You can buy a copy here, or subscribe to Blueprint